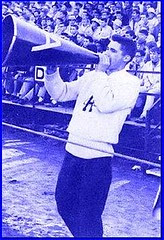 
Because the Terrorists® and Evildoers® just don't have enough high-value targets in the U.S. of A.

Not content to have single-handedly revived the anti-war movement, George Bush the Second is now embarked on his quest for more nucular (or nuclear) power to revive the musical careers of Jackson Browne, Bonnie Raitt, and everyone else who reached the peak of their fame at the No Nukes concerts in 1979.

It's bad enough that he had to remind the country what it felt like to live through Vietnam. If you want to know what it felt like to be working in Manhattan on the day Three Mile Island was threatening to melt down and send its radiation east, I'll be glad to relate the story.
True Blue Liberal
UPDATE (23 June 05 @ 7:45 am edt): Interestingly, if you had clicked on any of the words from Cheerleader George's cheer up above when this was first posted yesterday, you would have seen a washingtonpost.com headline that said something like "Bush pushes for more nuclear power plants" (despite my quotation marks, I'm paraphrasing broadly), but click on NUKES NUKES NUKES this morning and you'll find a vaguely similar article about the visit to the nuclear power plant with the headline "Bush Expresses Empathy With Workers: At Md. Nuclear Plant, He Talks About the Economy's Impact"! WTF? The mention of the call for more nuclear power plants, which was prominent, is now short and buried in the bottom of the article. This isn't the first time the Post has done this to one of my links, so be careful when linking to them.
Posted by True Blue Liberal at 6/22/2005 02:56:00 PM