It's been too long since we posted a True Blue Liberal bible verse here on this blog, but the golden T***p statue displayed in Orlando this weekend at #CPAC2021 demands a reference to Exodus chapter 32. 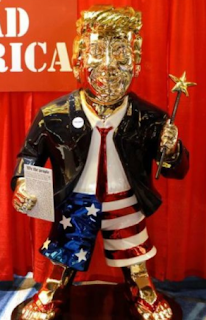 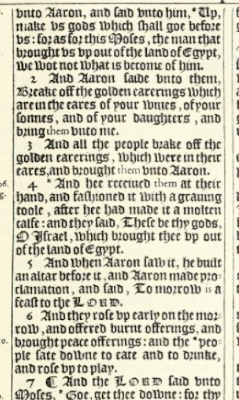 Exodus Chapter 32
When the people saw that Moses delayed to come down out of the mount, the people gathered themselves together unto Aaron and said unto him, Up, make us gods which shall go before us : for as for this Moses, the man that brought us up out of the land of Egypt, we wot not what is become of him.
2   And Aaron saide unto them, Breake off the golden earerings which are in the eares of your wives, of your sonnes, and of your daughters, and bring them unto me.
3   So all the people brake off the golden earerings, which were in their eares and brought them unto Aaron.
4   And he received them at their hand, and fashioned it with a graving toole, and he had made it a golden calfe : and they said, These are thy gods, O Israel, which brought thee up out of the land of Egypt!
5  And when Aaron saw it, he built an altar before it, and Aaron made proclamation, and said, Tomorrow is a feast to the LORD.
6  And they rose up early on the morrow, and offered burnt offerings, and brought peace offerings : and the people sate downe to eate and drinke and rose up to play.

This is taken, of course, from the 1611 King James Version, known here at trueblueliberal.org as "The Real Bible For Real Christians."
More video of the overstuffed golden calfe of 2021:
Posted by True Blue Liberal at 2/27/2021 11:54:00 AM No comments:

POLL:
Should the meeting of #Cult45 zealots taking place in Orlando this weekend be officially known as #CPAQ or #QPAC?

Here's your reminder that the object of abject veneration at #QPAC 2021 (or maybe it's #CPAQ) refused their invitation in 2016 and held his own rally because he was mad at #CPAC 2016's star and favorite presidential candidate, "L-Y-E-N" Ted Cruz.