Once might have been another typo; twice shows an inability to spell simple words.

Although, of course, President Trump could sign an executive order changing the official American spellings of both lightweight and choker. 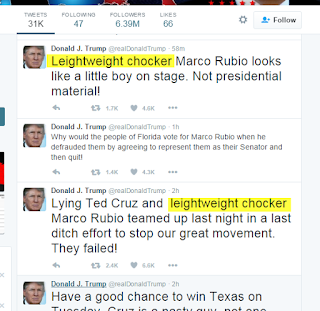 And we thought Dan Qualye's Potatoe was embarrassing to the Republican Party and the nation.

As long as taxes, their routine avoidance by rich American businessmen, and hidden tax returns are back in the news, this quotation from the Gospel of Mark seemed to be the appropriate True Blue Liberal bible lesson for the day. 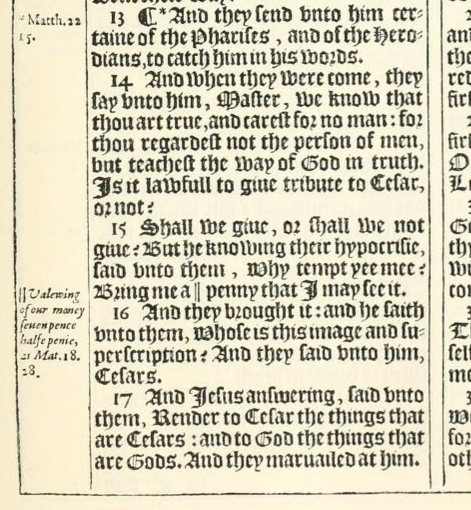 Mark 11:13 And they send unto him certaine of the Pharises, and of the Herodians, to catch him in his words.
14 And when they were come, they say unto him, Master, we know that thou art true, and carest for no man : for thou regardest not the person of men, but teachest the way of God in truth. Is it lawfull to give tribute to Cesar, or not?
15 Shall we give, or shall we not give? But he knowing their hypocrisie, said unto them, Why tempt yee mee? Bring me a penny, that I may see it.
16 And they brought it : and he saith unto them, Whose is this image and superscription? And they said unto him, Cesars.
17 And Jesus answering, said unto them, Render to Cesar the things that are Cesars : and to God the things that are Gods. And they marvailed at him.


This is taken, of course, from the 1611 King James Version, known here at trueblueliberal.org as "The Real Bible For Real Christians."


I don't feel I need to add anything to this, but Willard "Mitt" Romney, the last uberrich Republican businessman who ran for the White House while going to great lengths to hide his tax returns, is now asking the current uberrich Republican front-runner to come clean on his taxes:

"We have good reason to believe that there's a bombshell in Donald Trump's taxes [...] I think there's something there. Either he's not anywhere near as wealthy as he says he is, or he hasn't been paying the kind of taxes we would expect him to pay. Or perhaps he hasn't been giving money to the vets or the disabled, like he's been telling us he's been doing."


You don't need an essay from me on irony, do you? All I want to add is to suggest that you review some of the many classic 2012 installments in the #MittsMissingReturns saga that appeared here on True Blue Liberal Dot Org:

This is the purpose for which I started TrueBlueLiberal.org in 2004...

...so I take complete credit for this significant rehabilitation of the word 'liberal'!

Proportion of Dem caucus-goers and voters identifying as "liberal":

Today's reading from the only book Donald J. Trump claims to like more than The Art of the Deal 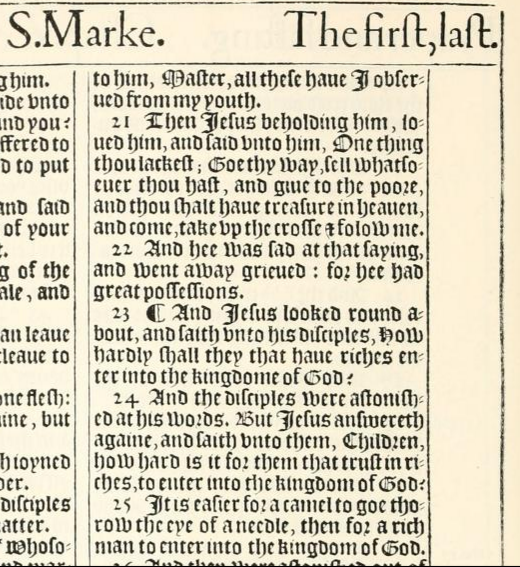 Mark 10:21 Then Jesus beholding him loved him, and said unto him, One thing thou lackest; Goe thy way, sell whatsoever thou hast, and give to the poore, and thou shalt have treasure in heaven, and come, take up the crosse & folow me.
22 And hee was sad at that saying, and went away grieved : for hee had great possessions.


23 And Jesus looked round about, and saith unto his disciples, How hardly shall they that have riches enter into the kingdom of God!


24 And the disciples were astonished at his words. But Jesus answereth again, and saith unto them, Children, how hard is it for them that trust in riches, to enter into the kingdom of God!


25 It is easier for a camel to goe throw the eye of a needle, than for a rich man to enter into the kingdom of God.

This is taken, of course, from the 1611 King James Version, known here at trueblueliberal.org as "The Real Bible For Real Christians."

In the sorry history of interviews with national security hacks from both political parties, this interview with Michael Hayden, former head of both the NSA and the CIA, on All Things Considered tonight has to stand among the worst of many self-serving book tours.


The interview is fairly uniformly odious, but the worst section is when Hayden recounts his admonition to his CIA successor, Leon Panetta.

I simply said: "Do not use the word 'torture' and 'CIA' in the same sentence ever again. You can object to some of the enhanced interrogation techniques. You can, in your heart of hearts, believe they meet some legal definition of torture. But Leon, you're taking over a workforce that did these things in good faith. They did these things with the assurance of the attorney general that they indeed were not torture. Do not accuse them of felonies."


By this logic, couldn't KGB or Gestapo torturers claim legal cover that they were just following orders from their legitimate Stalinist or Nazi governments? Maybe someone who spent his career embedded in the military and intelligence communities should have been more familiar with the first four Nuremberg Principles.

The Most Important Super Bowl Ad the NFL Refused to Allow

I missed the Super Bowl this year, but I did watch this public service advertisement from the National Congress of American Indians about the District of Columbia's NFL franchise, which is still bitterly clinging to its racist name and logo. This video deserves to be shared widely and watched even by those who missed this year's celebration of Chronic Traumatic Encephelopathy:

Separation of Church and State in Iowa 2016

"I want to thank an all powerful and mighty God for the chance that he has given us to be a part of this endeavor here in Iowa." Marco Rubio started with the God talk early in his triumphalist "victory" speech last night in Iowa (celebrating his third place showing behind Cruz and Trump). A little later, he made it clear that he was not talking about just some vague Judeo-Christian-Islamic-Deist lip-service God, he was referring to a very specific manifestation of the One True God: "I thank my Lord and Savior Jesus Christ, I thank God for allowing me the opportunity to come this far with each of you."

And Marco Rubio is supposedly not one of the chief Bible thumpers in this year's Republican field. The Southern Baptist Minister Mike Huckabee dropped out of the race after the caucuses last night, but the winner, Ted Cruz, while not ordained, is well known to be holier than thou, me, the rest of the Republican field, and the Pope. Cruz began his speech with the words used by most repeatedly-concussed NFL players whenever they see a microphone, "Let me first of all say, to God be the glory," but once he got that out of the way, I couldn't find the words "God" or "Jesus" again in the rush transcript of his speech. Of course the transcript cuts off when the Fox News cameras (the last network covering him) finally left him alone with his followers. He may still be up there speaking in tongues and quoting scripture.

The winner of the Republican speeches last night was, shockingly, Donald Trump, who was short, polite, congratulatory, and completely God-free.
Posted by True Blue Liberal at 2/02/2016 12:16:00 PM No comments:

With all the proud militarists running for President while holding the cross of Jesus before them, it sometimes gets hard to remember the Vietnam era, when many churches and religious people were in the forefront of the peace movement.

Here's a verse that was popular back then, and is the True Blue Liberal verse of the day for Iowa caucus day: 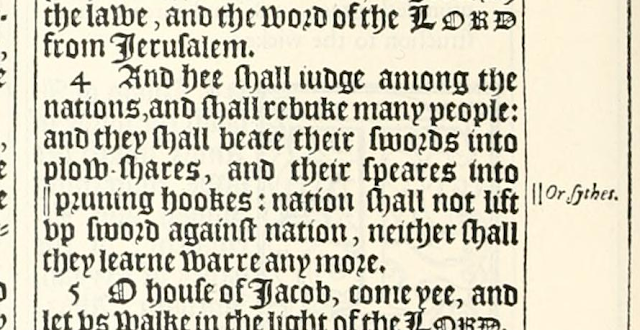 And hee shall iudge among the nations, and shall rebuke many people: and they shall beate their swords into plow-shares, and their speares into pruning hookes [Or Sythes.]: nation shall not lift vp sword against nation, neither shall they learne warre any more.  --Isaiah, Chapter 2, Verse 4


This is taken, of course, from the 1611 King James Version, known here at trueblueliberal.org as "The Real Bible For Real Christians."