John McCain will raise YOUR taxes

If you are lucky enough to have a job that pays for part or all of your health insurance, then your taxes will go up under John McCain's health plan (a.k.a., the private insurance company protection act of 2009).
Keeping it simple in today's Bob Herbert column in the Times, "McCain's Radical Agenda" :

" ... the McCain health plan would treat employer-paid health benefits as income that employees would have to pay taxes on.
“It means your employer is going to have to make an estimate on how much the employer is paying for health insurance on your behalf, and you are going to have to pay taxes on that money,” said Sherry Glied, an economist who chairs the Department of Health Policy and Management at Columbia University’s Mailman School of Public Health.
Ms. Glied is one of the four scholars who have just completed an independent joint study of the plan. Their findings are being published on the Web site of the policy journal, Health Affairs. "

"Why?" you might ask. The same blind and stubborn ideological faith in "markets" and morbid fear of "socialized" anything that has done so much economic damage over the last eight years leads him to believe that we'd be better off shopping for our own health insurance (as if dealing with the annual choice of four or five progressively less-attractive insurance plans at work is anything less than hellish as it is). But let's not cloud the issue by asking "Why?" Let's put it in the type of bullet points the electorate seems to understand.

Or maybe Sarah Palin is simply trying to protect that most important group of dyed-in-the-wool Republican voters, a.k.a. the Sheeple: 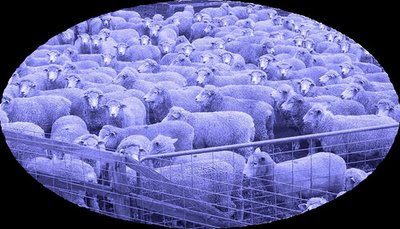 If the typical American voter were to read one article about the unknown governor from Alaska, I would recommend one that appeared in Salon today, "What's the Difference Between Palin and Muslim Fundamentalists? Lipstick: A theocrat is a theocrat, whether Muslim or Christian" by Juan Cole.

On censorship, the teaching of creationism in schools, reproductive rights, attributing government policy to God's will and climate change, Palin agrees with Hamas and Saudi Arabia rather than supporting tolerance and democratic precepts.

For another frightening religious angle today, here's a blog entry over at The Nation, "Sarah Palin and the Jews," by Jon Weiner, drawing parallels between Miss Congeniality Sarah and Queen Esther. Time to wipe out Persia again?

CNN is reporting poll results today showing that men are the backbone of Sarah Palin's support. At the risk of sounding sexist, I'm going to go way out on a limb here and say, Men are Fucking Idiots!
Posted by True Blue Liberal at 9/09/2008 01:58:00 PM No comments:

CLICK HERE to hear a "Pit Bull with Lipstick" in full-throated roar, but turn it down if you're at work!

God said unto them, Be fruitful, and multiply, and replenish the earth, and subdue it: and have dominion over the fish of the sea, and over the fowl of the air, and over every living thing that moveth upon the earth.
--Genesis 1:28

The Governor of Alaska, who this week has been anointed by God and God's Republican Servants to be John McCain's running mate and successor, has not only shown by her fruitful multiplication that she is a true servant of the one True American God, but also that she is an original thinker when it comes to expanding human dominion over the earth and its soulless creatures. Why stop with drilling under the habitat of endangered caribou and polar bears in the Arctic National Wildlife Refuge to fuel our pickup trucks and SUVs? Why not examine all the ways that we can add biofuels to the mix -- including those efficient biofuels in the abundant fat of the bodies of caribou, walruses, seals, whales, and polar bears of her home state? They're not doing anything productive, like posing for German zoo visitors or working to pull plows, and they're just going to die anyway when their ice melts and their tundra defrosts, so why shouldn't they share the burden of driving our families of seven to the mall?
If we had Siberia or India as a colony, we could also put a tiger in our tank, but until that inevitable day, we'll work with what we have.
Posted by True Blue Liberal at 9/04/2008 04:56:00 PM No comments:

Children Are Sacred. Quotes from our Presidential Contenders

“Let me be as clear as possible. I think people’s families are off-limits, and people’s children are especially off-limits. This shouldn’t be part of our politics. It has no relevance to Gov. Palin’s performance as governor or her potential performance as a vice president.”

“This is a very personal matter for the family. We should all respect the love they have for the child and the desire all parents would have for their children’s privacy. The media should respect Bristol’s privacy. That’s always been the tradition and practice when it comes to the children of candidates.”

"Why is Chelsea Clinton so ugly?
Because her father is Janet Reno."

David Corn's short article in Salon from June 25, 1998 about this "joke" is interesting in that it shows how ingrained the media bias in favor of John McCain has been for at least a decade.

"But the joke revealed more than a mean streak in a man who would be president. It also exposed how the Washington Post, New York Times and Los Angeles Times play favorites when reporting the foibles of our leading politicians."