No need to reset the countdown clock yet, or Bye Bye Miss American Idol!

Thanks to Republicans in the House of Representatives this afternoon, it seems that the death of broadcast TV in my fringy reception area is going to continue on schedule. The Senate passed a four-month delay earlier this week, but the House has refused to give fuzzy analog reception an extended life beyond February 17th.
Now I won't have to change the settings on my Death of Free TV Countdown Clock. And, barring an appeal to the Supreme Court by Howie Mandel and the cast of The View, those of us who are too cheap to subscribe to cable, and too far from New York's transmission towers to pick up the weaker digital signals, will finally be free of the boob tube's siren song in less than three weeks!!
Posted by True Blue Liberal at 1/28/2009 02:46:00 PM No comments:

So, What Is Funny Now That Dubya Has Skedaddled Back to the Wasteland?? 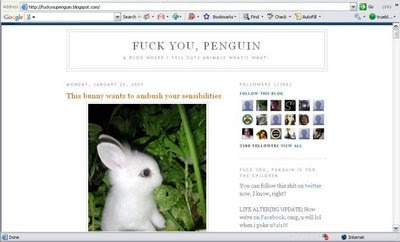 Now that both WhiteHouse.Org and Get Your War On have gone on hiatus, and the Bumbler in Chief has left us, what's left to laugh at every morning?

How about a blog where cute animals get told what's what?

The Desks Are Unoccupied Over at "Get Your War On"

Get Your War On, one of the earliest voices of reason starting right after September 11, 2001, and one of the first sites on the blogroll of this little blog, announced that its job came to an end on January 20, 2009.

What began in October of 2001 with two necktied cubicle dwellers cheerleading the beginning of the Global War on Terror®, is now ending with their desks empty (obviously laid off in the most recent of Bush recessions). 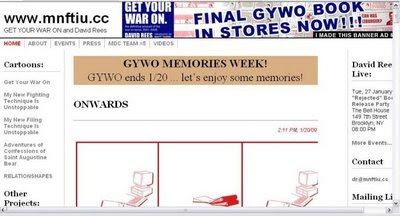 There were articles all over the place yesterday about the changes being made to WhiteHouse.GOV by the new Obama team that took over the White House and its electronic mirror on the world wide web, but I haven't seen any news regarding the fate of WhiteHouse.ORG (a.k.a., the "Officious Website of President George W. Bush") in this brave new world that we entered on Tuesday. 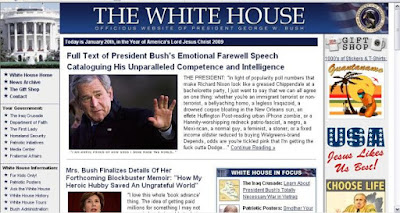 Where is the raison d'être of the website that brought us "TRANSCRIPT OF PRESIDENT'S INAUGURAL ADDRESS PROMISING GREATER FREEDOM® FOR FREEIFIED® FREEFOLK® TO FREELY® ENJOY FREETASTIC® FREEGASMS® OF FREEDOMOSITY®" and "COMPLETE TEXT OF PRESIDENT BUSH'S ORGASMIC REBEL YELL HERALDING THE LAUNCH OF OPERATION GODLESS IRAQAZOID SMACKDOWN "? Will it continue to exist as a time capsule for the reign of the President-who-shall-no-longer-be-named, or will it live on as a twisted reflection of the new White House occupant, no matter who that occupant should be?
It's a question that could be asked about all of us who started blogs and websites as responses to the Bushy Era. What the fuck do we do now?
~~~~~~~~~~~~~~~~~~~~~~~
UPDATE 26 January 2009: There is now a note online that the contents of WhiteHouse.Org have been permanently archived at WHITEHOUSE.GEORGEWBUSH.ORG.
Posted by True Blue Liberal at 1/22/2009 12:54:00 PM No comments:

the last thing I read on the train to work, courtesy of Roberto Bolaño

On page 226 of 2666, near the end of section 2, we get the quote of the day from Marco Antonio Guerra speaking to Amalfitano:

Reasons to be Grateful for the Death of Free TV: #1 -- Drug Ads

The current ubiquitous form of drug pushing directly to television viewers was illegal until 1997, and now we can't imagine watching the nightly news (on anything other than PBS) without an unending parade of blue, purple, yellow, pink and chartreuse pills about which we're supposed to ask our family physicians if we want to drive convertibles, ride mountain bikes, and walk through flowery meadows all day before having satisfying (VERY satisfying) sexual activity and a good night's sleep every single night. Now we're a nation of hypochondriacs, because drug advertisers (like all advertisers) know that their most effective sales weapon is fear. 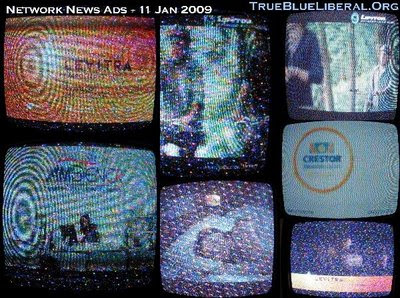 The ads are so ubiquitous now (the picture above was a random sampling from tonight during the national news half-hour on NBC and ABC), that it's probably hard for most Americans to believe that only two nations, New Zealand and the United States, have decriminalized this type of direct-to-consumer advertising of prescription drugs, and that the current form of advertising has only been permitted since very late in the last century.

These ads are only one reason that I'm looking forward to my analog screen going dead in just a little over a month.
Posted by True Blue Liberal at 1/11/2009 08:05:00 PM No comments:

Is the Death of Free TV Being Delayed?

This article in the Washington Post today is the first thing I've heard about a possible delay in the death of my rabbit-eared boob tube.

In a letter sent last night to President Bush , President-elect Barack Obama , House Commerce Committee Chairman Henry A. Waxman (D-Calif.) and Senate Commerce Committee Chairman John D. Rockefeller (D-W.Va.), the consumer advocacy group [Consumers Union] said Congress should push back the transition "until a plan is in place to minimize the number of consumers who will lose TV signals."

I've been counting on February 17th as the day that those of us in fringe areas (even with converter boxes) will experience the cliff effect and that final freedom from video mind control.
Was I just being optimistic?
~~~~~~~~~~~~~~~
update 9 January '09 at 8:30am:
This morning with the two recent FCC Chairmen, William Kennard and Michael Powell, writing a New York Times Op/Ed entitled "Don't Touch That Dial", it seems even clearer that I may need to reset the Death of Free TV Countdown Clock.

"...with 40 days to go, it is now clear that we are heading for a train wreck — unless Congress delays the transition for a few months to allow more time to prepare. "