Thomas Pynchon and Bob Dylan seem to be working in concert lately, and picking up speed, as they continue their creative careers. I couldn't help thinking that it seems like just yesterday that Pynchon's Against the Day and Dylan's "Modern Times" were released, and now here we are (or at least here I am) anxiously awaiting their new creations.

But their parallel paths go back much further than 2006, or even 1997. In every year that Thomas Pynchon published a novel, Bob Dylan has given us a new studio album!

The only year that seems a little off is 1973, where even two Dylan albums weren't enough to balance the scales. The cover versions on "Dylan" and the extended single of "Knockin' on Heaven's Door" that is "P.G. & B.t.K." are no match for the weight of Gravity's Rainbow (GR would have been balanced by "Blood on the Tracks" in a more perfect world), but all the other years seem to reach a sort of equilibrium. I'm surprised that I never noticed this coincidence between two of my favorite artists before, but I'm sure that someone else has.

Gone but Not Forgotten

What a great Bushism I found from our ex-President in Slate today, the first one since he helicoptered out of town on January 20:

"I'm going to put people in my place, so when the history of this administration is written at least there's an authoritarian voice saying exactly what happened."
—On what he hopes to accomplish with his memoir, as reported by the Associated Press, Calgary, Canada, March 17, 2009 [http://www.slate.com/id/2214256/]

If they let him write those presidential memoirs without a ghost, maybe I’ll have to read it just for the comic authorial (or is that authoritarian? or authoritative? or some conscious Joycean mélange of the three?) voice. It could be another Autumn of the Patriarch if his publisher has the genius to tell him, “Editor? You don’t need no friggin’ editor! It’s perfect just as it is Mr. President.”
Posted by True Blue Liberal at 3/20/2009 02:05:00 PM No comments: 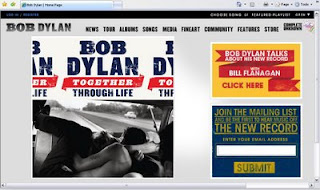 I'll be doing my bit for the economy in 2009, giving money to Penguin for a new book in August and to Columbia for a new record on April 28th. You can check BobDylan.com for details, read about it on RollingStone.com here, and read an interview by Bill Flanagan with Bob Dylan talking about "Together Through Life" by clicking here.

[...]Some people preferred my first period songs. Some, the second. Some, the Christian period. Some, the post Colombian. Some, the Pre-Raphaelite. Some people prefer my songs from the nineties. I see that my audience now doesn’t particular care what period the songs are from. They feel style and substance in a more visceral way and let it go at that. Images don’t hang anybody up. Like if there’s an astrologer with a criminal record in one of my songs it’s not going to make anybody wonder if the human race is doomed. Images are taken at face value and it kind of freed me up.

And if that's not clear, Bob explains his imagism better with the follow-up question:

In what way?
Well for instance, if there are shadows and flowers and swampy ledges in a composition, that’s what they are in their essence. There’s no mystification. That’s one way I can explain it.
Like a locomotive, a pair of boots, a kiss or the rain?
Right. All those things are what they are. Or pieces of what they are. It’s the way you move them around that makes it work.

2009 has already given us President Obama, and promises to give us a new studio album from Bob Dylan and a new novel from Thomas Pynchon. Quit your fucking whining America! These are the best years of our lives!
Posted by True Blue Liberal at 3/16/2009 04:24:00 PM No comments: 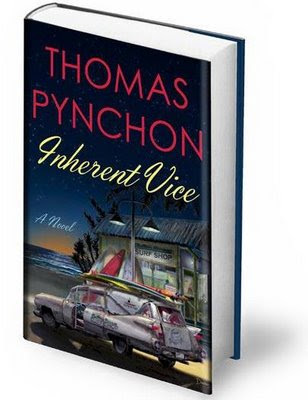 So, by this August your 13-inch rabbit-eared television will be dead, your total 401K retirement account balance will be less than your average monthly grocery bill, your house will be worth less than your 15-year-old Jetta, and the Chinese will have bought the brand names "Chevrolet" and "Cadillac" for 200 euros each, but on August 4, 2009 we will also be given the opportunity to shell out a mere $27.95 for a relatively short (416-page) new novel by Thomas Pynchon, Inherent Vice.
Here's the tag line from the Penguin catalog:

" Part noir, part psychedelic romp, all Thomas Pynchon—private eye Doc Sportello comes, occasionally, out of a marijuana haze to watch the end of an era as free love slips away and paranoia creeps in with the L.A. fog "

The first descriptions and excerpts in the catalog sound like a cross between Vineland and The Crying of Lot 49 with a dash of Raymond Chandler's style, but I'm sure that Tom will have some surprises in store for us that are brand new.
Posted by True Blue Liberal at 3/06/2009 04:25:00 PM No comments: