Evidence has been presented to show that Donald Trump is both a racist and a rapist, but which of those labels is more central to your image of the man?

POLL:
With #TrumpIsARacist trending this evening, it may be time for this question again.

When confronted with the incomplete phrase "TRUMP IS A RA_IST," are you more apt to fill the missing space with a "C" or a "P"?

Is "racist" or "rapist" more central to your image of Trump?

POLL: Which Trump Crime Family Member Will Be the First to See the Inside of a Jail Cell?

After today's historic front page of The New York Times on the Trump Crime Family's tax returns and financial crimes, it seems clear that somebody connected with the Trump Organization is going to be found guilty of a financial misdeed, but which member of the family will be the first one we see in a perp walk? 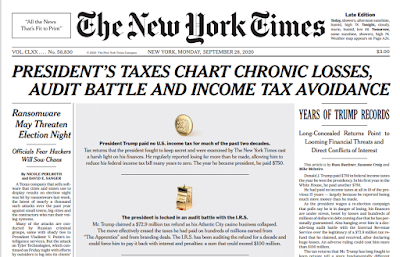 POLL:
Which member of the #TrumpCrimeFamily will be the first to see the inside of a jail cell for financial crimes?

As distressing as it is, we should prepare for the eventuality that the current occupants of the White House and the Naval Observatory might still be at their current D.C. addresses on January 21, 2021. If that happens, and they continue in their quest to transform the United States of America into the Bankrupt Republic of Gilead, what will replace the formerly-mighty U.S. Dollar as the world's favorite reserve currency.

POLL:
So, if Trump is re-elected, what will replace the American dollar as the world's most important currency?

And will we only find out the details years after this November's election?

One of the most shocking conversations I had in the days after the election of November 2016 took place over a lunch with two African-American co-workers, one male and one female, both in their forties. I spoke (ranted?) about my horror of the new White House resident planning to move in on January 20, 2017, and both of them told me that they had not voted, even though they were registered and had voted in 2008 and 2012. When I asked why, the short answer was that "Hillary Clinton would be just as bad as Trump" and "her emails" were somehow proof that she was just as dishonest as Trump. Neither one of them was a heavy consumer of television news or a reader of the New York Times (our local paper), but they were both watchers of popular entertainment (including the Apprentice shows) and active on social media. As more and more has come out about targeted Russian propaganda aimed at American Blacks through Facebook (as addressed in the following 2019 video from Senator Kamala Harris), I have to believe that some of their attitudes about Hillary came from that blizzard of lies, even though we were not living in one of the swing states that Trump's Campaign Manager Manafort had told the Russians to target.

With only 41 days until the election, what lies are currently being told to Black voters (and other key groups) about vice-presidential candidate @KamalaHarris in targeted social-media posts? What lies are being told about @JoeBiden to suppress voter turnout in 2020?

A quote worth remembering from the Notorious RBG

It's worth remembering this quote from the late Ruth Bader Ginsburg captured on my television screen on July 12, 2016.

"I can't imagine what the country would be with Donald Trump as our president." - Ruth Bader Ginsburg #NotoriousRBG pic.twitter.com/UfufNQCf06


She tempered these statements about the Republican nominee for President soon after they became public, but that didn't make them any less true. None of us -- in our worst prognostications -- could have imagined what the country would become with Donald Trump as our president.
Posted by True Blue Liberal at 9/18/2020 11:02:00 PM No comments:

Anyone who believes that Donald Trump is actually an expert on voting by mail, or voting in person, or voting at all, should watch this video of a very short-tempered Trump voting in person (or attempting to vote in person) at various locations on the Upper East Side of New York in November 2004 ... with a camera crew and Billy Bush (of Access Hollywood tape infamy) at his side. While he does finally vote (or at least fill out a provisional ballot) by the end of the video, this still doesn't inspire a lot of confidence about his knowledge and familiarity with the mechanics of the process that he is now questioning every day as we approach the 2020 election (just as he had prior to the 2016 election when he believed he was going to lose).

The frame of this video is interesting too. Billy Bush and his co-host Kit Hoover are in the Access Hollywood studio on election day of 2012 looking back at Donald's antics of 2004 and giving an update about Donald's current (2012) racist attempt to get Barack Obama to release his college transcripts and passport documents.

Poll: Should We Blame Exploding Trees or a Climate Arsonist for the West Coast Wildfires?

Are the current California (and Oregon and Washington) wildfires due to exploding trees and leaves?
Or are they being worsened by a climate arsonist in the White House?

POLL:
Which is a more likely root cause of the record-setting wildfires currently spreading across all the western United States? The #ClimateChange addressed in @JoeBiden's speech today or the #ExplodingTrees that you-know-who talked about?

Commas for Dummies (and Stable Geniuses)

Criticizing the grammar in the tweets of the current White House occupant seems like swinging at the lowest of low-hanging fruit, but there are Americans reading his misspealings and random CapitalizatIons and thinking they are normal. Many adults can laugh off his constant abuse of the language, but think of those who look toward him as "a very smart person," and think, God forbid, of the children who might be reading his tweets and repeating his grammatical examples in their school assignments.

Today the topic is commas because of two howling errors in recent tweets (and I'm making an effort to not look at all of his 280-character presidential pronouncements, so these are two found at random).

This morning came the "Just call me Kate" tweet:

Some things just don’t get any crazier. Just call me Kate, problem over! https://t.co/86SCqZ05ZG

And two days ago he tweeted about his son, Donald, [sic] and his "important new book":


The error in first tweet should be obvious. He is asking all of us to call him Kate. If he were asking someone named Kate to call him, he should have included a comma before her name to show that she is the one being addressed. But wouldn't it be wonderful if simply calling him Kate would solve all our problems?
The error in the second tweet is more interesting. The president might have to go back and study the rules about appositives, but by placing commas around "Donald," he is clearly suggesting that he only has one son. Is this actually an error, or is the stable grammatical genius subtly trying to tell us something about the paternity of Eric and Barron?

Your use of commas suggests that you have only one son.

Hire a copyeditor (unless this is your subtle way of telling us that Gary Busey really is Eric's father).