Here's another essential video from Hurricane Sandy. I'm sure that we'd be doing much better if we had Mitt Romney's privatized Federal Emergency Management Agency working on a profit motive starting the clean-up later this week, wouldn't we?


This performance from a (pre-Etch-a-Sketch) man who would be President took place at one of the early Clown Circus performances in New Hampshire on June 13, 2011. This asshole has been on our television sets for much too long. The American voters cannot be stupid enough to keep him in the public eye for four more years, can they?
Posted by True Blue Liberal at 10/29/2012 09:28:00 PM No comments:

Could the namers of hurricanes have picked a more appropriate name for a hurricane aimed directly at the boardwalks of New Jersey?

The One Hurricane Video You Must See...

I'm sitting at home with my office and mass transit closed in advance of Hurricane Sandy's arrival in the New York area later today. I haven't had any trees come down on my power or cable lines yet, so I have the opportunity to watch a lot of daytime television, with non-stop storm updates on WABC, WNBC, and WCBS. There are the predictable number of weatherpeople in suits predicting storm tracks in front of satellite maps and field reporters in raincoats standing on boardwalks in Long Beach, NY and Long Branch, NJ, but the number of mentions of the possible role of climate change in relation to these storms I've heard is the same as the number of mentions of climate change I heard during the Presidential debates: Zero.
Both sides need to be criticized for sacrificing the environment on the altar of low gas prices, but no one (especially those soon to be affected by record storm surges) should forget how one of the candidates milked sea level rise for laughs during his convention speech:

Worse than the words are the way that Mitt Romney waits for the laughs and jeers from his audience of well-heeled white "Job Creators" (one of whom may be the next crony looking for a cushy job running FEMA, or dismantling the EPA, in a Romney administration).

The Marketing Slogan of the Day

"When in Doubt Drink" was seen on the blackboard in front of Louise and Jerry's Tavern on Washington Street in Hoboken, 25 October 2012. 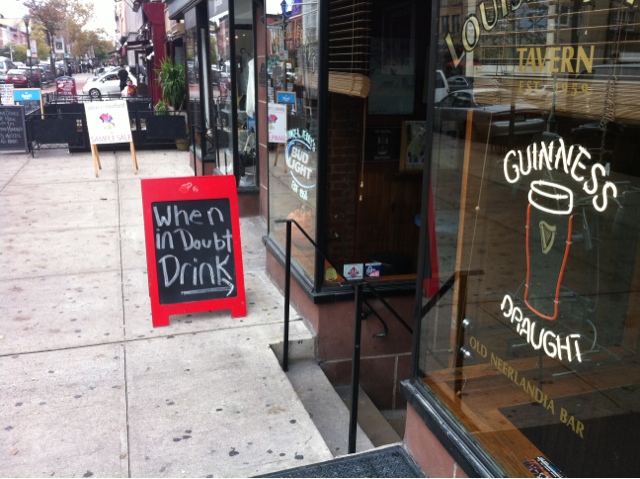 It's not just a joke.
Imagine how much more peaceful the world would be if the Middle East had more doubt. And more drinking.

~~~~~~~~~~~~~~
Update 11/16:  I took and posted this picture only four days before Hurricane Sandy, simply because the blackboard message struck me as funny.  None of us had any sense that New York harbor would see the storm surge it did and that no basement businesses or apartments in Hoboken would be dry when the Hudson River came to town and stayed for a few days..
Posted by True Blue Liberal at 10/25/2012 01:55:00 PM No comments:

Donald Trump's "major announcement" has been the subject of twittering speculation this week, and now he's announced his major announcement on YouTube and Facebook. If you can't stand his voice, the gist of the following video is basically this: If President Obama releases all of his college applications and records and passport applications and records by October 31, America's self-anointed Birtherist-in-Chief Donald J. Trump will donate $5 million dollars to a charity of the President's choice.


Of course this is as meaningless -- and as racist -- as the campaign for the "long-form birth certificate."

How much is Donald Trump offering to Willard "Mitt" Romney to release as many years of tax returns as Barack Obama has released? What if The Donald offers Willard one million for one year? He won't. And we won't even see 2009, let alone any tax returns from any of Mitt's years in the private sector. The press is playing dead and it's obvious that the richest man to ever run for the Presidency is going to give us the least financial information, even though his financial expertise is supposedly his main qualification for the office (Slogan: "Elect Me for My Business Experience, but My Business Experience Is None of Your Business."). Maybe Mitt's plan involves cheating America back to prosperity.

With the Debates Over, The Task Is Clear

"The administration brought a criminal action against the people drilling up there for oil, this massive new resource we have. And what was the cost? Twenty or 25 birds were killed, and they brought out a migratory bird act to go after them on a criminal basis."


Which bird(s) will Mitt Romney attack in Debate #3 next Monday?

It makes you wish that famous flock of crows in The Birds would make an appearance.

If You Were a Republican ...

... you might say to yourself about the following bald eagle photographed along the Potomac River last spring:

"If we were free of the repressive Endangered Species Act and the EPA Gestapo, I could use an American Assault Weapon rather than a Japanese Camera to capture that beauty forever, stuffed and mounted on my office wall to show how fucking patriotic I am!!"

... you look at this photograph I took yesterday and say:

"That would be even more beautiful if there were some fracking rigs installed there!"