Without a Mention in a Times Article, Did the WHIG Really Exist?

I hadn't written anything on the WHIGgate Update blog since 2009, but on this tenth anniversary of Bush'n'Cheney's Shock'n'Awe show over Baghdad, I had to go back there and repeat one of my routine searches to see if The New York Times -- the "Paper of Record" -- had yet made one reference in its news pages to the WHIG, the White House Iraq Group. 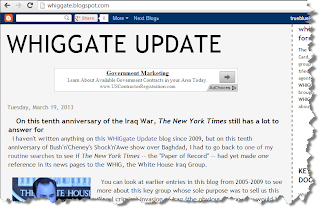 You can look at earlier entries on that blog from 2005-2009 to see more about this key group whose sole purpose was to sell us this illegal criminal invasion of Iraq (the obvious reason why would-be war criminals of BushCheneyCo rejected the authority of the International Criminal Court in 2002), but the Times still has NO news articles about this group whose existence has been widely reported in The Washington Post (though I'm having trouble today finding a live link to the key Barton Gellman and Walter Pincus article in the August 10, 2003 Post), by Bill Moyers, in The Huffington Post, The Daily News, and elsewhere, and publicly confirmed in print and video by key players like Scott McClellan.  But still, all the Times has to show when you search for existence of this group in its pages are a handful of Op/Ed pieces written (and written well) by Frank Rich.
This would all be just a strange omission in the journalistic record of this disastrous war if the Times' Judith Miller hadn't played a key role in spinning the WHIG's web of lies with her reporting about the aluminum tubes that were supposedly being used by Saddam Hussein to enrich uranium. Dick Cheney could then conveniently point to this reporting in "the liberal press" to help make his fictional case for war (with that glee about others' death and destruction which only the true chickenhawks among us can feel).
The Times at some point will need to come to terms with its own culpability in beating the war drums, but I'm no longer holding my breath.