Why Not Give the Winter Games to Qatar?

In its rush to become as disreputable as FIFA, that other grand international sports organization, the International Olympic Committee, has just awarded the Winter Olympic Games of 2022 to a city that has neither mountains nor snow, Beijing -- which will now become the first location to host both a Summer and a Winter Games.

Will Reporters Without Borders need to change the date and re-issue the following image as 2022 approaches, or will China be a freer nation by then?

The real issue is becoming the fact that no one in a free society right now wants to bid on these games. Boston just ended its 2024 Summer Games bid amid a popular uprising and people in Switzerland, Norway, Sweden, Germany, and Poland rejected 2022 bids, leaving Beijing and Kazakhstan as the only options for the IOC.

CLICK HERE if it's before 7pm EDT on July 29 to find a Bernie Sanders meeting near you tonight. 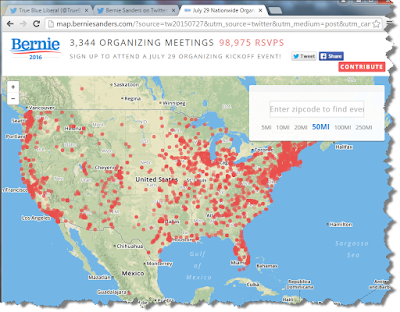 When I signed up for mine, I was participant 50 of 50 at that location and many of my other local meetings were already full. As of 10:10am EDT this morning there are already 98,975 RSVPs to these historic meetings around the country.

"I wouldn't just call the Hell's Angels in Oakland the only violent part of our society. I think Lyndon Johnson is, you know, would be a good Hell's Angel. The Angels reflect not only the lower segments of the society, but the higher and, you know, where violence takes a much more sophisticated and respectable form."
--Hunter S. Thompson, 1967

"This is the strangers’ case; and this your mountanish inhumanity." Shakespeare takes on the xenophobes among us.

On the drive home tonight, I had the pleasure of listening to Episode 621 of Marc Maron's WTF podcast, featuring Sir Ian McKellen. Listen to this fascinating conversation yourself, but I want to skip ahead to the little-known Shakespearean monologue with which Sir Ian ends the hour. Here it is again in video form from a few years ago:


Yes, everything that you or I or anyone else can think of has already been written by William Shakespeare; it's simply a fact with which we need to live (and for which we need to be thankful).

Here is a slightly longer version of the words that William Shakespeare put into Sir Thomas More's mouth in defense of an earlier generation of unwanted immigrants (text via PlayShakespeare.com)

MORE.
Grant them removed, and grant that this your noise
Hath chid down all the majesty of England;
Imagine that you see the wretched strangers,
Their babies at their backs and their poor luggage,
Plodding to the ports and coasts for transportation,
And that you sit as kings in your desires,
Authority quite silent by your brawl,
And you in ruff of your opinions clothed;
What had you got? I’ll tell you. You had taught
How insolence and strong hand should prevail,
How order should be quelled; and by this pattern
Not one of you should live an aged man,
For other ruffians, as their fancies wrought,
With self same hand, self reasons, and self right,
Would shark on you, and men like ravenous fishes
Would feed on one another.
DOLL.
Before God, that’s as true as the Gospel.
LINCOLN.
Nay, this is a sound fellow, I tell you. Let’s mark him.
MORE.
Let me set up before your thoughts, good friends,
On supposition; which if you will mark,
You shall perceive how horrible a shape
Your innovation bears. First, ’tis a sin
Which oft the apostle did forewarn us of,
Urging obedience to authority;
And ’twere no error, if I told you all,
You were in arms against your God himself.
ALL.
Marry, God forbid that!
MORE.
Nay, certainly you are;
For to the king God hath his office lent
Of dread, of justice, power and command,
Hath bid him rule, and willed you to obey;
And, to add ampler majesty to this,
He hath not only lent the king his figure,
His throne and sword, but given him his own name,
Calls him a god on earth. What do you, then,
Rising ’gainst him that God himself installs,
But rise against God? What do you to your souls
In doing this? O, desperate as you are,
Wash your foul minds with tears, and those same hands,
That you like rebels lift against the peace,
Lift up for peace, and your unreverent knees,
Make them your feet to kneel to be forgiven!
Tell me but this. What rebel captain,
As mutinies are incident, by his name
Can still the rout? Who will obey a traitor?
Or how can well that proclamation sound,
When there is no addition but a rebel
To qualify a rebel? You’ll put down strangers,
Kill them, cut their throats, possess their houses,
And lead the majesty of law in line,
To slip him like a hound. Say now the king
(As he is clement, if th’ offender mourn)
Should so much come to short of your great trespass
As but to banish you, whether would you go?
What country, by the nature of your error,
Should give you harbor? Go you to France or Flanders,
To any German province, to Spain or Portugal,
Nay, any where that not adheres to England,—
Why, you must needs be strangers. Would you be pleased
To find a nation of such barbarous temper,
That, breaking out in hideous violence,
Would not afford you an abode on earth,
Whet their detested knives against your throats,
Spurn you like dogs, and like as if that God
Owed not nor made not you, nor that the claimants
Were not all appropriate to your comforts,
But chartered unto them, what would you think
To be thus used? This is the strangers’ case;
And this your mountanish inhumanity.
ALL.
Faith, ’a says true. Let’s do as we may be done to.


Have we really fallen from those words to those of Donald Trump and Ann Coulter in only a little over 400 years?

I heart NASA's "I Heart Pluto" Twitter page for this #PlutoFlyby day:

Why isn't Eugene V. Debs a universally-known hero in our American classrooms?

Why doesn't every American student know that our government sentenced Debs to TEN YEARS in prison for delivering this bit of wisdom about war and peace and class struggle in Canton, Ohio in 1918, and that his sentence was upheld by a unanimous Supreme Court?

Here's the short speech being read by Mark Ruffalo to an audience thinking about the Iraq War in 2007:


And here's an excerpt in print of the section beginning at the 1'30" mark of the video:


"Wars throughout history have been waged for conquest and plunder. In the Middle Ages when the feudal lords ... concluded to enlarge their domains, to increase their power, their prestige and their wealth they declared war upon one another. But they themselves did not go to war any more than the modern feudal lords, the barons of Wall Street go to war. The feudal barons of the Middle Ages, the economic predecessors of the capitalists of our day, declared all wars. And their miserable serfs fought all the battles. The poor, ignorant serfs had been taught to revere their masters; to believe that when their masters declared war upon one another, it was their patriotic duty to fall upon one another and to cut one another’s throats for the profit and glory of the lords and barons who held them in contempt. And what is war in a nutshell? The master class has always declared the wars; the subject class has always fought the battles. The master class has had all to gain and nothing to lose, while the subject class has had nothing to gain and all to lose—especially their lives. They have always taught and trained you to believe it to be your patriotic duty to go to war and to have yourselves slaughtered at their command. But in all the history of the world you, the people, have never had a voice in declaring war, and strange as it certainly appears, no war by any nation in any age has ever been declared by the people. ... The working class who fight all the battles, the working class who make the supreme sacrifices, the working class who freely shed their blood and furnish their corpses, have never yet had a voice in either declaring war or making peace. It is the ruling class that invariably does both. They alone declare war and they alone make peace. Yours not to reason why; yours but to do and die. That is their motto and we object on the part of the awakening workers of this nation. If war is right let it be declared by the people."

Happy Psychedelic Fourth of July from the US Information Agency (1975)

The TBL Sidebar Poll Is Showing a Trend

I expected that the supporters of Bernie Sanders might make a good showing when I put up my first 2016 Presidential Poll in the sidebar, but I wasn't expecting him to open up a quick 80% gap over Hillary Clinton. 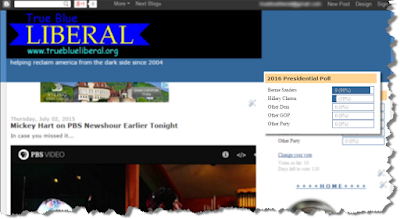 Does anyone see any excitement for the "inevitable" establishment candidate for the 2016 Democratic nomination?

(NOTE: If you're looking at trueblueliberal.org on a mobile device, you'll need to scroll down and click on "View Web Version" if you want to see and vote in the sidebar poll.)

In case you missed it...