POLL: The "Death Tax" or Deaths In Texas

Yesterday afternoon, while victims of Hurricane Harvey were still dying and being rescued by helicopters and boats in Texas, President Trump spoke in Missouri about the more pressing issue (for him) of tax reform. 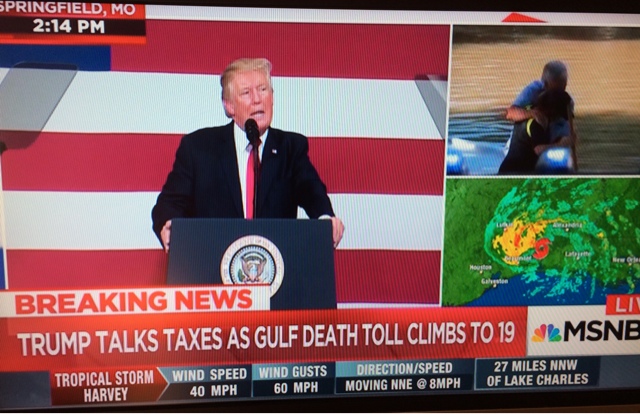 POLL:
Which issue is closer to @realDonaldTrump's heart, repealing Estate Tax to help his kids or empathizing with Hurricane Harvey victims?

Will Donald Trump's first pardon go to the racist sheriff from Arizona? Or one of the people connected to the Trump/Russia scandal?  Or maybe he'll just try to save his namesake from RICO charges connected to "normal business practices"?


Which of these four will be the first to receive a @realDonaldTrump pardon?
— True Blue Liberal (@TrueBlueLiberal) August 24, 2017

Twitter polls only allow four names, so if you have a name other than Arpaio, Manafort, Flynn, or Junior in mind, please put it in the comments.

No, America's worst painting is not from "The Painter of Light™," but from Sean Hannity's favorite painter, Jon McNaughton.

It's turning out to be right-wing art history week. A few days ago we heard commentary on statues from the Tweeter-in-Chief. Today Fox News' Dumbest Anchor® tweeted the video above with the comment "Amazing video and Art! Love this." As an investor and collector of McNaughton's work, he's only coincidentally trying to increase the value of his own collection, but as an art expert I'd also like to ask Sean if the black snake being crushed under Donald Trump's heel represents who we think it represents (Hint: not Satan). If there's any doubt that the black snake is Barack Obama, all one has to do is to look at the artist's earlier "Forgotten Man" masterpiece in which President Obama is standing in the same spot with the Constitution under his foot while getting dirty looks from all the earlier white presidents as the forgotten man hangs his head sitting on his bench. Now, in the glorious Trump years, the forgotten one is off his bench and planting a tree of hope, and Barack Obama is being trampled underfoot.

Heavy-handed symbolism in representative art is always ugly, but heavy-handed racist symbolism gives this waste of canvas the prize for America's Worst Painting.
Posted by True Blue Liberal at 8/22/2017 11:29:00 PM No comments:

Last night Donald Trump tortured the ears and patience of America's prime-time television audience as he struggled to fluently read a script about Afghanistan from a Teleprompter at Fort Myer in Arlington, Virginia. Tonight he'll be appearing and throwing red meat to his red-capped faithful at a campaign rally in Phoenix, Arizona. This raises an obvious question without (for me) an obvious answer about the two Donalds.

Which Trump annoys you more, the one who struggles to read from Teleprompters, or the rabble-rouser spewing his inchoate anger at rallies?
— True Blue Liberal (@TrueBlueLiberal) August 22, 2017

Defender-of-Nazis Donald J. Trump took to Twitter this morning to defend Confederate statues again, typing a string of tweets with an unexpected and completely out-of-character lesson in art history and the appreciation of beauty.
The first time that Donald Trump's name was linked to beautiful statuary in the news was back on June 6, 1980 when an article about Bonwit Teller on the first page of The New York Times ran with the headline, "Developer Scraps Bonwit Sculptures." Trump's name itself didn't appear until the sixth paragraph about the landmark Fifth Avenue department store that was being razed to make room for a "$100 million 62-story bronze-colored glass tower of apartments, offices, and stores" that we now know by its shorthand name, Trump Tower. Trump had promised the Metropolitan Museum of Art that he would donate two 15-foot-tall Art Deco bas-relief panels by Rene Paul Chambellan if the cost of removing them was not "prohibitive." In the next paragraph, Trump's fictional "vice president of the Trump Organization John Baron" explained, in a voice that sounded very much like Donald Trump's, "the merit of these stones was not great enough to justify the effort to save them." Even though the Met was anxious to add these pieces to their collection and the appraiser consulted by the Times valued them at "several hundred thousand dollars," the unnamed three independent appraisers that "John Baron" cited had valued them at "worth less than $9,000 in resale value" and not worth his estimated $32,000 cost of removal. So the Trump Organization removed the sculptures with jackhammers instead. The Met was interested in acquiring the decorative metal grillwork above the main entrance as well; Trump sold it for its scrap value.