Here's a quick piece of friendly video advice from Mr. Lippman of Pendant Publishing to the Twitter personality known as @realDonaldTrump...

Phil Ochs would have been turning 75 today...

If any of the more warmongery participants in the last Republican debate becomes President, this 1965 Phil Ochs song from the Vietnam era could become a hit once again.

Until today, this is what I thought about when I heard the name "San Bernardino"

From Frank Zappa and the Mothers' 1975 One Size Fits All album, this live version 'San Ber'dino' is from London in 1978:

It Can Happen Here


I've been leafing through the 1940 flea-market reprint of Sinclair Lewis's It Can't Happen Here that I read during the Nixon years. I'm not re-reading the brittle pages of whole novel again now--80 years after its first publication in 1935 and more than 40 since I read it--but I couldn't help noticing some lines that seemed especially relevant right near the beginning, now that we have Donald Trump portraying a cartoon version of Lewis's Buzz Windrip:

"...Wait till Buzz takes charge of us. A real Fascist dictatorship!"
"Nonsense! Nonsense!" snorted Tasbrough. "That couldn't happen here in America, not possibly! We're a country of freemen." 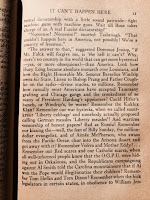 "The answer to that," suggested Doremus Jessup, "if Mr. Falck will forgive me, is 'the hell it can't!' Why, there's no country in the world that can get more hysterical--yes, or more obsequious!--than America. Look how Huey Long became absolute monarch over Louisiana, and how the Right Honorable Mr. Senator Berzelius Windrip owns his state. Listen to Bishop Prang and Father Coughlin on the radio--divine oracles, to millions. Remember how casually most Americans have accepted Tammany grafting and Chicago gangs and the crookedness of so many of President Harding's appointees? Could Hitler's bunch, or Windrip's, be worse? Remember the Kuklux Klan? Remember our war hysteria, when we called sauerkraut 'Liberty cabbage' and someone actually proposed calling German measles 'Liberty measles'? And wartime censorship of honest papers? Bad as Russia! Remember our kissing the--well, the feet of Billy Sunday, the million-dollar evangelist, and of Aimée McPherson, who swam from the Pacific Ocean clear into the Arizona desert and got away with it? Remember Voliva and Mother Eddy?...Remember our Red scares and our Catholic scares, when all well-informed people knew the O.G.P.U. were hiding out in Oskaloosa, and the Republicans campaigning against Al Smith told the Carolina mountaineers that if Al won the Pope would illegitimatize their children? Remember Tom Heflin and Tom Dixon? Remember when the hick legislators in certain states, in obedience to William Jennings Bryan, who learned his biology from his pious old grandma, set up shop as scientific experts and made the whole world laugh itself sick by forbidding the teaching of evolution?...Remember the Kentucky night-riders? Remember how trainloads of people have gone to enjoy lynchings? Not happen here? Prohibition--shooting down people just because they might be transporting liquor--no, that couldn't happen in America! Why, where in all history has there ever been a people so ripe for a dictatorship as ours! We're ready to start on a Children's Crusade--only of adults--right now, and the Right Reverend Abbots Windrip and Prang are all ready to lead it!"...
[pages 21-22, Triangle Books 1940 reprint edition]
Posted by True Blue Liberal at 12/01/2015 09:16:00 PM No comments: