The "R" on my car does not stand for "Republican" 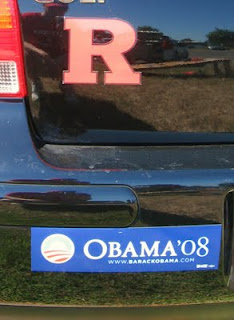 Police in my town famously stopped Bob Dylan on the street a month ago because Bob was wandering around like the suspicious old man he is (we didn't know about his detention at the time, but we saw his outdoor concert in the rain later that night in Lakewood and he and the band did a great job), but today I heard that the police allowed Republicans -- right here in Long Branch, openly, allowed to walk, chant, and hold ridiculous signs -- to freely assemble on the street in front of Congressman Frank Pallone's office, demonstrating to maintain the wonderful status quo in American health care. And really, it is a wonderful system. What other healthcare system in the world employs millions in unnecessary jobs filling out insurance paperwork, or collecting big bonuses for denying lifesaving treatments? What other healthcare system in the world forces the rest of us to hold like grim death onto jobs that we hate in order to keep private health insurance that may or may not cover us when we really need it? Things are perfect just as they are. Or at least that's what the Repulicans who invaded Long Branch today from their strongholds in Middletown and Rumson think.
I wouldn't even have mentioned them except for the fact that I went to the library today, just a few blocks down Broadway from their demonstration, and when I came out I noticed that the OBAMA'08 bumper sticker that had been on my car since late 2007 was missing. I can't swear that it was one of them, but the sticker was definitely there just a couple of days ago. When I get my liberal self appointed to one of Obama's Death Panels, I'll be looking for the sticker thief so I can personally pull his or her plug or administer the lethal injection (the final preferred Obama Death Panel Execution Method [or ODPEM] has yet to be determined by soulless atheistic socialist government bureaucrats).
Posted by True Blue Liberal at 8/22/2009 03:51:00 PM 2 comments: