Who knew that Sarah Palin was one of us? 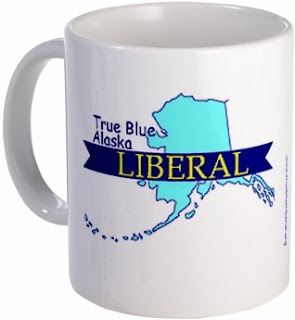 Should we send her a True Blue Alaska Liberal mug and button, or lift a toast of commie vodka in her honor now that a blogger for a New Jersey newspaper that hasn't totally gone out of business yet has written a piece titled "Sarah Palin: Just another whiny liberal claiming victimization"?
Of course this writer, this Paul Mulshine fella -- "the sole genuinely conservative columnist on any major American newspaper" in his own words -- doesn't seem to admit that most of the whining and whinging (I love the Brit version, which seems more onomatopoeically correct) has been pouring from people on the right claiming victimization by godless public schools, the IRS, non-whites & have-nots, ObamaPelosi&Reid, the mean liberals who call the teabaggers on their racism, and the gays & lesbians who are attacking their holy unhappy marriages (and the Newark Star Ledger is a "major American newspaper"?).
The fine White Whine of victimization has become the background noise of our culture, but it's so much easier to take one of Sarah Palin's most common and unattractive features and attribute it -- without any evidence of any liberal feelings or thoughts on her part -- to her "liberalism". And, as we know from Glen Beck, Liberal = Communism = Fascism = Nazism. The conservatives have learned that their second greatest weapon (after an unrelenting appeal to irrational fears of those feeling victimized) is to treat words as if they have no meaning grounded in facts or history. After the success of the Swift Boat lies about John Kerry and the WMD lies of the Bush Regime, they've obviously come to the conclusion that the most effective way to win any argument is to simply destroy the meaning of our common language.
Posted by True Blue Liberal at 3/10/2010 08:52:00 PM 1 comment: