Donald Trump Finally Interviewed by Someone With Real Questions

As an interviewer, Sarah Palin may have set a new standard for the definition of softball sycophantic questions in this broadcast on something called "One America News" last night:

Is she looking for a spot as Secretary of State in the Trump Administration?

If you have been unlucky enough to have watched American television over the last two weeks, it will have become immediately obvious that only one of the 22 major-party candidates is deserving of any air time:

Here is "The Old Way and The New." This 1912 film is the first known use of moving pictures in a political campaign. It promotes the new way of using small $1 campaign donors behind Democrat Woodrow Wilson against the old way of cartoonish oligarchs' $1,000,000 donations supporting Republican William Howard Taft and ex-Republican Teddy Roosevelt (Bullmoose).


No need to adjust your sound. This is a silent film.

I Just Stumbled On The Whitest Corner Of The Internet.

Jimmy Carter's cancer news this week got me thinking about his stellar post-Presidential life of service, which led me to muse about some of the less admirable roles played by recent ex-Presidential candidates (especially from the Republican Party). I knew that Mitt Romney's wealth had insulated him from the financial need host a Fox News show or sell boner pills or reverse mortgages, but I didn't know much about the Solamere Capital group he had formed with his son Tagg, so I visited and found the following three-page white on white on white website.

That's it. That, except for a disclaimer, is the entire website.

The GOP Alternative to the International Iran Deal

The Republicans have had an alternative to the complicated nuclear deal agreed to by the US, UK, Iran, France, China, Russia, and Germany all along.

It has never changed.

John McCain even made their simplistic strategy the semi-official 21st-century theme song of the Grand Old Party when he sang "Bomb Bomb Bomb, Bomb Bomb Iran" at a South Carolina campaign appearance on April 17, 2007.

How Much of the Constitution Are GOP Candidates Willing to Change?

Thanks to Common Cause for pointing out on Twitter earlier this morning that today is the 95th anniversary of the 19th Amendment.

When I saw that celebration of the 19th, I couldn't help thinking about the current universal rage against the 14th Amendment being expressed by Republican presidential candidates and the right-wing media.


After the GOP is done repealing the 14th Amendment, will they combat their gender-gap problem by repealing the 19th? https://t.co/ikcF8couyb
— True Blue Liberal (@TrueBlueLiberal) August 18, 2015


It makes you wonder at what point the GOP will stop thinking it's OK to mess with the Constitution (if nothing else we know they'll stop before touching the Holy And Sacred God-Given Second Amendment).

On this 80th anniversary of Social Security today, let's not forget which party has never given up on destroying this cornerstone of American socialism.

Here's the official plank from the final 2014 platform of the Texas Republican Party.

The Republican plans to replace Social Security with a privatized system didn't end with their last President's failure to do so as his highest domestic priority in 2005. Ending this successful social program of FDR's will remain one of their highest priorities if they regain the White House.

The entity tweeting as @realDonaldTrump has been promoting its online store today, so I paid it a visit.
It immediately became clear that the entire "Presidential campaign" is just a scheme to sell the thousands of overstocked cheerleading and tailgating supplies left over after the demise of Trump University.

Oligarchy By The Numbers

With billionaires trying to buy candidates and control election results in both major US political parties with the legal support of a pro-business Supreme Court, the word "oligarchy" is getting thrown around again as we approach the 2016 election. So I found these sentences relevant when I ran across them in my morning reading...

"So the long period in which towns prospered, in the twelfth and thirteenth centuries, was also one in which the sense of urban community was most highly developed. In some respects the notion of a community is specious, however, since the richer townspeople known as 'the better sort' created an oligarchy of power concentrated in a small network of families. In Norwich 60 per cent of the wealth had devolved into the hands of 6 per cent of the population..." --Peter Ackroyd, Foundation: The History of England from Its Earliest Beginnings to the Tudors ["page" 139 of the Kindle edition]


Yeah, you say, but that was the 1100's and 1200's. That was medieval England. Everyone knows that medieval societies were based on hierarchies of extreme inequality, not like today when the top 1% are expected to control more than half of the world's wealth by 2016 and when the top 0.1% of Americans control as much wealth as the bottom 90% and all of these numbers are trending quickly toward even greater inequality.

From the mouths of babes...

South Park explains in 56 seconds why Cecil-the-Lion's murderer and other big game hunters are more likely to support (and to be) Republicans than Democrats.

The First GOP Debate, Brought To You First On TrueBlueLiberal.Org

I just finished watching some of the Voters First Presidential Forum on C-Span right now and it makes me glad that I no longer pay my cable company enough money to get the package that includes the Fox News Network. That gives me a great excuse not to watch the first "real" debate later this week; I'm left free to simply imagine the garish red, white, and blue flag graphics behind the row of red white, and blue podia, behind which will be standing ten men, all of whom will be dressed in dark blue suits, white shirts, and an assortment of red, blue, and TrumpGold® ties.

After the preliminary prayers, Pledge of Allegiance, singing of 'God Bless the USA,' 'God Bless America,' and the Star-Spangled Banner, there will be short introductions of the candidates and then the questioning will begin without opening statements so that all ten candidates will have the chance to respond to at least one question in the remaining thirty minutes of airtime. 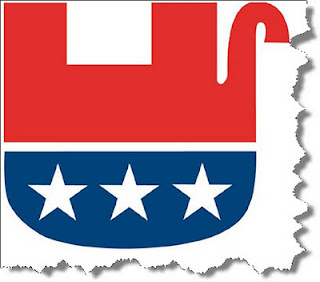 Blond Female Fox Questioner: Gentleman, we'd like to begin with a few questions to establish the areas of broad agreement between you -- and in opposition to your Democrat opponents -- before we move on to the minor details of management style and policy nuance that may separate you. So first, by a show of hands, how many of you are committed to reducing the onerous tax burden on patriotic job-creating Americans like the Koch Brothers and Sheldon Adelson and ...

Candidate Trump: ...and me myself, the winningest and classiest multi-billionaire job-creator-like guy.

BFFQ: Gentlemen Gentlemen. We know this is an issue near and dear to all your hearts, but you'll all get a chance to speak shortly. Now by a silent show of hands, how many of you are now willing to publicly commit to lowering the job-killing tax rates currently imposed on America's job-creating heroes?

[The camera will pan slowly across the stage to show each candidate with his hand raised. Governor Perry will have both hands up until he realizes that his nine companions are only raising their right arms; he'll lower his left hand and his microphone will pick up a soft "ooops."]

Male Fox Questioner with Brown Hair Combed in a 1930's Style: In another area that we feel may elicit broad agreement, please raise your right hand if you pledge to declare war on Iran as one of your first acts as President.

Candidate Paul: Everyone will know on Day One that Rand Paul is not a peacenik like his Dad!

[The other eight candidates will also raise their hands enthusiastically, but silently.]

MFQwBHCia1930S: Thanks to most of you for following the instructions. For answering twice out of order, Candidate Walker has lost his chance at a closing statement.

Candidate Walker: What the fudge?

MFQwBHCia1930S: All the Candidates were given a copy of the rules, which featured the three-strikes rule, so give Candidate Walker the hook and hand his podium to Alternate Candidate number .... [MFQwBH will pull a ball from a velvet bag and read the number on it] ...three. Alternate three, Governor Jindal, come on up!

[The camera will follow Scott Walker raising two fingers on each hand into nixonesque V's and waving them to the crowd as he leaves stage left. In a split-screen image, we will simultaneously witness a goofily-grinning Bobby Jindal enter from the stage-right wings.]

MFQwBH..: Candidate Jindal, do you agree to cut billionaires' taxes and bomb Tehran?

Candidate Jindal: Of course. Of course I do.

BFFQ: For our final group question, please raise your hand if you're demonstrating your opposition to so-called "Gun-Free Zones" and adherence to the Second Amendment by carrying a concealed firearm and a copy of the Constitution tonight.

[Eight of ten candidates will immediately raise their hands.]

Candidate Christie: A few of us [he will nod to Candidate Trump] have goons to carry our guns for us.

[Candidate Perry's raised hand will actually be holding a cute little pearl-handled Colt revolver, which he will accidentally discharge into some key electronic components in the ceiling. "Ooops" will be the last word heard as the screens across America go blank.]