And How Many of His Houses and Condos Get Their TV Reception Over the Air?

I was reminded of the upcoming Digital TV Conversion fiasco (a.k.a, The Death of Free Television), when I stumbled upon this "Goodbye Rabbit Ears" column in the Times, and a link in its comments section to the DTVRedAlert.org blog, which is dedicating itself to questions about this transition during which cable companies and electronics manufacturers are planning to make a fortune.
It all just seems to fit so nicely with the (unanswerable) question about how many dwellings that John & Cindy McCain own (we can assume that none of them lack cable).
When John was pushing this Death of Free TV bill back in 2004, could he possibly empathize with a person getting his or her fuzzy moving pictures of the news and sports and game shows through the air with rabbit ears? Or was all his empathy spent on those with whom he shared private jets?
Posted by True Blue Liberal at 8/25/2008 05:28:00 PM No comments:

How Many Homes Do YOU Own? (Be Sure to Vote in the New Sidebar Poll)

Everyone that I know would answer the question with the numbers Zero, One, or Two (and those with two are rarities). Before last week, could you even conceive of anyone answering that straightforward question with John McCain's answer?

In addition to the absurdity of not knowing how many homes you own, you have to love the Bushian lack of sentence structure (though Dubya prob'bly woulda called those uncountable condos "condoms" and everyone woulda gotten a big chuckle out of it).
Posted by True Blue Liberal at 8/25/2008 12:47:00 PM No comments:

[I know this seems out of order between Parts One and Three, but this Part Two of my Joe Biden For Vice President campaign was originally posted on May 27th. It wasn't there when I wanted to look at it today after getting my text message from Barack. This afternoon (August 23) Barack and Joe will be making their first joint appearance as running mates!] 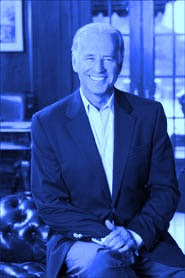 Bob Herbert has a great column in today's New York Times, "Roads, High and Low," which begins with these words:

No, Joe Biden wasn't again pointing out the "bullshit" and "marlarkey" underlying the President's latest utterance (at least not in those exact terms), but he was continuing to stay on the attack against the Bush/McCain foreign policy: "The idea that they are competent to continue to conduct our foreign policy, to make us more secure and make Israel secure, is preposterous. ... Every single thing they’ve touched has been a near-disaster." These statements, coming from the Democratic Senator with the most universally-recognized foreign policy credentials will carry even more weight if he is on the ticket in the fall. Picking the Chairman of the Senate Foreign Relations Committee for his ticket will also reinforce Barack Obama's "Team of Rivals" theme of picking the best and picking (where appropriate) his adversaries for the nomination (John Edwards for Attorney General, anyone?). Picking Biden will also address the "experience" question at least as well as Richard "Dick" Cheney's selection answered the question about young Doubleyou's lack of "gravitas" in 2000. Biden not only has 28 years more service in the Senate than the Junior Senator from New York who is constantly of speaking of her experience, but he has 14 more years in the Senate than the presumptive Republican nominee (even though Joe Biden is 6 years younger than McCain, and only 5 years older than Clinton).

Biden may not be the best choice for all the crass ticket-balancing political reasons that have given us such great nominees as Dan Quayle and Joe Lieberman in recent years, but he's definitely worth some serious consideration (and, for what it's worth, he's my front runner).