Happy Halloween from Delaware's Republican Candidate for US Senator

You would think that with the Republicans' reliance on FEAR as their main electoral aid, that October 31 would be their second favorite holiday of the year (after September 11).
Posted by True Blue Liberal at 10/31/2010 10:04:00 PM No comments:

As the owner of a couple of Gibson guitars (which take up more of my limited leisure time than this blog or tweeting or any other recreational computing), I was tempted to skip a couple hours of work and run over to see an event at New York's Hard Rock Cafe yesterday that had been billed in emails from Gibson in dramatic terms "Gibson invites you to witness a revolution. Henry Juszkiewicz, Chairman and CEO of Gibson Guitar Corp, will address members of the press, artists and fans, with an announcement that will change music forever. This is more than a press conference. More than an event. This is an uprising!" I didn't go, and I'm glad.
Henry Juszkiewicz and the teabaggers are devaluing the word "revolution" in twenty ten, because Gibson's attempt to "change music forever" was the Firebird X seen in this video from yesterday's event.

It looks and sounds gimmicky and (not to offend the demonstrator, who obviously knows his way around a fretboard) the size of the guitarist makes the Firebird look like it's the size of a Guitar Hero controller. How many of these electronics will be outdated in 5 years? Or worn out and unfixable in 10? A Gibson guitar with a MSRP of more than five grand should be around for at least 40 or 50 years, as the next video shows.
This is a Firebird III from 1963, showing why True Blue Liberal will be wearing white rather than red in this particular "revolution". Here's what a guitar should sound like.

What Not to Wear to a Rand Paul Rally 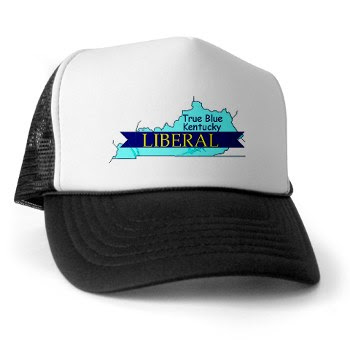 When following a link to this video of Rand Paul supporters assaulting an anti-Paul protestor, I got the following message page from YouTube. 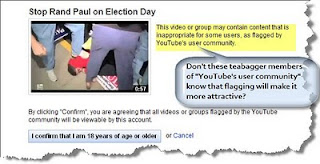 There's no sex or profanity (though the actions of these thugs against Lauren Valle are obscene, and should be out of place in any democratic society), so I assume that the members of the YouTube user community who have flagged the following video have done so purely for political purposes.


If you didn't receive it in your email this morning as a card-carrying member of the Michael Moore Brigade, then you might also be interested in reading "A Boot to the Head ... from Michael Moore" on his website in which he places these brownshirt street tactics in a wider perspective. We're all going to get kicked, figuratively if not literally (though literally is always a possibility), if we let the pre-election pollsters be proved right next Tuesday night.
Posted by True Blue Liberal at 10/29/2010 08:34:00 AM No comments:

I'M MAD AS HELL TOO, CARL!, or Go Frack Yourself

There's now less than a week left of these ugly emphatic orange and black signs along the side of New York's backroads, impeding the deer and wild turkeys in their quest to run into my car. Soon we'll be back to nothing but piles of leaves and bare trees on the roadsides. I don't seem to be mad about any of the things that Carl and Fox News want me to be mad about, but I am mad that one of Carl Paladino's first acts, if elected Governor of New York, would be to immediately allow hydrofracking here in upstate New York. Who cares if our previously pristine well water becomes poisonous ... and flammable?

The "Macaca Moments" of Twenty Ten

I spent years without TV (commented on in numerous previous posts), but now that I have cable again, I'm glad to have access to Rachel Maddow's common sense. In a perfect world, every American voter would watch this segment -- "Decision 1964" -- with which she opened her show tonight.
Posted by True Blue Liberal at 10/19/2010 11:25:00 PM No comments:

It's too bad they didn't let Banksy direct an entire episode.

I haven't seen a full episode of The Simpsons® in years, but now that I have a TV again, maybe I'll give it a try, especially after seeing the news about this Banksy opener that played on last night's episode.