On its website, the Van Gogh Museum describes Vincent's 'Head of a Skeleton with a Burning Cigarette' from 1886 as 'a juvenile joke.' Maybe it's because I was a juvenile 19-year-old visiting Amsterdam when I was first exposed to (and surprised by) the original painting by an artist I knew for sunflowers, starry nights, and self portraits, but it's always been one of my favorites ever since. Revisiting it today on the virtual walls of the internet after many years, it struck me that it could be yet another in Van Gogh's long series of self portraits.

The Semifinals of The Untruthful Trump Tournament Have Been Set!

I could probably use the term F*nal F*ur if I wouldn't be in danger of being sued by the large corporation that makes billions off the actions of unpaid college athletes at this time of the year, so I'll just call this the semifinals of the tournament to identify Donald Trump's worst lie.

In match one, his lie that Presient Obama wasn't born in the US got 81% while his lie that citizens of Jersey City danced on rooftops as the Twin Towers fell got 19%.
In quarterfinal match two, his recent lie that Obama personally wiretapped him in Trump Tower beat his claim that unemployment was as high as 42% under Obama by a margin of 79% to 21%.
Therefore, the first of two semifinal matches is:

Semifinal Match One of The Untruthful Trump Tournament.


In quarterfinal match three, his lie about getting the most electoral votes since Saint Ronald Of Tampico was easily beaten by his lie that Hillary got votes from millions of illegal aliens by 68% to 32%.
Finally, in match four, his lie about thousands of Massachusetts Democrats being bussed across the border to New Hampshire to vote for Hillary was also eliminated by 68% to 32% by his repeated denials of sexual assault and harassment claims from dozens of women.
The second of two semifinal matches is:


Please vote in both contests to pick the finalists by next Saturday, April 1 (it's purely coincidental that these semifinals will be determined on the same day as the NCAA's F*nal F*ur).

If this tweet were a chess move, Kasparov's opponent would resign.

This tweet from former World Chess Champion Garry Kasparov is the undisputed tweet of the week during a week when the White House and their Republican allies in Congress and the media have tried everything to subvert the Trump/Russia investigations with a much smaller, and completely diversionary, investigation of leaks.

The house is on fire, Trump is running around with a box of matches, and the GOP demands to know who called the fire department.
— Garry Kasparov (@Kasparov63) March 20, 2017

The Quotation of the Day comes from our previous president.

It's so easy to get tied up in knots by the daily flow of crimes and misdemeanors coming from the inarticulate TV-watcher-in-chief currently occupying the White House; I needed to cleanse my mind this afternoon by reading this full interview of novelist Marilynne Robinson by President Barack Obama that appeared in two issues of The New York Review of Books in November 2015.


"...When I think about how I understand my role as citizen, setting aside being president, and the most important set of understandings that I bring to that position of citizen, the most important stuff I’ve learned I think I’ve learned from novels. It has to do with empathy. It has to do with being comfortable with the notion that the world is complicated and full of grays, but there’s still truth there to be found, and that you have to strive for that and work for that. And the notion that it’s possible to connect with some[one] else even though they’re very different from you..." -Barack Obama, 2015

Even though it hurts to know that he's not the president now, it helps to know that Barack Obama is a fellow citizen. I'll say it again (and again and again): The 2016 election was a contest of readers versus brain-dead boob-tube addicts (not to be too judgmental about it), and the TV watchers are currently (but, I hope, temporarily) in control.

You can read the full text of Part One of this conversation in the November 5, 2015 issue of  NYRB and Part Two in the November 19th issue (the quote is pulled from the beginning of the second part).
The full audio version of conversation is available for free from iTunes: https://itunes.apple.com/us/podcast/soundings-from-new-york-review/id284527588?mt=2

I was steered toward today's quotation, and inspired to find the full conversation, by the January 12, 2017 episode of Kurt Andersen's Studio 360, "POTUS as Tastemaker." Thanks Kurt.

Here's Donald Grump of The Apprentice, whose "name is on every piece of trash in town" and his song from episode 4104:

The FBI, Justice Department, and British intelligence may have all publicly denounced Donald Trump's early morning tweets about President Barack Obama personally wiretapping Candidate Trump at Trump Tower, but I discovered during a trip to the supermarket this afternoon that a major defiler of newsprint has joined Trump's friends at Fox & Friends in backing him up. 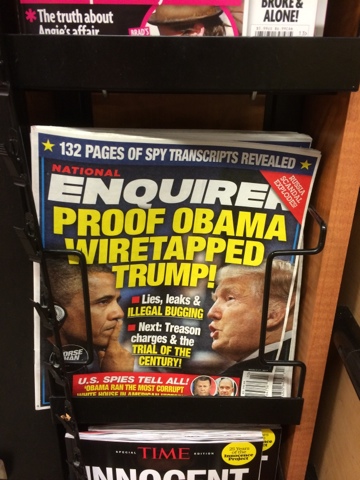 If it's in the National Enquirer -- the only publication the current resident of the White House allows next to his toilet -- it must be true.
Posted by True Blue Liberal at 3/21/2017 01:58:00 PM No comments:

Quarterfinals of The Untruthful Trump Tournament

In match one of the round of 16 that finished tonight, Donald Trump's lie about making Mexico pay for his idiotic border wall was beaten 52% to 48% by his lie that Barack Obama wasn't born in the USA.
In match two, his lie about New Jersey citizens celebrating the attacks on the Twin Towers on 9/11 beat his lie that Ted Cruz's father conspired in JFK's assassination by 66% to 34%.
So the first of four quarterfinal matches is this:


Match five of the previous round saw his lie that he received the most electoral votes of any Republican since Ronald Reagan easily beating his lie about the media ignoring European terrorism by 75% to 25%.
In match six, Trump's untruth about millions of illegal votes for Hillary Clinton beat his whopper about America's low murder rate being the highest in 45 years 83% to 17%.
The third of four quarterfinal contests is:

He got the most electoral votes since Reagan or millions of illegals voted for Clinton?
— True Blue Liberal (@TrueBlueLiberal) March 21, 2017


In match seven of the round of 16, Trump's repeated denials of multiple credible sexual assault and harassment claims garnered 55% of the votes while his recurring tweet about the "failing NY Times" losing subscribers got 45%.
Finally, match eight saw his lie about busloads of Massachusetts voters flocking to New Hampshire to vote against him beat his untrue assertion that US taxpayers face the highest tax rates in the world by 60% to 40%.
So the final quarterfinal matchup is:

Please vote in all four contests before Saturday the 25th, when the two semifinal matches will be set.

The Untruthful Trump Tournament: A bracket without basketball

If the Rutgers Scarlet Knights don't make it to the NCAA tournament (which they generally don't), I don't pay any attention to March basketball. That's no reason to miss all the fun with brackets that much of America is engaging with today.

I just came up with sixteen of Trump's most famous and brazen lies and posted the following eight matches on Twitter. There are four days to vote in Round One. On Monday night I'll post Round Two (winner of Match One facing Match Two, Three facing Four, Five facing Six, and Seven facing Eight).


Untruthful Trump Tournament, Round One, Match One.

Pick One Lie:
Most Electoral Votes Since Reagan? or Media Ignoring European Terrorism?

The House Republicans have finally announced their specifics for replacing The Patient Protection and Affordable Care Act (Obamacare) with The American Health Care Act (Trumpcare). Supporters of Obamacare are appalled at the number of people who will lose coverage and at the way it targets women and older Americans for special mistreatment. The Tea Party wing of the GOP is appalled that Trumpcare is leaving even a few tattered remnants of Obamacare's patient protections; they are calling for a straight repeal of the ACA and a return to the status quo ante a black man in the White House.

Here's a simple poll to determine whether you are a liberal or a conservative.

I believe that replacing the #ACA with #TrumpCare will...
— True Blue Liberal (@TrueBlueLiberal) March 8, 2017