This may be hilarious, but it's NOT a joke.

Here is a link to the actual final 2012 platform of the actual Texas Republican Party. This is not a joke.

Click the link above and find your own favorite/scariest parts. You won't have to read more than one random line before your jaw hits the floor, but here are my "favorites" from each page. In most cases, it was very hard to choose just one:

These are representative of the entire document. There is page after page of these radical ideas. This is not a fringe organization calling for an end to the UN, the IRS, the Fed, minimum wages, Social Security, the EPA, the Departments of Education and Energy, the Endangered Species Act...etc., while simultaneously calling for the imposition of a Puritan social and sexual lifestyle and blatant public state recognitions of religion. This is one of our two major national parties. Their platform needs to be exposed to wider scrutiny and ridicule.
Posted by True Blue Liberal at 6/29/2012 12:47:00 PM No comments:

Here are CNN and Fox News reporting this morning's Supreme Court decision on the Affordable Care Act with all the care of overactive retweeters on Twitter:

I'm not clear from these edits though. Was CNN getting its updates by watching Fox? Or was Fox getting its breaking information from CNN? I'm confused.
Posted by True Blue Liberal at 6/28/2012 11:55:00 AM No comments:

Corporate Rights in America have now trumped any mythical "States' Rights", even in Montana

Dear Montana,
A hundred years ago the citizens of your young state stood up strongly to copper kings like William Andrews Clark, who in the words of Mark Twain, "bought legislatures and judges as other men buy food and raiment. By his example he has so excused and so sweetened corruption that in Montana it no longer has an offensive smell." You didn't just complain about these Gilded Age robber barons. You passed a referendum in 1912 that stated clearly a "corporation may not make ... an expenditure in connection with a candidate or a political party that supports or opposes a candidate or a political party." That clear will of Montana's early citizens was upheld again by the Montana Supreme Court in 2011.
Both the votes of your people and the decisions of your highest court were dismissed by five men on the US Supreme Court yesterday, without hearing the specific merits of your case, and by simply citing - in an unsigned opinion - their own ill-considered Citizens United decision as the basis for ignoring your will.

It should be clear to all of us that the rights of corporations (whether American or multinational) now trump the rights of American citizens, at least according to the 5-4 conservative majority on the U.S. Supreme Court. Dear Montana, Please think about the importance of that thin majority voting against your interests on the Supreme Court before you present your "safe" electoral votes to Mitt Romney in November. His goal is to change that majority to a safer 6-3 or 7-2 for his corporate friends.

You could also try signing Senator Bernie Sanders petition for a Consitutional Amendment, but our current Congress doesn't show any lack of love for corporations desires over states' rights either so the chances of his anti-corporate amendment passing are slim. Our most important task now is to avoid a President who will give a lifetime tenure to more of the worst corporate stooges on the nation's highest court.

It may be cruel, but it's not unusual in the USA.

The real news out of the Supreme Court today is not that the Justices decided children shouldn't be sentenced to die in prison, but that four members of the court -- John Roberts, Sam Alito, Tony Scalia, and Clarence "The Silent" Thomas -- voted to uphold the right of states to impose life in prison without chance of parole for children 14 and under.

"Determining the appropriate sentence for a teenager convicted of murder presents grave and challenging questions of morality and social policy... Our role, however, is to apply the law, not to answer such questions. The pertinent law here is the Eighth Amendment to the Constitution, which prohibits 'cruel and unusual punishments.' Today, the court [majority] invokes that amendment to ban a punishment that the court does not itself characterize as unusual, and that could not plausibly be described as such."            -- John Roberts
Read more: http://www.upi.com/Top_News/US/2012/06/25/Court-No-life-without-parole-for-teens/UPI-69051340639955/#ixzz1ypXQTTpS

He didn't say that life in prison without the chance of parole for a 12-year-old wasn't cruel. Therefore a punishment that is both Cruel AND Usual -- ie, enforced by 29 of our most backward states -- is not unconstitutional in the minds of the four dissenters.  This sort of judicial logic would have upheld slavery.

A liberal watching SCOTUS, even on days when the decisions go the right way by a thin margin, has to be a masochist akin to those on the left who watch Fox or listen to Rush, hence today's anagram: Roberts, Scalia, Alito, Thomas = To Roast a Liberal Masochist.
Posted by True Blue Liberal at 6/25/2012 02:23:00 PM No comments:

I copied this video from the Rolling Stone website, but I'm sure that Josh Fox's main goal is to make sure that everyone who lives and votes in New York sees this. I'll do my part by making sure that the 10 or 12 people who visit trueblueliberal.org have it placed in front of them. "The Sky is Pink" is definitely worth 18 minutes of your day:

Spread the word and post this video everywhere, because we can be sure that this distribution won't be financially supported by the Koch Bros. or SuperPacs, which can easily afford to wallpaper our television screens with nonstop fossil fuel propaganda on every network every night. And we know that the FACTS in this film will be attacked by astroturf organizations and the oil and gas corporations, corporations that Andrew Cuomo won't want to be on the wrong side of when he runs for President in 2016.

My Luddite Resolve Is Weakening

I may finally have to get an e-reader.


I've been lugging the heavy hardcover version of Mason & Dixon in my computer bag lately. Its rewards are worth the effort, but I'd love to be able to carry all of Thomas Pynchon's novels at once, and all the time, without a wagon.
Posted by True Blue Liberal at 6/20/2012 10:54:00 AM No comments:

All the talk about Mitt Romney on his bus tour of the US is making me think about THE bus trip (at least for those of us who came of age in a certain era), so I sought out this video of Jerry Garcia and Ken Kesey on Tom Snyder's Tomorrow Show discussing the Acid Tests (and is it just me, or does Tom seem like he's doing an animated impression of Dan Ackroyd doing an especially clueless Tom Snyder?):


Even with Tom Snyder's strange reference to the antichrist of rock, Ted Nugent, this helped me detox from seeing Republicans on my television and computer.

Romney Running-Mate Anagram of the Day

Looking for anagrammatic advice in their quest to add meaningful diversity to this fall's Republican ticket, the GOP braintrust likes the way that ROMNEY PAWLENTY highlights the fact that the ticket is PARTLY NEW MONEY, with Tim P being the son of a milkman who worked his way through college rather than the son of Governor and auto company president who feels that becoming President of the United States is his birthright.
Posted by True Blue Liberal at 6/17/2012 12:33:00 PM No comments:

On very rare occasions, le mot juste just happens to be in German.
On days like today when the sky is low over New York, I always think that the best word for the city's tallest buildings is not "skyscraper", but "Wolkenkratzer." The German word translates literally as "cloud scratcher." 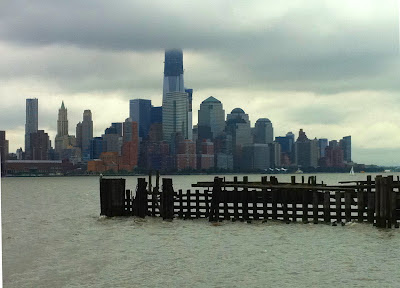 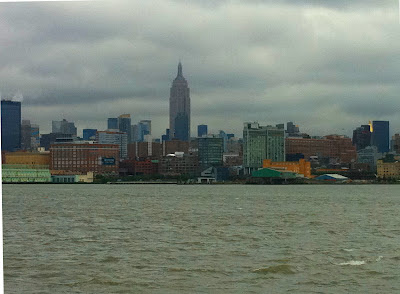 Has Governor Cuomo answered this message yet?

Watch Alec Baldwin and Josh Fox leave a message for Governor Andrew Cuomo about fracking in New York State from the stage of the Landmark Theater in Syracuse on June 2, 2012.


Has the Governor answered Alec's call yet?
How quickly would Andy answer the voice mails left by CEOs of those corporations which are generously promising our state jobs, money, cheap gas, trucks, pumps, derricks, flaming faucets, mystery chemicals, wastewater ponds, dirty air, and poisoned wells (and maybe hint in passing about helping him with his possible Presidential plans in 2016)?
Posted by True Blue Liberal at 6/12/2012 11:20:00 AM No comments:

I didn't have a real camera at work today, but here are a couple of phone pictures of the Space Shuttle Enterprise making its final journey up the Hudson River earlier this morning as it passed the new World Trade Center and the Empire State Building. 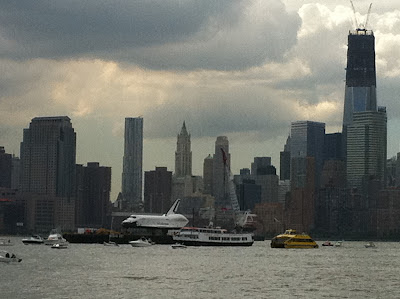 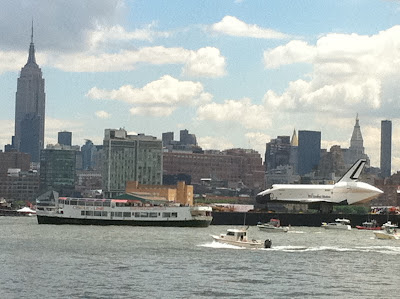 "... a Goddess descended from light to Matter." Happy Transit Day!

I'm celebrating the Transit of Venus taking place on the 5th and 6th of June 2012 by reading the essential fictional account of the Transit of Venus observed and measured by Charles Mason and Jeremiah Dixon in Cape Town on the 5th and 6th of June 1761 (a few years before they drew the line across America that symbolically separates us from our less-liberal brethren).
Turn the first hundred pages of Thomas Pynchon's Mason & Dixon for more reading pleasure and information about tangency, parallax, and the movement of heliocentric bodies, but here's a short paragragh from that long book to whet your appetite: 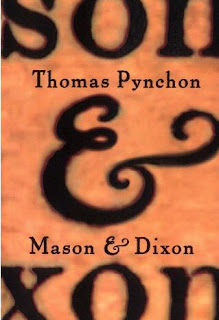 "Ladies, Ladies," Mason calls. "--You've seen her in the Evening Sky, you've wish'd upon her, and now for a short time will she be seen in the Day-light, crossing the Disk of the Sun, -- and do make a Wish then, if you think it will help. -- For Astronomers, who usually work at night, 'twill give us a chance to be up in the Day-time. Thro' our whole gazing-lives, Venus has been a tiny Dot of Light, going through phases like the Moon, ever against the black face of Eternity. But on the day of this Transit, all shall suddenly reverse, -- as she is caught, dark, embodied, solid, against the face of the Sun,-- a Goddess descended from light to Matter." (page 92 of Henry Holt hardcover)
Posted by True Blue Liberal at 6/05/2012 09:07:00 AM No comments: