The Fine White Whine of the Day Comes from the White-Whiner-in-Chief, Reince Priebus

"Until [Griffin] takes internal corrective action and personally apologizes—not just to the RNC but to all right-of-center Americans—I’m banning all RNC staff from appearing on, associating with, or booking any RNC surrogates on MSNBC."  Reince Priebus whined. "Wah wah."


And what caused this fit of pique? 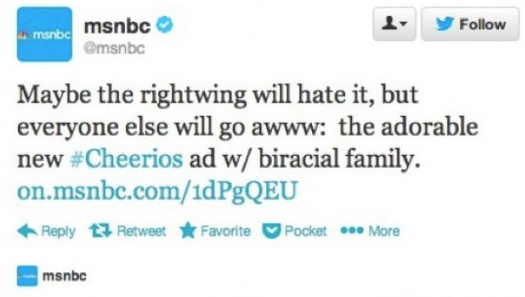 It seems that there was an MSNBC tweet about a Superbowl advertisement that read "Maybe the rightwing will hate it, but everyone else will go awww: the adorable new #Cheerios ad w/ biracial family".  It was taken down and MSNBC apologized (though neither action seems necessary), but Reincey had his reason to cry (even though the RNC and GOP were never mentioned by name). They are really reaching for things to be offended by now.

~~~~~~~~~~~~~~
UPDATE 1/31/2014:
I would like to thank MSNBC for reinforcing the stereotype of liberals as spineless wimps when confronted with the white whine of complaint. Network President Phil Griffin fired the writer of the offensive tweet and the RNC has lifted its boycott of the network.
~~~~~~~~~~~~~~

Best Advertising Placement of the Day.

Slate wins the prize today for the best juxtaposition of editorial and advertising content: 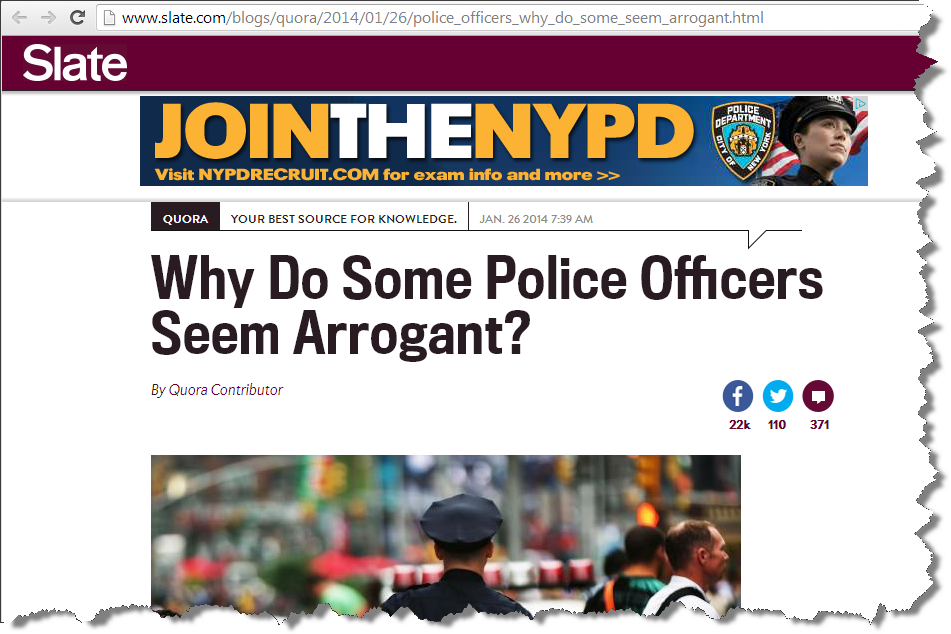 Build "The Pete Seeger Bridge" Between Rockland and Westchester Counties

The unnamed "New NY Bridge" that will be replacing the Tappan Zee Bridge between Rockland and Westchester Counties needs to be named after Pete Seeger, the man who has done more than any other to transform the Hudson River from an "industrial river" in the 1960s suited only as a dumping ground for sewage and GE's PCBs to the thriving and living waterway it is (or is becoming) today.

Here's a video of Pete and friends on the deck of the Sloop Clearwater in 2010 singing "Sailin' Up, Sailin' Down".

"...the river may be dirty now, but she's getting cleaner every day..."

Today, on the day we learned of Pete Seeger's death at the age of 94, the Town of Greenburgh Supervisor Paul Feiner suggested naming the new bridge being built over a section of river the Clearwater knew well in honor of Pete.  He said he would be sending this recommendation to Governor Cuomo and state legislators.  I'm going to be doing the same (and have already started on Twitter). Please consider joining in this cause.

Naming anything to honor this great man would be the exact opposite of the current trend of naming everything in honor of the highest corporate bidders.

So, what does the right-wing media have to complain about today (other than the fact that Michelle Obama mentioned Jane Fonda)? It seems that a film festival being held this week at Winona State University in Winona, Minnesota will not be showing the amateurish pro-fracking film FrackNation, so they are predictably being accused of liberal censorship of anti-environmental films by filmmaker Phelim McAleer. 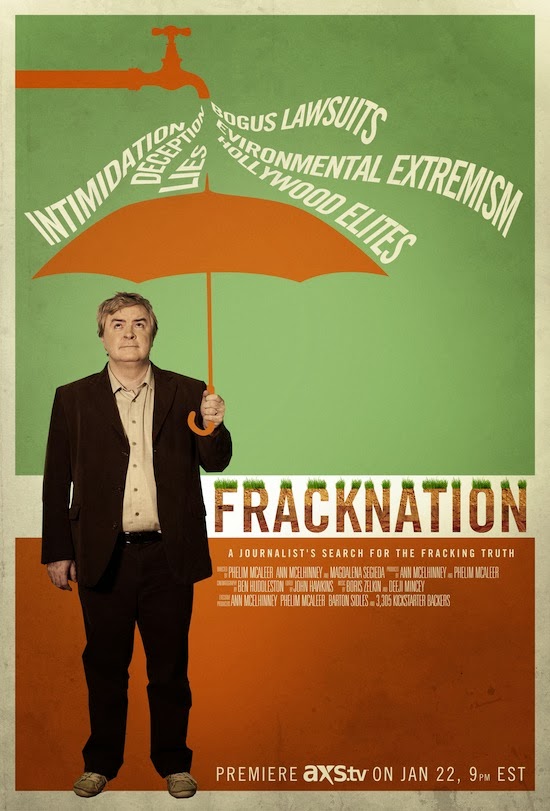 "The film festival organizers seem to hate alternative points of view, they seem to want to quash diversity. They seem to be scared of the truth. Basically the Frozen River Film Festival organizers have given in to bullying and taken the easy way out and censored a film that might offend environmental elites who think they know best. These people are cultural censors and don't want the truth about fracking to be shown to audiences."

If that sounds familiar, he also accused the IMF of censoring him last year by not showing his film. "Basically [yes, he overuses 'basically'] they were censoring my presentation, they were censoring my speech," But this time a group other than 'environmental elites' got the blame. "They're trying to force people not to say terrible things because it could offend one of their senior members. They didn't want to offend Russia."

So, what do the the organizers of this week's Minnesota film festival have to say about giving in to bullying from liberal cultural censors? Here's the statement on the website of the Frozen River Film Festival:

"The Frozen River Film Festival regrets to inform its audience that we will not screen FRACKNATION. There is growing national consensus that the film does not qualify as a documentary and the filmmakers were unable to provide someone to stand-up for the film. Upon original acceptance we stated that a filmmaker attend with the film and join in a moderated public forum, as engagement is an important part of our mission. We offered to pay travel and lodging to anyone from the film who could attend. They declined to send someone, so we will not be screening the film."

When TrueBlueLiberal.org was started right after John Kerry's defeat in November 2004, a large part of my initial impetus for doing so was to show some pride and restore some luster to a word the conservative government and press had hurled as an insult and which liberals themselves (like the cowardly Kerry) and all establishment Democrats had run away from. Who? Me? Liberal? 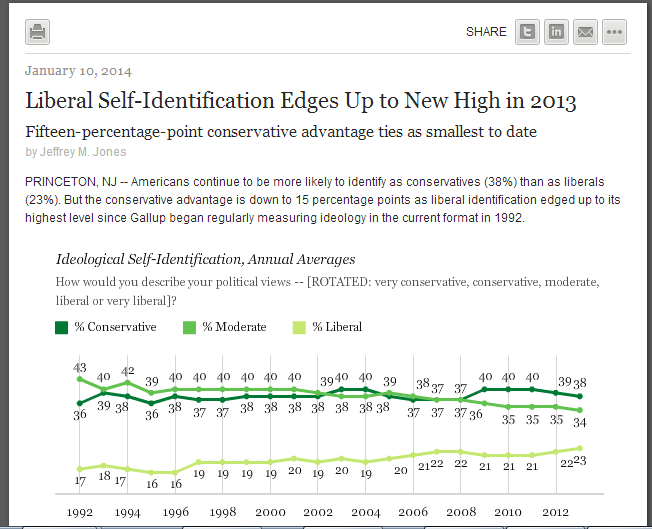 Fuck yeah I'm a liberal. It may not have been much of a rallying cry or a blog's raison d'être, but it was mine.

According to this Gallup Poll today, in 2013 "liberal identification edged up to its highest level since Gallup began regularly measuring ideology in the current format in 1992." 23% of all Americans describe themselves as liberal (up from 19% in 2004), but among Democrats the rise was more dramatic, from 33% to 43% in the decade we've been beating the True Blue Liberal drum. Don't be fooled by the fact that less than a hundred people visit this blog on a normal day. Our influence is obviously enormous.

Preview of 2016 GOP Clown Circus Debate #2: The Elephant in the Room

In December 2015, the 2016 GOP Traveling Clown Circus was scheduled to make its second stop under the gigantic red, white, and blue big top set up on the campus of Oral Roberts University in Tulsa, Oklahoma. 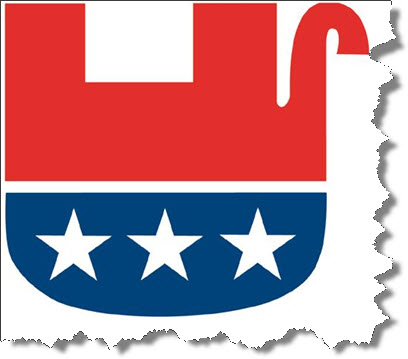 The crowd had been fortified with large quantities of red meat and Red Bull and fluffed into a pre-game frenzy by two of the greatest second-string Saturday Night Live alumni, Dennis Miller and Victoria Jackson, telling jokes about Libtards and Dumbocrats. The star moderator Glenn Beck was in position on his throne, but when the cameras were turned on and it came time to fill the ten podia at the front of the tent meeting, only Governor Christopher James "Chris" Christie strode onto the stage. "Let's go, Glenn."
"We'll have to wait for your opponents, Governor," Mr. Beck announced.
"Yeah? I don't think they're coming," Christie said, laughing.
"I'm sure they'll be here.", Beck said. "We have to wait a minute."
"Actually, I heard from my staff they all went to the Tulsa Hospital Emergency Room unexpectedly with injuries to their lower legs."
"What?"
"Something to do with a steel pipe. Something about which I obviously have no further personal knowledge."
"That's awful. We may have to delay this whole evening then."
"I'll be happy to fill the whole hour and a half. Ask me anything."
"OK, let's start with your sports loyalties. We know that you bravely support the Dallas Cowboys even though the Giants and the Jets both play in the state you were born in and currently govern."
"America's Team! Yeah."
"And you've been known to root for the Notre Dame Fighting Irish when they played your state's university, the Rutgers Scarlet Knights, in a 2013 bowl game."
"Every North Jersey bully worth his salt likes the Irish."
"Both brave and independent stands, but is it also true that your favorite figure skater was Tonya Harding?"
"That little blonde firecracker? America's sweetheart? Who wasn't in love with her?"
"And it's only a coincidence in light of tonight's events?"
"Obviously. Now let's talk about my impeccable bipartisan record and ability to bring people together. You know that I was supported in 2013 by a lot of Democratic New Jersey Mayors who were certainly not threatened or bribed or beaten into supporting me."
...
(The rest of the hour you know by heart from the inspiring biographical Christie campaign commercials that have been running every night on every network since mid-2015.)
...
[and, in case you missed it, here's the partial transcript of the first imaginary 2016 GOP Clown Circus Debate I posted back in November]
Posted by True Blue Liberal at 1/08/2014 09:44:00 PM No comments: