There are a lot of Facebook pages visible on screens around my office this week, and not just among twenty somethings. There are pictures of Christmas puddings and snow drifts that just MUST be shared with all of one's "friends". I've avoided the Facebook so far only because they ask you to register your name when you're sent a link of someone's vacation snaps (and there are "friends" and relatives there to whom I'd prefer to remain invisible). 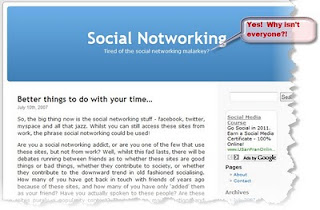 While looking for uses of the term "Social Notworking" just now, I stumbled on a British blog dedicated to the fad, "Social Notworking: Tired of the social networking malarkey?" at www.socialnotworking.co.uk. They have to be given special compliments for posting a couple of entries in 2007 and then losing interest in this stupid blogging fad as well.

I'm making "Social Notworking" my phrase for the fin de l'année, with the hope that looking at family slide shows online hasn't been replaced by something even more stupid by the end of twenty eleven. I still don't understand why the Facebook didn't die on the day that the first student was "friended" by a parent, but I think it's just an age thing. I don't know why college students of the 21st century call their parents on the phone either.

This chart explains why I'm doing all my holiday shopping here or here.

It's hard to believe that it's been thirty years already since we lost this beautiful soul and voice of reason.

THERE'S  ROOM AT THE TOP, THEY ARE TELLING YOU STILL
BUT FIRST YOU MUST LEARN HOW TO SMILE WHEN YOU KILL
IF YOU WANT TO BE LIKE THE FOLKS ON THE HILL

A WORKING CLASS HERO IS SOMETHING TO BE

"There ya go baby!" or Sarah Palin alienates the vegetarian vote

What will Sarah kill next week?

By the way, this rugged-individualist self-sufficient hunting junket to kill a wild animal cost over $42,000, but image is everything and the people who like guns and death and camouflage will love this unrealistic reality-show image as much as they love her brainless flag-waving books.