Words Matter when talking about Terrorism and the Austin Suicide Bomber

Even without having cable, I'm well aware of the fact that the Fair and Balanced Fox News Network has absolutely no problem throwing around the words "terror," "terrorism," or "terrorist," when discussing the actions of dedicated extremists with malfunctioning explosives in their shoes or underwear (especially if those misguided souls are men of color with non-Anglo names). So why am I not surprised that I can't 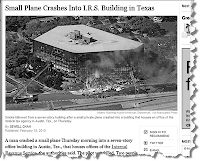 find any word with that terror- root used in any of the online Fox News articles about yesterday's Austin Suicide Bomber, the terrorist (and "normal, right down the middle kind of guy") Joe Stack?

The farthest their language seems to go when discussing this cowardly terrorist murderer is "tax protestor" or "domestic extremist." Their lead online article on him this morning ends with an attempt to understand to poor misunderstood criminal and put him into a larger historical context with which many of their viewers might empathize:

"Thursday was not the first time a tax protester went after an Austin IRS building. In 1995, Charles Ray Polk plotted to bomb the IRS Austin Service Center. He was released from prison in October of last year.

The tax protest movement has a long history in the U.S. and was a strong component of anti-government sentiments that surged during the 1990s. That wave culminated in the 1995 bombing of a federal building in Oklahoma City that killed 168 people. Several domestic extremists were later convicted in the plot."

Terrorism is terrorism. Corporate styleguides matter. Corporate styleguides help form the opinions of those who get their news from the channel of Cheney and Beck and O'Reilly and Palin. How many Teabaggers will feel free to take the next step and consider the Austin Suicide Bomber a hero, along with the murderers of abortion doctors and other criminal heroes of the radical right?
Posted by True Blue Liberal at 2/19/2010 07:30:00 AM No comments:

The Word of the Day is "Terrorism"

I'm just seeing the news now that a disgruntled taxpayer and private pilot (not usually an economically disadvantaged group) purposely flew his plane into a building housing IRS offices in Austin, Texas, killing himself and possibly others. Though he may have failed in his attempt to take out IRS agents and employees, certainly the intent is there to kill other people when flying a plane loaded with fuel into the side of an office building. Some other suicide terrorists certainly expected to kill other people when they did the same thing by flying their planes into office buildings in New York City and Arlington, Virginia in 2001.

"We do not yet know the cause of the plane crash," the Department of Homeland Security said in a release. "At this time, we have no reason to believe there is a nexus to terrorist activity. We continue to gather more information, and are aware there is additional information about the pilot's history." (FROM CNN.com)

If a 53-year-old white American male cannot be called a suicide terrorist bomber just because his name is Joseph Andrew Stack III rather than Mohamed Atta, then the language has no meaning.
Posted by True Blue Liberal at 2/18/2010 05:21:00 PM No comments:

The Word of the Day is "Slumburbia"

"The developers’ favorite role models, the laissez faire free-for-alls — Las Vegas, the Phoenix metro area, South Florida, this [San Joaquin] valley — are the most troubled, the suburban slums [...] this is what happens when money and market, alone, guide the way we live."
--Timothy Egan, "Slumburbia"
on nytimes.com, 10 February 2010

Click the link for his full short blog entry on the ghost towns dotting the Sunbelt that are filled with underwater McMansions and minimalls of cigarette stores and cash advance outlets, but I also love that Timothy Egan quotes another writer of the American West to sum up the religion of economic bubbles and development even more succinctly:

"Growth for the sake of growth is the ideology of the cancer cell."
--Edward Abbey, The Journey Home, 1977

I had read about the "Meet Your Meat" video when reading Jonathan Safran Foer's Eating Animals, but I avoided watching it until today. Not even the soothing familiar voice of Alec Baldwin as narrator makes the images more palatable, which, of course, is the point.
If you're thinking of giving up something other than Christianity for Lent, then you might be well-served by watching at least some of this (or finding more videos at the PETA TV archive).

Of course this isn't just about meat eating, or ethics. It's about corporations and the fact that, in the pursuit of dollars, EVERYTHING is permitted.
But we don't have to support it.
Posted by True Blue Liberal at 2/15/2010 03:34:00 PM No comments:

The Second Word of the Day is "Carnevale"

Who knew that Carne-vale is old Latin for "Farewell to Meat"?! Not me. But it's a great word to keep in mind as we approach Mardi Gras and Ash Wednesday. "Farewell to Meat" is a thought that True Blue Liberal dot org can get behind for all the heath, environmental, and ethical reasons we've touched on in earlier posts.

I stumbled upon the history of the second word of the day this morning on a website called Meatless Monday, which is run in connection with the Johns Hopkins' School of Public Health and has the goal of reducing meat consumption by 15%. If it can't be seven days a week without meat, or five, or three, it's good to start somewhere. I just wonder when they'll be harassed and sued by those same cowkillers who went after Oprah in the '90s.
Posted by True Blue Liberal at 2/15/2010 11:58:00 AM No comments:

The Word of the Day is "Tea-publican"

First there was the "tea party" protester. Now meet the Tea-publican.
Conservative activists who once protested the political establishment are now flooding the lowest level of the Republican Party apparatus hoping to take over the party they once scorned -- one precinct at a time.
--Kathleen Hennessey,
Los Angeles Times, 15 February 2010

I hope I'm not the only liberal who sees great promise in this attempt by the teabaggers to infiltrate the grass roots of the Grand Old Party and complete the process of rotting it from within. The potential for more Republican defeats as right-wing extremists attack more Deirdre Scozzafavas as being insignificantly orthodox on questions of God and Marriage and Abortion seems great. The GOP is in danger of becoming as marginal as it was under Goldwater in '64. To avoid this fate, the few remaining moderate Republicans might actually try to find their backbones and emphatically repudiate the Teapublican agenda (but I doubt it).
Posted by True Blue Liberal at 2/15/2010 10:53:00 AM 1 comment: