POLL: Which "Witch Hunt" Will Ultimately Nab the Witch?

While Robert Mueller continues to compile Trump-Russia evidence in secret, there were public advances this week in both the Trump sex-scandal coverup and emoluments cases. In addition to proving that Donald Trump was lying (which is never news), the Michael Cohen tape aired on CNN on Tuesday night could be important evidence in proving campaign finance violations in the Playboy Model / National Enquirer case (and today we find out the feds have more than a hundred other tapes related to Trump and Cohen). In emoluments and corruption news, there was an important advance yesterday when a federal judge interpreted the anticorruption clauses of the Constitution in a way that will allow the case against Trump's conflicts of interest to proceed.

Which leads to the True Blue Liberal Poll of the Week asking the infallible collective intelligence of Twitter which "Witch Hunt" will be the one most likely to snare the leader of the coven?

POLL:
Which "Witch Hunt" is most likely to catch the lead witch @realDonaldTrump? The #TrumpRussia witch hunt, the sex scandal witch hunt(s), the #Emoluments witch hunt, or some other #WitchHunt?
— True Blue Liberal (@TrueBlueLiberal) July 26, 2018


A ghost of aviation
She was swallowed by the sky
Or by the sea like me she had a dream to fly
Like Icarus ascending
On beautiful foolish arms
Amelia it was just a false alarm
--Joni Mitchell, 1976
Posted by True Blue Liberal at 7/24/2018 09:22:00 AM No comments:

Brandt left us much too soon.

Why type "Donald Trump" when you can simply type "Idiot"?

With shades of "Santorum," savvy internet users now know that if they are looking for images of or webpages about President Donald J. Trump on Google, they can save carpal-tunnel-inducing keystrokes by simply typing i-d-i-o-t. You would think another idiot or two would show up; they do, but you have to scroll down past images of Donald Trump to find them. 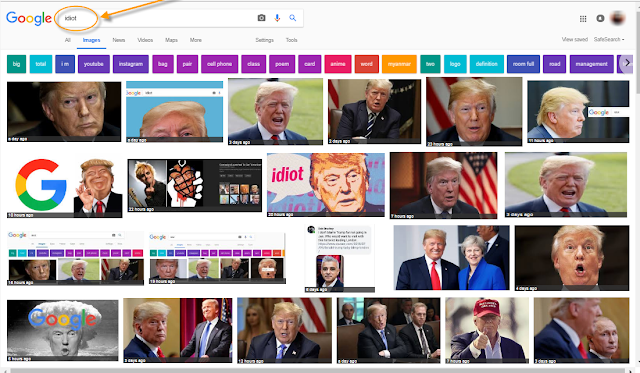 One:
Who is the better liar, Putin or Trump...

POLL:
They both lie, but who lies better, i.e., more, more effectively, and more easily?

and Two:
Can one maintain civility when addressing Trump about his Washington, D.C., military parade with its authoritarian and un-American (i.e., Trumpian) overtones...

POLL:
Is it possible to tell @realDonaldTrump what you think of his fucking pyongyangish #MilitaryParade while maintaining civility? https://t.co/l9PcTu9DNs
— True Blue Liberal (@TrueBlueLiberal) July 19, 2018 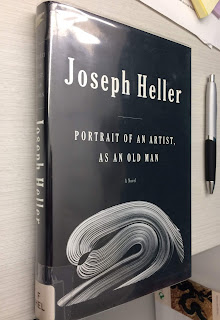 I just started reading Joseph Heller's final novel, Portrait of an Artist, as an Old Man, in which Eugene Pota, an older novelist, is looking for an appropriate subject and plot for his next book. I was surprised to see that one of Pota's early attempts is a story prompted by a memory of the song Yellow Bird. In this novel sketch a young boy lets his mother's new canary out of its cage, a mistake that leads to the yellow bird's death and also leads to his first experience with successful lying when he gets his mother's money back at the pet store.

"Years later, he remembered the yellow bird and labeled the experience his first brush with death. Also his first advantageous negotiation. His first constructive deception. It was all so easily fruitful he resolved to try dishonesty again whenever a situation counseled chicanery. Like Tom Sawyer, he was fond of mischievous deceit, and his antics had never, until the present, tumbled him into trouble. Foppishly, he'd felt himself invulnerable. Absurdly, when elected to the presidency of the country, he'd chosen for himself the code name Yellowbird." 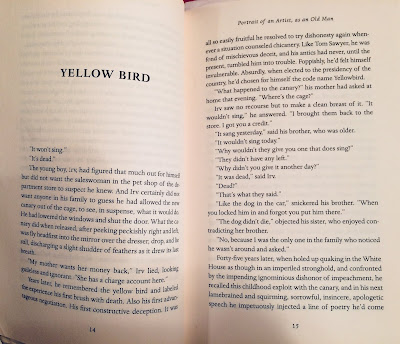 I don't know what this fictional lying president looked like, but wouldn't "Yellowbird" be a great code name for a septugenarian president who insists on wearing a baby-chick yellow wing on the top of his head.

"Forty-five years  later, when holed up quaking in the White House as though in an imperiled stronghold, and confronted by the impending ignominious dishonor of impeachment, he recalled this childhood exploit with the canary, and in his next lamebrained and squirming, sorrowful, insincere, apologetic speech he impetuously injected a line of poetry he'd come upon far back in a place he no longer remembered by a poet no longer of importance to him, interpolating, 'I would rather learn from one bird how to sing than teach ten thousand stars how not to shine...or dance.' That sounded great, he thought, and infused with an ardent surge of confidence, he hastened to venture further into the domain of arts and letters and raced on extemporaneously with a line he associated with Eleanor Roosevelt, that, to wit, it was better to light a candle than curse the darkness. He was pleased with himself after that one too and was basking in his own scholarly sense of himself even before he finished.
"His speechwriters and closest advisors, on the other hand, were aghast. In shocked states of agonized helplessness, they glared at each other with outrage. 'That putz!' grumbled the one from New York City. 'That very dumb putz!' Another, with a polite growl of apology, stepped outside to vomit."

If Twitter had existed in 1999 when Heller's novel was written, I'm sure President Yellowbird would have used it rather than a speaker's podium to embarrass himself. But despite its prophetic qualities, this fictional sketch doesn't become Pota's next novel.


"Who cared? What could it lead to that was worthwhile? Another political farce, another dysfunctional family yarn? Any serious literary work treating those contaminated buffoons in Washington as a herd of contaminated buffoons could no longer be fresh or striking. It would have to be ludicrous and thin, anything but serious, and there had already been too many of those."

Isn't that exactly how a lot of writers are feeling about the "real world" of 2018, with our current president that no serious novelist would ever be able to (or want to) invent?
Posted by True Blue Liberal at 7/07/2018 11:52:00 PM No comments:

70 Years Ago Today, UK citizens got something that US citizens are told is impossible, a National Health Service

How is it possible that a modern National Health Service was achievable 70 years ago in a Great Britain still clearing rubble from World War II and still experiencing food rationing, but is considered impossibly expensive in the world's wealthiest economy, one that hasn't experienced war on its soil since 1865?

I'm simply retyping the historic text of the page above in order to make it searchable and readable on all devices:

Your new National Health Service begins on 5th July. What is it? How do you get it?
It will provide you with all medical, dental, and nursing care. Everyone--rich or poor, man, woman or child--can use it or any part of it. There are no charges, except for a few special items. There are no insurance qualifications. But it is not a " charity ". You are all paying for it, mainly as taxpayers, and it will relieve your money worries in time of illness.