The Bernie Sanders Speech You Didn't See On Your Television

Yesterday afternoon, Senator Bernie Sanders kicked off his campaign for the 2016 Democratic Presidential nomination with the following speech in Burlington, Vermont. When I got home from work I watched all of ABC World News Tonight and the PBS Newshour and it was not even mentioned on either show. I guess I shouldn't be surprised by ABC finding more worth in stories about Jeopardy and how to save money on your cell phone bill, but I expect more from PBS.


I recently downgraded my cable, so I no longer get MSNBC where I assume this speech did get at least a nod. However, it won't help if MSNBC is the only channel covering Bernie's campaign. He is a much more serious candidate than at least 8 or 9 GOP candidates who are given more mainstream air time. His support will come from the bottom up, and not from corporate and billionaire supporters. One thing we know for sure: attendance in Burlington was not mandatory yesterday (unlike Ted Cruz's very-well-publicized kickoff at Jerry Falwell University).

A Traditional Happy Mother's Day to All the Mother People

Not only is it one of my major yearly observances, #PynchonInPublic Day, for which I'm re-reading Gravity's Rainbow on the MetroNorth train to and from work in honor of Thomas Pynchon's 78th birthday, but it's the 70th anniversary of VE Day -- May 8, 1945 -- the day on which Keith Jarrett was born in Allentown, Pennsylvania. I'll listen toThe Köln Concert to celebrate later tonight, but here he is with Gary Peacock and Jack DeJohnette playing "Autumn Leaves."

Carly Fiorina has joined the GOP Clown Circus today and her most prominent web presence is at CarlyFiorina.org. 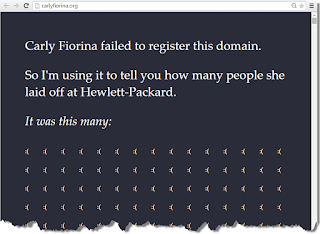 But we can't expect Carly Fiorina to understand technology can we?


Unfortunately, Carly Fiorina hasn't been effectively Santorumed yet. CarlyFiorina.org isn't showing up as the top search result for Carly Fiorina on this first day of her campaign, and it won't unless her name is repeatedly linked to it.