Rockin' in the Free World in Central Park Yesterday

I realize that there are probably people in suits on television this morning speaking about important matters of politics and football, but I'm still on a high from spending all day and night on my feet on the Great Lawn in Central Park in the greatest city in the world watching Neil Young, the Foo Fighters, Black Keys, Band of Horses, and K'naan, so I'm reliving yesterday's Global Citizen Festival with videos.
There are professional videos on the internets already, but I like the way that this amateur video from the crowd brings back the feeling of being there for the closing "Rockin' in the Free World" with Dave Grohl and Dan Auerbach strapping on guitars to join Crazy Horse, and all of the musicians on stage together singing the chorus (along with tens of thousands of others on the lawn):


We got a thousand points of light for the homeless man
We got a kindler, gentler, machine gun hand
We've got department stores and toilet paper
Got styrofoam garbage for the ozone layer
Got a man of the people says keep hope alive
Got fuel to burn, got roads to drive

Keep on rockin in the free world

"Walk Like A Giant" from Neil Young and Crazy Horse

Here's the first official video from the next album from Neil Young and Crazy Horse coming out on October 30 on 2 CDs or 3 LPs, "Psychedelic Pill" (a title full of possibilities for an old Deadhead like me). The song is "Walk Like a Giant" and this kaleidoscopic 4'30" video is only part of an album track listed at over 16 minutes.

I hope they play this when we see them in Central Park on Saturday!


And since posting this a few minutes ago, I found this live version from Red Rocks in August:

"The Liars" by Carl Sandburg

"The Day Carl Sandburg Died" is playing on American Masters on PBS tonight. Yevgeny Yevtushenko was just reading part of The Liars. Here it is in full, as relevant today as it was when written in March 1919:

A liar looks ’em in the eye
And lies to a woman,
Lies to a man, a pal, a child, a fool.
And he is an old liar; we know him many years back.

The liars met where the doors were locked.
They said to each other: Now for war.
The liars fixed it and told ’em: Go.

And now
Out of the butcher’s job
And the boneyard junk the maggots have cleaned,
Where the jaws of skulls tell the jokes of war ghosts,
Out of this they are calling now: Let’s go back where we were.
Let us run the world again, us, us.

Where the doors are locked the liars say: Wait and we’ll cash in again.

So I hear The People talk.
I hear them tell each other:
Let the strong men be ready.
Let the strong men watch.
Let your wrists be cool and your head clear.
Let the liars get their finish,
The liars and their waiting game, waiting a day again
To open the doors and tell us: War! get out to your war again.

In case you missed it here's one of the latest examples of Poor Little Mittens whining that Big Bad Barack is making his inevitable ride to the White House on his White Horse unnecessarily difficult: "Romney Blames Obama for His Campaign Challenges" in the New York Times Caucus Blog.
Posted by True Blue Liberal at 9/24/2012 03:52:00 PM No comments:

Our Military Needs Your Fiver!

There used to be a poster back in the Vietnam years (known to Mitt Romney and the "Parisian Sightseeing Boat Veterans for Truth" as the years of French hell when Mitt could find neither good Velveeta nor real Wonder Bread!) that said something like, "What if Schools Had All the Money They Need and the Air Force Had to Hold a Bake Sale to Buy Bombers?"  Maybe that great day has finally come. Mitt Romney is asking us to give $5 to the military, but he doesn't seem to be promising us a homemade cupcake from Ann Romney's kitchen, so I say No Deal!

"I'm dreaming of a white President / Just like the ones we've always had / A real live white man / Who knows the score / How to handle money or start a war / Wouldn't even have to tell me what we were fighting for."  --Randy Newman, "I'm Dreaming"


It seems significant to me though, because on the morning of September 11, 2001, I was looking forward to walking around the corner to the Sam Goody store on the corner of 42nd Street and 2nd Avenue at lunchtime to buy "Love and Theft".  At noon we were still being told to stay in our building and by late afternoon when I left the office, the album was not on my mind, and all the stores were closed. I can't remember when I finally picked it up. It couldn't have been more than a week or two later, but the excitement about a great recording will be forever overshadowed by events.

Today I hit my local record store as soon as it opened at 11 and picked up "Tempest" (this isn't a review, but I'm loving what I've listened to so far) and for the first time since 2001, there is a visible highlight to the lower Manhattan skyline. I don't believe that "closure" is even a proper word, and that's not what I'm talking about here, but it feels to me, personally, as if we're beginning to close a circle.
Posted by True Blue Liberal at 9/11/2012 02:44:00 PM No comments:

Mitt Romney to Polar Bears: "Your Freeloading Days Are Over."

I didn't see Mitt Romney interviewed by David Gregory on Meet the Press yesterday, but I've now seen a few choice quotes. Just as the most memorable line from his convention speech (for me) was this one: "President Obama promised to begin to slow the rise of the oceans and to heal the planet. [GOP conventioneers snickering and jeering] My promise ... is to help you and your family. [cheers] ", the most jarring line from the Gregory interview I saw was this one:

It's obviously a memorized and well-rehearsed talking point.

It's not a photo or video or song that comes to my mind when I think of this shortsighted profit-driven anti-environmentalism. When I think of the world after the ravages of human-influenced climate change, it's these lines from Section V, "What The Thunder Said," in Eliot's "The Waste Land" that come to mind.

Tomorrow is September 11, the 11th anniversary  of a day we won't soon forget.

Here's a phone picture taken of the lower Manhattan skyline this afternoon, the latest in an intermittent photographic series here on TrueBlueLiberal.org tracking the progress of construction on the new World Trade Center: 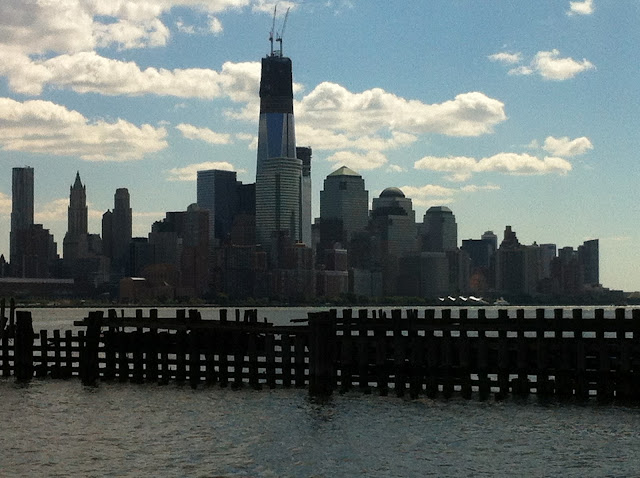