Possible Origins of Inherent Vice , and a belated recognition of The Recognitions

Where does Inherent Vice come from?
"Well," you might answer, "if it's 'inherent,' it doesn't come from anywhere; it's just there."
But I'm not asking about the vice itself, but about the title of Thomas Pynchon's upcoming novel. The title of his last novel, Against the Day, has a full page dedicated to its possible origins and meanings on the PynchonWiki, so I thought I'd put my thoughts about the possible origins of the next novel's title on the record before I get a chance to flip open its cover for the first time. Before anyone beats me to it. 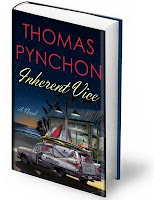 When I first heard the title, my immediate thought was that its sound and rhythm were an obvious tribute to the major work of a younger artist who wrote in Pynchon's shadow, Infinite Jest by the late David Foster Wallace. That tribute may still be part of the title's origin, but over the last month I've had the pleasure of reading a novel (that had been on my list forever) by an older writer who helped pave the way for Pynchon, The Recognitions (1955) by William Gaddis. The phrase "inherent vice" appears throughout the book (eight times on four pages: 182, 234, 355, & 949) and the arguments about inherent vice are at the heart of the book's examination of originality and forgery.

So, did Pynchon read, and was he influenced by, The Recognitions? Is he recognizing its importance in the title of his upcoming novel? For me, the evidence was there and indisputable as soon as I saw the poem at the heart of Gravity's Rainbow, Rilke's "The Duino Elegies", quoted directly on page 277 of The Recognitions and become an important plot point later in the book (see pages 299, 622, 746). Even this could still be simply a coincidental regard for a great poem, but there's no coincidence that could account for the fact that the first sentence of Gravity's Rainbow is a famous echo of the beginning of the Elegies and that The Recognitions ends with a paraphrase of their ending (see the last note, 956.25, on this last page of "A Reader's Guide to The Recognitions").

I may start reading Inherent Vice on the day that it comes out in August and decide that I'm full of shit about the title, but right now I'm sure of my theory of the title's origin. Maybe this little blog entry will even find itself linked to on one of the many Pynchon fan sites one day. What an ambition!


(I've also become an apostle for The Recognitions. Read it! Its rewards are tremendous and it's not as hard as its reputation suggests -- especially if you're a fan of Pynchon's -- but I do suggest that you bookmark WilliamGaddis.org and the Reader's Guide on that site before you start reading. I didn't discover it until I was about 500 pages into the book and starting to get the vast cast of characters confused. The Guide is a great online resource, if only for its translations of the foreign passages.)
Posted by True Blue Liberal at 4/20/2009 08:32:00 PM 1 comment: