I visited the Museum at Bethel Woods for the first time last summer and there was one thing that shocked me. In one of the Woodstock Festival displays, the Jefferson Airplane's early Sunday morning set was described with the word 'uninspired'; it almost (almost) ruined the whole Museum experience.

A Banner Day in the History of America's Gun Culture

Marshal Virgil Earp, Morgan and Wyatt Earp and Doc Holliday Meet the Cowboys--Three Men Killed and Two Wounded, One Seriously--Origin of the Trouble and its Tragical Termination.
-----------
[Tombstone Nugget, Oct. 27.]
The 26th of October will always be marked as one of the crimson days in the annals of Tombstone, a day when blood flowed as water, and human life was held as a shuttlecock, a day always to be remembered as witnessing the bloodiest and deadliest street fight that has ever occurred in this place, or probably in the Territory. ...


You can read the continuation of the detailed description of the event from 134 years ago that has come to be quaintly marketed as "The Gunfight At The OK Corral" in the October 30, 1881 issue of the Arizona Weekly Citizen (click here and start at the top of column 7). Three dead and two wounded? That might not even make the news in 2015, and if it did it would be a minor mass shooting (though the NRA would probably object to the use of "mass" as prejudical when used as a descriptive adjective for such an everyday American event).
Posted by True Blue Liberal at 10/26/2015 03:35:00 PM No comments: 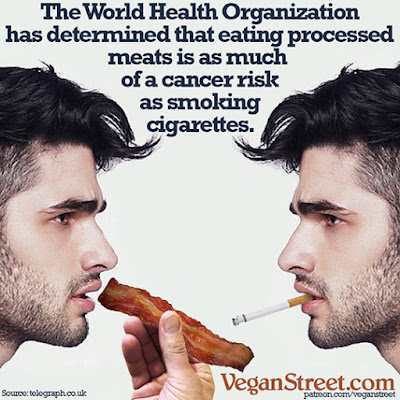 Click here for more details from The Guardian today:
"Processed meats rank alongside smoking as cancer causes – WHO"

In case you missed it on PBS NewsHour earlier this week, here's the great interview with Patti Smith about her wonderful new book, M Train, conducted by Jeffrey Brown.

The entire transcript is available here, but then you'll miss Patti's smile.

Because Bill Kristol has been proved wrong every single time he has opened his mouth -- or let his stubby little fingers plod across a keyboard or touchscreen -- anyone who checked Kristol's Twitter feed yesterday morning got advance notice of Vice President Biden's decision not to run for President this year. 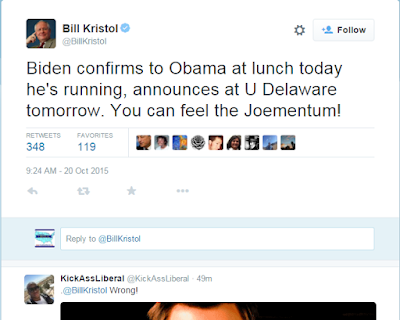 Following the rules of The Kristol Oracle, his confirmation that Joe Biden was going to announce his presidential candidacy today was exactly the opposite; it was advance warning that Joe would be leaving the establishment-Democrat field free for Hillary Clinton to play in by herself.


Since @BillKristol is demonstrably wrong about everything, Hillary can breathe a sigh of relief about any Biden bid. https://t.co/lxrhicMlDo
— True Blue Liberal (@TrueBlueLiberal) October 20, 2015


I need to start following The Kristol Oracle regularly to find out which movies to avoid and which stocks to buy.

And to make this even stranger, he just tweeted a few minutes ago why he wanted Biden to run: 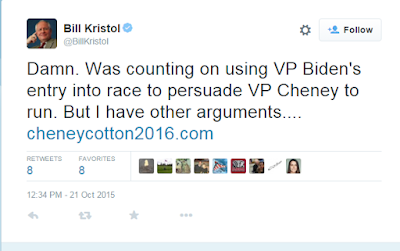 I want to become a falconer...

...just so I can train my hawk to take out drones:

Further Proof that Polls May Tell Us NOTHING in 2016

In some ways, this post is just a follow-up to the "Political Horse Race Polling Is Officially Dead" entry from last week, but I couldn't resist bringing up the subject again after seeing this "Majority say Clinton won debate" headline on The Hill today. The debate winner has been a topic of debate on Twitter since the debate ended on Tuesday night and the CNN crowd of talking heads all declared Hillary Clinton the winner while their live online poll showed Bernie Sanders maintaining at least a 50 to 60 point lead.
The CNN poll was not the only poll going on during the debate, and they all showed a Sanders lead far beyond any normal margin of error; I wasn't the only one grabbing screen shots during the debate.


And it wasn't only instant online polls, it was focus groups as well that were uniformly leaning in Bernie's direction. Here, for example, is Frank Luntz on Fox News with a group of 28 Florida Democrats, half of whom were for Hillary before the debate began:

So how did the "first scientific poll" about the debate reaction manage to come up with a 53%-33% Clinton win over Sanders? Well, first of all, unlike the screen grabs up above, it took place in the two days AFTER the debate, i.e., after the corporate media's barrage of pro-Clinton spin. Second, it involved "Survey Monkey" participants, so you KNOW it's correct.

If this were going to be the only debate, it might be to Hillary Clinton's advantage to have all the official spin spun in her direction, but with five more debates to follow, it may work against her; she may be expected to dominate the next debates just as she "dominated" the first.

"Liberal" Cool? Of Course It Is (and always has been)!

In concert with this morning's post about an article in Salon about "The L Word," I also stumbled upon this story from Public Radio International's The Takeaway: "Is the Word 'Liberal' Becoming Cool Again in America?"

As with the article in the last post, both reassessments of the word were prompted by the Democratic Presidential Debate on CNN on Tuesday night -- a debate which was not (except for Jim Webb) running away from liberal ideals and chasing the Republicans toward the Right.

I found "The Resurrection of the “Liberal”: How the Right Tried to Destroy American Liberalism — and How It Came Back from the Dead" by Heather Digby Parton in Salon fascinating, but that may only be because this blog was started in 2004 in disgust at the way Kerry and Clintons and other Democrats were all running away from a proud label that they were letting conservative Republicans define.

Even if restoring lustre to "Liberal" is not your raison d'être, it's worth reading.

It will be hard to top Ben Carson...

“I never saw a body with bullet holes that was more devastating than taking the right to arm ourselves away.”
--Dr. Benjamin Solomon "Ben" Carson, Sr., October 6, 2015

But how many bodies with bullet holes are necessary to protect our holy God-Given Second Amendment?
Posted by True Blue Liberal at 10/07/2015 01:22:00 PM No comments:

Except for the poll on the sidebar of this blog (which currently shows Bernie Sanders with 83%, Hillary Clinton with 16%, and no other candidate with a single supporter), horse race polling is now obsolete. Official confirmation of this fact appeared on Politico today:

But after a bruising 2012 cycle, in which its polls were farther off than most of its competitors, Gallup told POLITICO it isn't planning any polls for the presidential primary horse race this cycle. And, even following an internal probe into what went wrong last time around, Gallup won't commit to tracking the general election.

Other old-line pollsters like Pew Research are also declining to run horse-race polls at this time, leaving the field open to those who are being paid by Donald Trump. It's probably not quite that insidious, but it's also unsurprising that in an age where no one with any intelligence answers a phone call from an unknown number, the favorite candidate of low-intelligence voters is "winning" all the remaining horse race polls.
Posted by True Blue Liberal at 10/07/2015 11:42:00 AM No comments:

Will BuzzFeed create more vegetarians than PETA with one video?