Looking for a way to move from the 19th into the 20th Century (16 years too late), the Grand Old Party's media consultants couldn't help but look longingly at the successful Comic-Con San Diego 2014 that just wrapped up. Rebranding their convention as Republi-Con Cleveland 2016 is the easy and obvious first step, but they also see real possibilities suggested by nerdy cosplay. Having a stale brand name is only one part of the Republican problem; image consultants have also pointed out the poor optics of having a convention audience nominating Willard "Mitt" Romney in the summer of 2012 that was 98.7% white. Creative cosplay could radically change the look of those traditional monochromatic crowds in 2016. 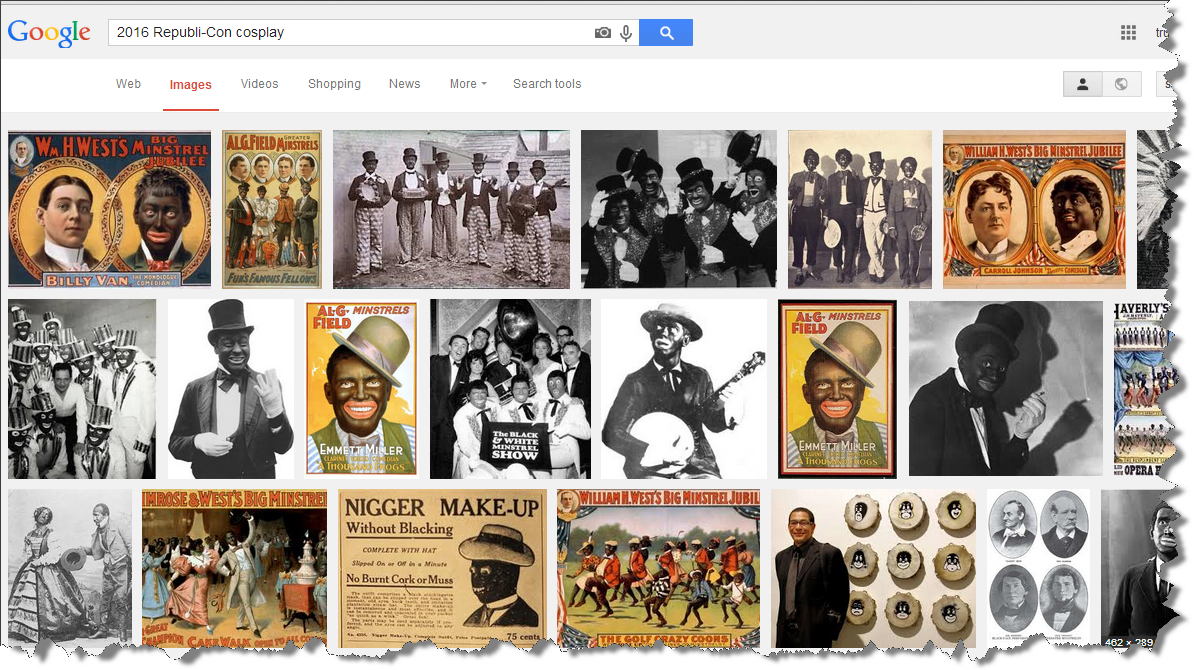 It's important to look behind the curtains to expose the paid political consultants doing the bidding of corporate interests in ads like these:

Of course it's ridiculous to paint those concerned about the effects of fracking on the environment as the flat-earth science deniers when that crown belongs to those who stop their ears and scream to avoid hearing about climate change, but big lies repeated often, and broadcast on TV, have a way of working their way in the public conversation. So who are the people behind that other EPA, the "Environmental Policy Alliance," which created this ad about Colorado citizens who voted against fracking? It's a front group of a well-connected Washington PR firm, Berman & Co, which also operates front groups defending corporate interests in all areas from tobacco to liquor to dietary fat to oil and gas fracking. Here's its leader, Rick Berman, smirking his way through an interview with Rachel Maddow in 2010.


And here's a long list of Berman & Company's current list of front organizations polluting the public debate with corporate money.

"Turn Off, Unplug, Drop Out"

I'd like to present, as a gift to 21st-century youth, the slogan above modeled on Timothy Leary's advice  ("Turn On, Tune In, Drop Out") to those of my generation.

I was on a train this morning where everyone was either looking at or speaking into a phone and I thought once again about how much better the world was before those electronic leashes were invented. People in their teens and twenties today will never know the freedom of traveling for months with no one back in the States expecting any more than an occasional letter or postcard. Then a few minutes ago I stumbled upon this article about a device parents can now install in their teenagers' cars to keep track of them and all of their experiments with speed or other deviations from the norm. The article ends with a warning couched as a simple statement of fact:


"Teens, get used to it. This is America; someone is going to be spying on you for the rest of your life."

It's hard to imagine that some young people (and many of us older people) won't look for at least temporary escapes from corporate, governmental, and familial electronic tethers from time to time, but will we ever see a mass movement to Turn Off, Unplug, and Drop Out? And if that movement develops, will it take place entirely beyond the range of the social media and mass media radar?
Posted by True Blue Liberal at 7/24/2014 10:36:00 AM No comments:

"Use Your Voices or Hold a Light" : Eddie Vedder and 'the most powerful song ever written'

Eddie Vedder and Pearl Jam had never played John Lennon's "Imagine" before last Friday night in Portugal when he picked up an acoustic guitar and sang a solo version (with a few thousand back-up singers). Here are the words he used to introduce the song (from Consequence of Sound) followed by the video.


"You know if you are anti-war. If you're anti-war it doesn’t mean you are 'pro' one side or the other in a conflict. However it does make you 'pro' many things. We are not alone after all. ... Well, so anti-war makes you 'pro' many things. Pro-peace, pro-human, pro-evolution, makes you pro-communication, pro-diplomacy, pro-love, pro-understanding, pro-forgiveness. You know some people don’t understand how you can be pro-soldier. If you are anti-war you're pro-soldier because you don’t want the soldier to be put in harm's way. To sacrifice himself or herself for some reason that’s not…for no good reason. I have many, many…We have many, many friends of the group and through out our lives we’ve met incredible people and in the armed forces. We have an understanding and they listen our music and they get it so I’m not sure…You know sometimes if you speak out people are going to misunderstand and they take things a certain way or another. If you don’t speak out you don’t know. If someone doesn’t like it probably means it has some kind of meaning. It’s not just bullshit. It’s not just nothing. So this next song I always thought it was probably the most powerful song ever written. I think it is the most powerful song ever written. Which is why I have never played it. It seems like maybe there is a reason to play it. If you’d like join me or use your voices or hold a light there might be some people out there that need to know they are not alone.”

So, here's the quote of the day:

Last week in my email to you I synthesized our strategic direction as a productivity and platform company. Having a clear focus is the start of the journey, not the end. The more difficult steps are creating the organization and culture to bring our ambitions to life. Today I’ll share more on how we’re moving forward. On July 22, during our public earnings call, I’ll share further specifics on where we are focusing our innovation investments.
--Microsoft CEO Satya Nadella, in a memo with the subject line "Starting to Evolve Our Organization and Culture" on July 17, 2014


That's the first paragraph of a memo sent to Microsoft staff early this morning. The second paragraph goes on to mention the 18,000 employees who are being severed from the corporate teat (it's reprinted in full HERE in this Wire article, "Slaughter at Microsoft as Tech Giant to Fire 14 Percent of Its Staff").

The moral: If someone in a suit starts talking about synthesizing the strategic direction of your office, start bringing cartons to work to clean the tchotchkes off your desk.
Posted by True Blue Liberal at 7/17/2014 10:36:00 AM No comments:

The Quote of the Week Came from Phil Donahue

"I’d very much like you to see the behavior of the congressmen. They were summoned to the White House by WHIG, White House Iraq Group. This is a Karl Rove committee that included the advertising warriors who named our invasion “Shock and Awe,” and “Rolling Thunder,” like video games. And they gave them their talking points: “A smoking gun will become a mushroom cloud”; “The longer we wait, the more dangerous he becomes”; “Saddam has more weapons of mass destruction than Hitler ever had”; “I see Hitler in Saddam Hussein.” And they read this, they’re looking down at the piece of paper, in what was at most a shell debate, that led to the deaths of over 4,500 service people, men and women both, not to mention how many injuries, we’re not even sure, we’re not even sure how many Iraqis are dead, and the refugees are in the millions.
This is unbelievable. You’ve got to see this debate. It’s truly a very instructive piece on what you can do if you scare the people. George Bush took this nation, the mainstream media included, and led it right into this war. It was an amazingly executed, brilliantly executed, plan. The politics of fear. ..."
--Phil Donahue 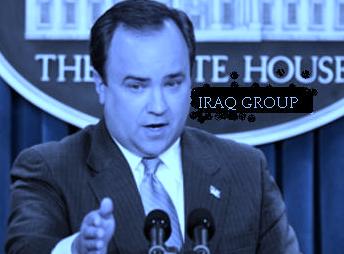 This is from an interview with Elias Isquith in Salon that was published on July 10 with the title, "Phil Donahue’s vindication: Media icon unloads on Fox, Cheney and what happened at MSNBC; Legendary TV host was fired for opposing Iraq war. Here's how he feels seeing the return of those who got it wrong." I couldn't resist repeating this particular part of the interview because he again speaks about the pivotal role of the public relations team, the White House Iraq Group, or WHIG, that lied us into the war, and which I tried to beat the drum about on both trueblueliberal.org and whiggate.blogspot.com since 2005. Every time WHIG comes up in the news again, I make sure I check one thing; I search The New York Times to see if they have yet mentioned the White House Iraq Group in their news pages.  I may be missing something, but I still cannot find it mentioned outside the comments sections and opinion pages. If America's Paper Of Record (which gladly printed WHIG's aluminum-tube lies under Judith Miller's byline) doesn't recognize the existence of the WHIG, did it exist?

(This is being cross-posted on both the TrueBlueLiberal and Whiggate Update blogs)
Posted by True Blue Liberal at 7/12/2014 11:05:00 AM No comments:

Following the singer Joey (2001), bassist Dee Dee (2002), guitarist Johnny (2004), the original Ramones drummer Tommy died earlier today at the age of 62. We still have two original Beatles and four original Rolling Stones, so it's hard to believe that every member of this energetic late-'70s band is already gone.

I don't know about you, but here's the song I always hear in my head and the time and place I always see in my mind's eye as soon as I see or hear the name of this band: "Sheena is a Punk Rocker" at CBGB in 1977.

"Well the kids are all hopped up and ready to go | They're ready to go now | They've got their surfboards | And they're going to the discotheque a go go | But she just couldn't stay | She had to break away | Well New York City really has it all"
Posted by True Blue Liberal at 7/12/2014 09:26:00 AM No comments:

The great bass player Charlie Haden just passed away today. His new album with Keith Jarrett just came out a couple of weeks ago, but here's a video of the two of them from their earlier home-studio collaboration four years ago.

And here they are from much earlier in their long collaboration, in a trio with the late Paul Motian on drums in 1972.

In the random juxtaposition of the day on my Facebook timeline, the lesson is obvious: Paint a Belgian flag on your face and you'll get a contract with L'Oréal; paint your face like a clown and you'll be labeled a gang by the FBI and the Justice Department (or invited to say your peace at the 2016 GOP Presidential Debates). 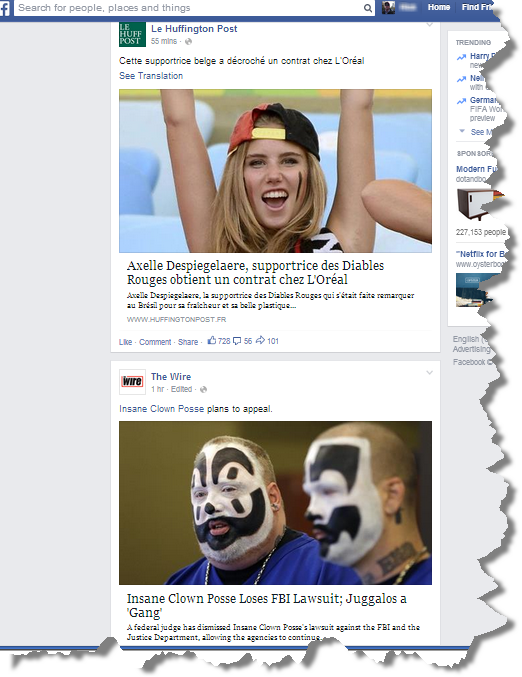 What? Two Days With No World Cup Soccer?

What will we watch until Friday?