It's amazing, but the clearest video representation I've ever seen of Pierre-Joseph Proudhon's famous slogan, "Property is theft!" (first formulated in French as "La propriété, c'est le vol!") is found in Howard Hawks' classic western, Red River. I had posted this movie back in 2011 with the same message, but that earlier clip had been removed from YouTube. Here's the key section of the film again, courtesy of Fandango MovieClips.

The movie ends with John Wayne a respected large-scale landowner, rancher, and all-around successful capitalist asshole. Here he is very early in the film, beginning his Texas real-estate and cattle empire with a murder and the brazen theft of Mexican land that formed his original ranch on the north side of the Rio Grande. I don't think any further explanation is needed to connect the dots to Proudhon's thesis.

A couple of days ago, the most recent ex-Minister of Information for the Trump Administration, Sarah Huckabee Sanders, tweeted that "Democrats say we have guns in America because of 'corruption'. No, we have guns because it’s our God-given right enshrined in the Constitution." 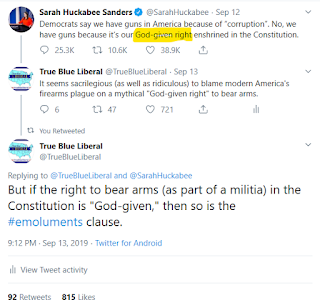 Being the smart aleck that I am, I replied with "It seems sacrilegious (as well as ridiculous) to blame modern America's firearms plague on a mythical 'God-given right' to bear arms." and "But if the right to bear arms (as part of a militia) in the Constitution is 'God-given,' then so is the #emoluments clause." Checking back a couple of days later, I was heartened to see that my replies acquired more than a few likes and retweets, and that there were over 25,000 other replies to her original tweet, most of which were amazed and surprised at her invocation of The Almighty in her defense of assault weapons.

I wasn't surprised. This wasn't the first time I heard this claim about a God-given right to bear arms. It seems to be an article of faith among a certain subculture of Americans. Back in 2012, I quoted at length from the document of a right-wing extremist group, The Platform Committee of the Republican Party of Texas. Not only did they talk about the "God-given right" to open carry your firearm on page 14 of their 2012 platform, but that was one of their less controversial planks. Abolishing Social Security and Income Tax; withdrawal from the UN, IMF, WTO, and World Bank; anti-homosexuality and pro-confederate-monument planks; repealing the Endangered Species and Voting Rights Acts; and much more that makes Donald Trump look like a flaming moderate on the GOP scale of fucknuttery were included. You can read more excerpts here, or the full document here. We sometimes forget in these days of Trump's constant headline-grabbing distractions, that the foundations of know-nothingism run deep in the GOP and USA. The nightmare didn't begin in November 8, 2016.