There's a real danger that when someone has demonstrated no understanding of any of the basic concepts of humor (including, but not limited to, irony, satire, sarcasm, deadpan, self-deprecating, and knock-knock jokes), that person is in danger of taking everything literally.

So please, we can't emphasize enough that no one should ever ever (or at least until he's out of office and far from the nuclear button) let President Trump hear 'Political Science' by Randy Newman.

Randy Newman perfectly understood the world view of Donald and His Deplorables in 1972.

The True Blue Liberal Tweet of the Day came from @TeaPainUSA who distilled two important events into a truth bomb of less than 140 characters: 1) Donald Trump's illegal and chaotic ban on refugees and people from seven countries, and 2) The terrorist attack on the Quebec City Islamic Cultural Center yesterday, where six were killed and 17 were injured, by Alexandre Bissonnette, who seems from early information to be an anti-immigrant activist who was inspired by Marine Le Pen speeches and the timing of Donald Trump's Muslim ban.

More Muslims have been killed by Trump supporters in the past 24 hours than Americans killed by refugees from banned countries in 30 years.
— Tea Pain (@TeaPainUSA) January 30, 2017


As a bonus, I also have a True Blue Liberal word of the day that came from Twitter. Tonight there were massive anti-Trump demonstrations all across the U.K. inspired by Trump's draconian immigration policy alterations. I saw photos online of massive crowds in London, Manchester, Liverpool, Edinburgh, Cardiff, Brighton, and elsewhere, but this photo from Scotland in a tweet from @TotallyCarolyn stood out for the poster it featured. It had nothing to do with the artistry of the hurried black scrawl on cardboard, but the words are priceless, especially the last one, which was new to me: "Yer Maw Was An Immigrant Ya Fucken Bawbag."

Bawbag, n. Scots. Literally a scrotum (i.e., a "ball bag") and figuratively used for any annoying, useless, or stupid person. It should be used regularly in sentences about the half-Scots Donald Trump.
Posted by True Blue Liberal at 1/30/2017 10:30:00 PM No comments:

The People's Climate March is Saturday, April 29 in Washington D.C.

Ignore my earlier posts from Tuesday and Wednesday of this week pushing for a massive Earth Day demonstration on April 22. The Sierra Club and other environmental organizations were way ahead of me, planning a People's Climate March for D.C. on the following weekend, April 29. When I asked, my local chapter of the Sierra Club responded that one reason they didn't choose Earth Day was because they knew of many other local environmental events scheduled for April 22 every year, events that they did not want to distract from or compete with. Also, April 29th is the day before Donald Trump's 100th day in office, a traditionally significant milestone in any president's first term.

So, please bookmark the People's Climate Movement homepage for updates. If Donald Trump hasn't cooked up his Reichstag Fire to suspend civil liberties before then, April 29th in D.C. should be at least as big as the Women's March. See you there.

This tweet from @FoxBusiness a few minutes ago reminds me of when Fox News gave President Obama all the credit for the market advancing from 7,949 to 19,743 during his years in office.

Earth Day or Tax Day? The TrueBlueLiberal Poll of the Week.

As a follow-up to yesterday's post about the potential for attracting millions to Washington, D.C. (and to cities around the nation and the world) on Earth Day, April 22, 2017, I posted the following poll on Twitter a few minutes ago. It will be up for a week.

Which of these Saturdays holds more potential for a record-setting turnout against Donald Trump in D.C.? https://t.co/ZLC97qsWBG #EarthDay
— True Blue Liberal (@TrueBlueLiberal) January 25, 2017

If you have strong feelings about your choice, I'd love to hear them in the comments below (or in a response to the poll on Twitter).

There's an effort to follow up last Saturday's Women's March with a protest about Donald Trump's missing tax returns on April 15th, but there seems to be a more obvious target with mass appeal, Earth Day, which occurs exactly one week later on Saturday, April 22. This seems especially appropriate today, when the new resident of the White House is signing executive orders in favor of the Keystone XL and Dakota Access Pipelines.

The first Earth Day in 1970 not only attracted the support of over 20 million people worldwide, but it led to actual results. A Republican President, Richard Nixon, signed the Clean Air Act, the Clean Water Act, the Endangered Species Act, and established the Environmental Protection Agency by the end of that year. Every single one of these important environmental protections is now under challenge by the current president and the increasingly right-wing GOP Congress.

As much as some of us have been concerned with Donald Trump's missing tax returns (search for #TrumpsMissingReturns to see how often @TrueBlueLiberal tweeted about them), they will not attract millions of people to Washington, D.C. They will not attract interest around the world. And even if April 15th demonstrations goaded Trump into releasing 30 years of complete returns (and they won't), what concrete effect would that have now? We already know that he's used every trick and loophole to pay as little as possible. His voters don't care that he's a con man and a tax cheat, and neither do a lot of non-partisan or low-information voters.

An Earth Day backed and organized by all the major environmental groups would definitely attract millions from around the world. It would not necessarily be seen as a partisan attack by disappointed Hillary voters. Climate change and sustainable sources of energy are major international issues, pipelines and fracking are combustible national issues, many conservative suburban voters are concerned about the welfare of songbirds and monarch butterflies and bees, and Earth Day's universal stress on the Earth seems a perfect foil for the current president's parochial stress on "America First."

Imagine the size of the protest that could be generated by a coordinated effort from Greenpeace and the Sierra Club and the NRDC and Audubon Society and the Earth Day Network and Nature Conservancy and WWF and National Wildlife Federation and the Environmental Defense Fund and the Humane Society and Defenders of Wildlife and Sea Shepherd and the Ocean Conservancy and the Earth Policy Institute and the thousands of other national, international, and local environmental organizations founded since the first Earth Day in 1970. It could easily make the impressive Women's March look small by comparison.

Let's get started. Given a choice between returning to D.C. on April 15th or April 22nd, I choose Earth Day! See you there.

A Surprise for the Next Sean Spicer Press Briefing?

In his first two appearances, Donald Trump's press secretary Sean Spicer has shown himself to be an aficionado  of "alternative facts" and a master practitioner of the Fine White Whine of blaming the press, but the press shouldn't get too comfortable with the routine verbal back and forth.

They should remember that Richard Nixon built the Press Briefing Room over FDR's indoor pool and Sean might be saving his trump card for just the right moment.

Some of my favorite signs from Saturday's Women's March in D.C.

Anyone who was at the sprawling massive Women's March on D.C. last Saturday could only see a small sample of the tens of thousands of creative signs that were made and carried by the hundreds of thousands of marchers. Here are a few of the favorites that crossed my path (most of these photos were taken from a precarious perch on top of a temporary seven-foot tall fence near the Hirschhorn Museum).

Here's Janis with Big Brother and the Holding Company at the Monterey Pop Festival on June 18, 1967.


She was 24 at this performance right before her big breakthrough.

She'll never be older than 27.

Someone Is Desperately Begging for Inauguration Crowds! Sad!

Yesterday afternoon I checked Facebook and found that Donald Trump was personally inviting me to his inauguration on Friday. It seems that the Trump campaign picked me because I fell into that exclusive group of people who are 1) Over 27 and 2) Living in New York.

I feel so special! The president-elect has PERSONALLY invited me to his big shindig on Friday! pic.twitter.com/5DYOZoICuM
— True Blue Liberal (@TrueBlueLiberal) January 17, 2017


I had to send the PEOTUS my regrets; I will be working on Friday, but I will be in D.C. on Saturday for the Women's March (I'll try to take and post a couple of panorama photos here).

At noon today, with just two days to Trump Day, I opened this blog and found that the organizers are still looking to fill empty seats and spaces on the National Mall just 48 hours from now, with this banner ad offering readers of TrueBlueLiberal.org free inaugural tickets. Doesn't he know that if any of my readers click on his banner, this liberal blogger may actually earn a whole penny from Google (OK, maybe one-tenth of a penny, but still, does he want to support the artisanal left-wing media machine at all?)? 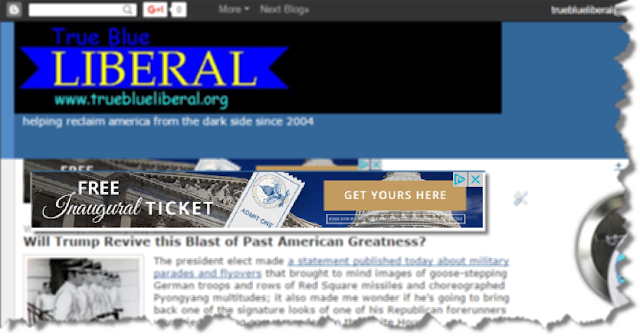 Will Trump Revive this Blast of Past American Greatness?

The president elect made a statement published today about military parades and flyovers that brought to mind images of goose-stepping German troops and rows of Red Square missiles and choreographed Pyongyang multitudes; it also made me wonder if he's going to bring back one of the signature looks of one of his Republican forerunners who tried to install some old-world grandeur at the gates and doors of the White House.

I don't know if Americans under a certain age will remember the immediate reaction to Nixon's Palace Guard uniforms when he introduced them after a European trip in 1970, but they were almost immediately seen as a joke and retired. Americans in those years had a gut reaction to anything that had echoes of faux central-European grandeur and militarism (and toy soldiers and movie ushers and high-school bands). Like Nixon though, I can't help thinking that Donald Trump would look at these gold braids and buttons over double-breasted white tunics topped with gold-encrusted tall black caps and think, Classy! Great! Call Ivanka's best Chinese seamstresses and get them busy!

With the latest news from last night about Donald Trump's Russian entanglements, it seems time to ask the following question. I'd love to know how many of my Twitter followers think that our next President is going to make through an entire four-year term (if, in fact, he makes it to his inauguration).