Lies from a War Criminal. Eleven Years Ago Tonight.

My fellow citizens, at this hour, American and coalition forces are in the early stages of military operations to disarm Iraq, to free its people and to defend the world from grave danger.

On my orders, coalition forces have begun striking selected targets of military importance to undermine Saddam Hussein's ability to wage war. These are opening stages of what will be a broad and concerted campaign. More than 35 countries are giving crucial support -- from the use of naval and air bases, to help with intelligence and logistics, to the deployment of combat units. Every nation in this coalition has chosen to bear the duty and share the honor of serving in our common defense.

To all the men and women of the United States Armed Forces now in the Middle East, the peace of a troubled world and the hopes of an oppressed people now depend on you. That trust is well placed.

The enemies you confront will come to know your skill and bravery. The people you liberate will witness the honorable and decent spirit of the American military. In this conflict, America faces an enemy who has no regard for conventions of war or rules of morality. Saddam Hussein has placed Iraqi troops and equipment in civilian areas, attempting to use innocent men, women and children as shields for his own military -- a final atrocity against his people.

I want Americans and all the world to know that coalition forces will make every effort to spare innocent civilians from harm. A campaign on the harsh terrain of a nation as large as California could be longer and more difficult than some predict. And helping Iraqis achieve a united, stable and free country will require our sustained commitment.

We come to Iraq with respect for its citizens, for their great civilization and for the religious faiths they practice. We have no ambition in Iraq, except to remove a threat and restore control of that country to its own people.

I know that the families of our military are praying that all those who serve will return safely and soon. Millions of Americans are praying with you for the safety of your loved ones and for the protection of the innocent. For your sacrifice, you have the gratitude and respect of the American people. And you can know that our forces will be coming home as soon as their work is done.

Our nation enters this conflict reluctantly -- yet, our purpose is sure. The people of the United States and our friends and allies will not live at the mercy of an outlaw regime that threatens the peace with weapons of mass murder. We will meet that threat now, with our Army, Air Force, Navy, Coast Guard and Marines, so that we do not have to meet it later with armies of fire fighters and police and doctors on the streets of our cities.

Now that conflict has come, the only way to limit its duration is to apply decisive force. And I assure you, this will not be a campaign of half measures, and we will accept no outcome but victory.

My fellow citizens, the dangers to our country and the world will be overcome. We will pass through this time of peril and carry on the work of peace. We will defend our freedom. We will bring freedom to others and we will prevail.

May God bless our country and all who defend her.

Reasserting the True Meaning of Santorum 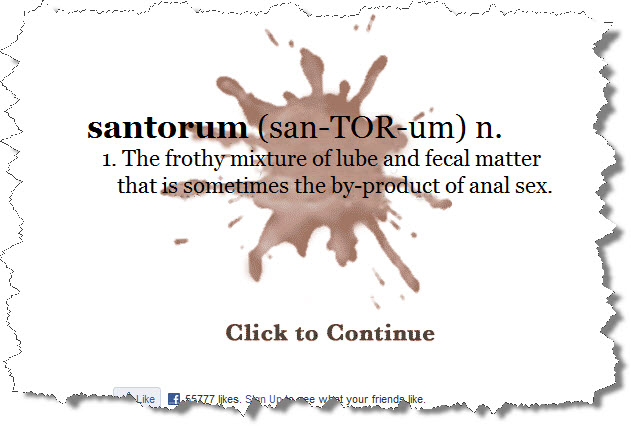 I just noticed that the true meaning of Santorum is no longer at the top of the Google results, so we need to help it once more.

Santorum is getting the correct top result on Bing however.

"I think the thing that is getting a little tiresome, the gay community, they have so bullied the American people, and they've so intimidated politicians. The politicians fear them, so that they think they get to dictate the agenda everywhere."
-- Michele Bachmann, March 2014

"You just don’t in the 21st century behave in 19th century fashion by invading another country on completely trumped up pretext." --US Secretary of State John Kerry on Face the Nation, 2 March 2014

To show that this was the official unironic talking point of the US State Department, here was his statement when he moved from CBS's Sunday talking heads show to NBC's.


"You just don’t invade another country on phony pretext in order to assert your interests.” --US Secretary of State John Kerry on Meet the Press, 2 March 2014