Thanksgiving Greetings from the PEOTUS

Sent in 2013, before Donald Trump was the President Elect Of The United States:


I'm sure that he still wishes all of us 'haters and losers' a Happy Thanksgiving again this year, doesn't he? We can hope.

If you don't want Donald Trump to attack you, just say the magic words, "Hail Trump!"

On Saturday night, at the Ronald Reagan Building in the heart of the District of Columbia, this meeting of alt-right Trump supporters from the National Policy Institute took place, making it clear that alt=neo and right=Nazi, even lapsing into German and Sieg Heil salutes in case that formula wasn't previously apparent.

The duty of President-Elect Donald Trump would seem to be obvious -- offer a clear, complete, specific, and immediate repudiation of these supporters, but I guess we shouldn't be surprised that he had more important things on his mind during this weekend of his busy transition period.

On Saturday and Sunday mornings, the most important thing for @realDonaldTrump to tweet about was the fact that the Vice-President-Elect had been booed by some of the audience at Hamilton on Friday night and the cast had given a short post-show speech. The man who famously never apologizes predictably whined for an apology in three consecutive tweets over two days. 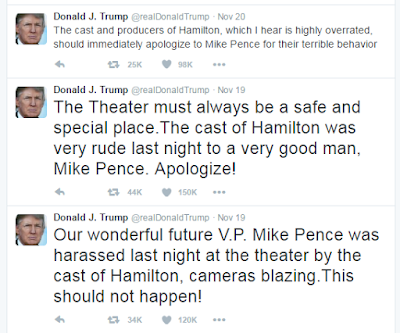 After venting about the need for precious snowflake VP Elects to have safe and special spaces, you would think he would have time to give one half-assed short Twitter rebuttal of his neo-Nazi fanboys, but he was distracted by another cultural atrocity on Saturday night, Saturday Night Live.

There's nothing surprising about Donald Trump's thin skin, but there is so much wrong with this SNL tweet: 1) Republicans are supposed to be as opposed to the equal time Fairness Doctrine as they are to Safe Spaces; 2) Equal Time is not really a consideration once the election is over; and 3) Donald Trump was literally THE HOST of Saturday Night Live on November 7, 2015. We have a President Elect who has no understanding of, or respect for, the First Amendment.

~~~~~~~~~~~~~~
UPDATE 11/22 at 8am:
The stubby little Twitter fingers of @realDonaldTrump still haven't addressed the Nazis speaking in his name, but he did roll off the wrong side of the bed early this morning and took three more shots at the nation's one essential newspaper, The New York Times. 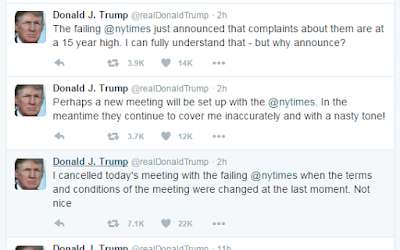 Rick Perry to become Secretary of Oops in the Trump Administration?

According to some reports (this link is from the CBS affiliate in Austin, Texas), Rick Perry is being considered for the positions of Secretary of Defense or Secretary of Energy.

The most famous moment of Rick Perry's 2012 campaign for the White House (before he started wearing eyeglasses to make himself look more intelligent) came at the November 9, 2011, CNBC Republican debate when he attempted to list the three cabinet departments that a President Perry would eliminate. They were the departments of "Commerce, Education and the unh ... and unh, what's the third one there?" He couldn't remember his own proposal to do away with the Department of Energy.

RICK PERRY: But the fact of the matter is we better have a plan in place that Americans can get their hands around. And that's a reason my flat tax is the only one of all of the folks -- these good folks on the stage -- it balances the budget in 2020. It does the things to the regulatory climate that has to happen. And I will tell you, it's three agencies of government when I get there that are gone. Commerce, Education, and the unh ... unh what's the third one there? Let's see.
RON PAUL: You need five.
PERRY: Oh, five, OK. So Commerce, Education, and the.. unh unh unh
MITT ROMNEY: EPA?
PERRY: EPA, there you go.
JOHN HARWOOD: Seriously, is the EPA the one you were talking about?
PERRY: No, sir, no, sir. We were talking about the unh agencies of government -- the EPA needs to be rebuilt. There's no doubt about that.
HARWOOD: But you can't -- but you can't name the third one?
PERRY: The third agency of government I would -- I would do away with, Education, unh the unh ...
ROMNEY: Commerce.
PERRY: Commerce and, let's see. I can't. The third. I'm sorry ... Oops.
Posted by True Blue Liberal at 11/21/2016 11:43:00 AM No comments:

This video from the early months of the Obama White House is even more bittersweet as those eight golden years are in their final months.

A Word From Our Sponsor, Dump Trump

Dump Trump buttons now available in two sizes and at bulk prices -- great stocking stuffers for kids of all ages!

kak·is·toc·ra·cy. The TBL Word of the Day

Why aren't we hearing the word 'kakistocracy' more often since last Tuesday's vote? Even better than plutocracy or aristocracy or oligarchy, speaking about a government of the kakistos (Greek for 'the worst'), seems so much more appropriate in November of 2016 than talking about government by the ploutos, aristos, or oligos.

It may seem slightly unfamiliar to many today, but kakistocracy is a word that everyone will have added to their everyday vocabulary by inauguration day. 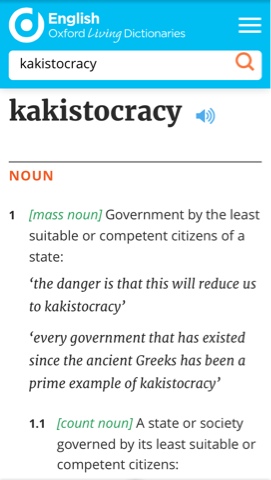 In other big vocabulary news from Oxford Dictionaries, yesterday they announced a 2016 Word of the Year that also had Trumpian and Brexit echoes: 'Post-truth'

Your semi-regular reminder that there are Americans stupid enough to believe the National Enquirer....

...and they all voted for Donald Trump last Tuesday.

One Thing We Can Do Today.

I had a plan for this morning. Though I'm a digital subscriber to The New York Times, I was going to run out early and buy a print copy of today's paper with its headline about America's first woman president. I was going to put it away with these copies from 2008 for my one-year-old granddaughter.

I have no desire to buy (or even see) a print copy of the Times this morning, but I have another plan. I want anyone who reads this to think about subscribing to the Times or the Washington Post, or your local newspaper that probably endorsed Hillary Clinton along with every major print publication in the nation.  In many ways, last night's result was a victory of the illiterate reality-television world over the world of printed words. Subscribe to the Times if only to prove the man wrong who unfailingly and gleefully refers to this essential national publication as the "failing @NYTimes" whenever he tweets about it.


The failing @nytimes reporters don't even call us anymore, they just write whatever they want to write, making up sources along the way!
— Donald J. Trump (@realDonaldTrump) October 15, 2016


I don't work for the Times or the Washington Post or any other newspaper, but I consider subscribing to at least one paper as a civic duty of anyone concerned about the First Amendment. Think about it as a non-deductible charitable contribution if you need to. Think about it the same way you think about contributing to your local PBS or NPR station. We need them all all the time, but we will need them all even more over the next four years.

Many People Are Saying That This Is One Conspiracy Theory That Actually Makes Sense.

We all need a little bit of non-election news today, don't we?

The FBI needs to be kept under control of civilian authorities.

With the election coming in less than four days, it's too late to take any pre-election action against a rogue Federal Bureau of Investigation that seems to be trying to hurt Hillary Clinton and help Donald Trump with selective last-minute leaks and innuendos, but the FBI is going to have to be put under control after the election.

The 44th President Barack Obama will not be the first chief executive to have concerns about an out-of-control secret federal police force.

It's probably not too much of a stretch to assume that J. Edgar Hoover was at least one of the people Truman had in mind when he suggested that "some people" would like to turn the FBI into a Gestapo-like agency. The FBI can't be expected to police itself, or limit its own power. But somebody has to do it.