Be There for Bees.

We should continue complaining about the role of chemical giants like Monsanto and Bayer (and the impotent EPA) and their role in the Colony Collapse Disorder that is killing bees, but there are things we can do that could help immediately. 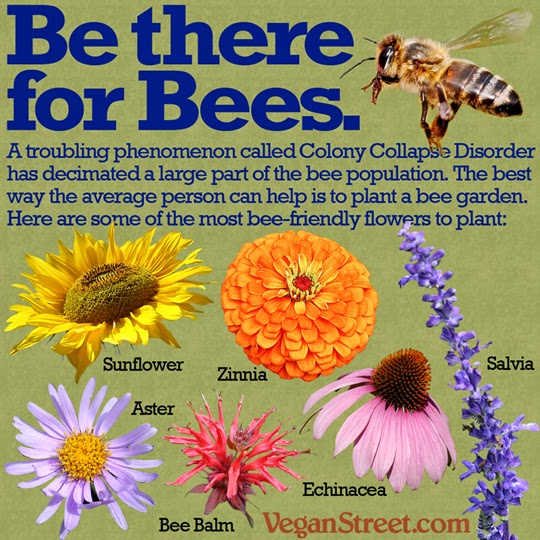 And salvia, purple coneflowers, asters, bee balm, zinnias, and sunflowers have other benefits as well, not only psychological.
Posted by True Blue Liberal at 5/28/2014 12:08:00 PM No comments:

The Eyes of Grace Slick

...and the song I can't get out of my head today on Rachel Carson's birthday:

'Eskimo Blue Day' from the Jefferson Airplane (featuring Grace and Jorma) live at the Family Dog in 1970.

Putting the Day into Perspective

Here's the live video stream from the International Space Station:

A little bit of background first: Rutgers University invited one of the Iraq War principals, Condoleezza Rice, to be the 2014 commencement speaker. She may not ooze the same stench of pure evil that follows Donald Rumsfeld and Dick "Dick" Cheney in a thick visible cloud, but there should have been no surprise that offering her an honorary degree and $35,000 to speak would engender some protest from students and faculty and alumni. The invitation to Dr. Rice was not withdrawn by the University after growing protests, but she withdrew magnanimously over the weekend, "Commencement should be a time of joyous celebration for the graduates and their families. Rutgers' invitation to me to speak has become a distraction for the university community at this very special time."

Her supporters are shocked and stunned. In the following video we have a right-wing hack Steve Malzberg interviewing the head of the Rutgers College Republicans, Donald P. Coughlan, who states that "an overwhelming majority of students seemed to be really excited to see her" and that there was only a small vocal minority of 50-100 students protesting her appearance in the past week:

Even better is the young Republican's open letter to the University President Robert Barchi itself in which this statement appears: "As the protests escalated to your office, university property was damaged further frightening students who do not share the opinion of the protestors and preventing them from voicing a counter opinion." The "overwhelming majority" of more than 30,000 Rutgers students were "frightened" to speak in defense of Dr. Rice because of the actions a handful of people who broke a pane of glass and wrote on a wall? That's some fine white whine. (Maybe not a fine as the vintage white whine coming from Rutgers' New Jersey neighbor Princeton this week, but still some good stuff.)

Oh, unsurprisingly, Fox is all over the young Republicans' outrage and Newt Gingrich has piped in to say that Dr. Rice's decision not to appear at Rutgers is a result of "liberal fascism." Those liberals at Rutgers should just forget, or at least remain silent about, the hundreds of thousands killed and wounded and tortured under the Bush administration's wars (in the same way conservatives are forgetting the four Americans personally killed by Hillary Clinton in Benghazi).