And let's impose super-secret double-life imprisonment in Gitmo for liberals who publicly disparage the sacred patriotic ribbon magnets on our SUVs! 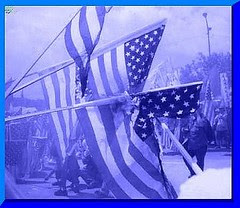 From The Guardian, "Democrats Fear GOP Push on Flag-Burning" 23 June 2005:

The GOP-led House voted 286-130 on a measure Wednesday that would give Congress authority to ban desecration of a U.S. flag. Its prospects aren't good in the Senate, but Republicans could still get what they want - an issue that divides or even conquers Democrats in the 2006 and 2008 elections.

The GOP wouldn't be that deviously political about something as sacred as the Red White And Blue, would they?


And from The True Blue Liberal Pronunciation Dictionary:

Remember that "GOP" is always pronounced to rhyme with slop or glop or flipflop! (And SUV rhymes with glove.)

I went to Old Navy yesterday to buy some T-shirts. You wouldn't believe the amount of flag-desecration going on in that place, all in the name of Fourth of July casual wear.

Time was it was a scandal to have an American flag tie or shirt. Now Tommy Hilfiger does it all the time. Standards evolve, so an amendment is lunacy. It's just a wedge issue anyway. Thing is, this same amendment has passed the House before, I think. I think it's passed the House about seven times, actually. They just want a way to "get Corzine", is how I see it. The national GOP really doesn't "get" NJ. DO they think Field Marshall Rove calling New Jerseyans "traitors" is gonna fly around here? Someone should tell Rove, "This isn't Alabama, kleine Fuhrer."

I remember when Abbie Hoffman was arrested for wearing an American flag shirt and this past Memorial Day the Chairman of the Joint Chiefs of Staff was wearing one. And people aren't being singled out for their speech and ideas?

And why is it that the only Amendments that conservatives propose are amendments to restrict our freedoms?

And Karl Rove will remain "der kleine Fuhrer" in my mind's eye; thanks for the image.