Whose Election Is It Anyway? The Guardian reports on our Former First Lady's whereabouts.

At this moment, 3:15pm on 3/19/08, major American news sources I check regularly (NY Times, Washington Post, CNN... ) have nothing prominent on their front pages about the release of 11,000 pages of Hillary Clinton's White House schedules today, but the paper of record in the UK, The Guardian, has this story prominently featured at the top of their splash page under the headline, "Clinton not in White House at key foreign policy times." 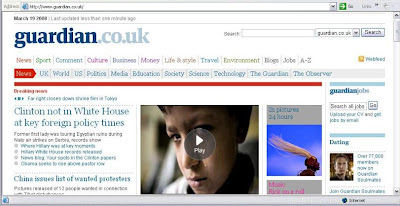 You can scan through all the diaries for yourself right here, through a link at the Clinton Library.

Here are a few of the Guardian's initial findings from today's data dump:

. . . Clinton has said she helped negotiate the April 1998 Good Friday agreement between warring factions in Northern Ireland. But while Catholic and Protestant figures hashed out last-minute details of a power-sharing agreement in Belfast, Clinton was at the National Press Club in Washington at a party honouring Bella Abzug, a congresswoman from New York City who had died recently. While President
Clinton phoned major participants in the peace talks, she met with Holocaust survivor Elie Wiesel and joined a farewell party for Democratic operative Karen Finney. On the day the agreement was actually signed, she met with Philippine first lady Amelita Ramos.
When Nato launched air strikes against Serbia in an attempt to punish Yugoslav president Slobodan Milosevic for the country's onslaught against ethnic Albanian separatists in Kosovo, Clinton toured ancient Egyptian ruins, including King Tut's tomb and the temple of Hatshepsut. She dined at the Temple of Luxor, and stayed overnight at the Sofitel Winter Palace Hotel there.
On August 20, 1998, Bill Clinton ordered US missile strikes on suspected terrorist sites in Sudan and Afghanistan. The president and Hillary Clinton were on holiday on Martha's Vineyard, a posh island vacation spot off the coast of Massachusetts. After announcing the attack, Clinton cut short his break and returned to Washington to confer with his national security team; Hillary Clinton remained on the Vineyard until August 30, her records show.

But even at key moments when she wasn't absent from the White House, she wasn't necessarily paying attention:

On November 15 1995, when President Clinton is said to have begun his affair with White House intern Monica Lewinsky, she was in the White House, according to her schedule.

And if you have the patience to dig through piles of redacted government documents at http://www.clintonlibrary.gov/hrcschedules.html, we'd love to hear about any interesting findings in the comments.
Posted by True Blue Liberal at 3/19/2008 03:23:00 PM