Reality Check: While we're debating the merits of President Obama or President Clinton II, we still have this asshole in charge 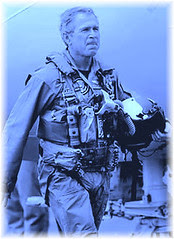 While we're debating whether Obama and/or Clinton have the qualifications to be Commander-In-Chief, we get the occasional reminder of what happens when the office is held by someone's who's obviously unqualified. Today's reminder came in the form this quote from a George W. Bush teleconference with soldiers who are actually in Afghanistan:

"I must say, I'm a little envious. If I were slightly younger and not employed here, I think it would be a fantastic experience to be on the front lines of helping this young democracy succeed."
"It must be exciting for you ... in some ways romantic, in some ways, you know, confronting danger. You're really making history, and thanks."

Well, I hope the soldiers took that gem of absolute bullshit with the grain of salt it deserved. Because when he was younger, and there was another war going on, and when he wasn't employed in any meaningful job, he did everything he could to use his place of wealth and privilege to stay out of Vietnam (a war to which he was glad to play lip service while playing soldier, when it didn't interfere with his social life). Though the Rovians were successful in distracting us from the Chickenhawk charges with an attack on one of its messengers, Dan Rather, there is still a good compilation of his rich-man's draft-dodging escapades available at AWOLBush.com. 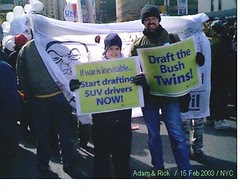 . . . the truth is that every morning war is declared anew. Thus those who wish to continue it are as guilty as those who started it, perhaps more so, for the latter may not perhaps have foreseen the full horror of it.

--Marcel Proust
From the 2003 translation of Finding Time Again translated by Ian Patterson. This is Charlus talking to Marcel about the Great War raging on their doorsteps (p. 105 of the Penguin UK paperback).