Harold Pinter on Donald Rumsfeld and "the palpable joy in destruction"

Part I of "Bush's War" on Frontline is just ending on Channel 13 as I write this. It seems in watching this program that the title could have been "Rumsfeld and Cheney's War". It's more obvious than ever that these two are the chief murderers of 4,000 American soldiers and hundreds of thousands of Iraqis over the last five years.

Watching it, I couldn't help thinking of this speech of Harold Pinter's before the House of Commons on January 21, 2003, two months before the beginning of the endless American war against Iraq. I originally posted this when it was announced in October 2005 that Pinter had won the Nobel Prize for Literature.

One of the more nauseating images of the year 2002 is that of our Prime Minister kneeling in the church on Christmas Day praying for peace on earth and good will towards all men while simultaneously preparing to assist in the murder of thousands of totally innocent people in Iraq.

I've been taken to task recently by the American Ambassador to Britain for calling the US Administration a blood thirsty wild animal. All I can say is: take a look at Donald Rumsfeld's face and the case is made. 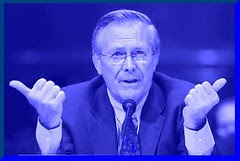 I believe that not only is this contemplated act criminal, malevolent and barbaric, it also contains within itself a palpable joy in destruction. Power, as has often been remarked, is the great aphrodisiac, and so, it would seem, is the death of others.

The Americans have the ostensible support of the 'international community' through various sure-fire modes of intimidation; bullying, bribery, blackmail and bullshit. The 'international community' becomes a degraded entity bludgeoned into the service of a brutal military force out of control. The most despicable position is that of course of this country which pretends to stand shoulder to shoulder with its great ally while in fact being more of a whipped dog than anyone else. We are demeaned, undermined and dishonoured by our government's contemptible subservience to the United States.

The planned war can only bring about the collapse of what remains of the Iraqi infrastructure, widespread death, mutilation and disease, an estimated one million refugees and escalation of violence throughout the world, but it will still masquerade as a 'moral crusade', a 'just war', a war waged by 'freedom loving democracies', to bring 'democracy' to Iraq.

The stink of the hypocrisy is suffocating.

This is in reality a simple tale of invasion of sovereign territory, military occupation and control of oil.

We have a clear obligation, which is to resist.

Sometimes it takes the subtlety of a Nobel laureate's pen to put this crime in perspective (once again).
Posted by True Blue Liberal at 3/24/2008 11:00:00 PM