Hey, White Guys from Pennsylvania! Do You Know What "They" Are Saying About You? 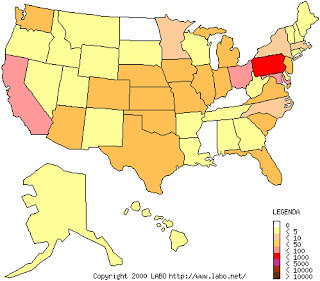 This map shows the surname distribution of the writer of TrueBlueLiberal.org.
Create a map with your surname's distribution at www.gens-us.net.

I may live in the state to your east now, but I'm one of you (a ninth-generation Pennsylvanian) and I'm pissed that the editorial writers and Sunday morning talking heads are all parroting a variation of the same line about Barack Obama's historic speech (which will be known in America's future textbooks as "A More Perfect Union"). Not to oversimplify too much, but the argument with which "they" all agree seems to go like this: "This may have been one of the most eloquent speeches delivered in the United States in half a century -- certainly the most eloquent speech of this young century -- but Tom Sixpack, Dick Beergut, and Hardhat Harry of Pennsylvania only have the attention span to watch short out-of-context clips of Jeremiah Wright sermons on Fox News; they will never watch or read the entire Barack Obama speech on race delivered in Philadelphia. And if Pennsylvania's Toms, Dicks, & Harrys do somehow accidentally read the words, they won't understand or be moved by them."
Please prove them wrong on April 22nd!

If you can't see the video up above, please read the transcript, in which the words lose none of their power.

Barack Obama gives Tom, Dick, and Harry a lot more credit for understanding these issues and these arguments than those who try to mediate (or influence) the conversation between candidate and voter. Read and listen to some of his words directly:

"Like the anger within the black community, these resentments [of the white working and middle class] aren’t always expressed in polite company. But they have helped shape the political landscape for at least a generation. Anger over welfare and affirmative action helped forge the Reagan Coalition. Politicians routinely exploited fears of crime for their own electoral ends. Talk show hosts and conservative commentators built entire careers unmasking bogus claims of racism while dismissing legitimate discussions of racial injustice and inequality as mere political correctness or reverse racism.
"Just as black anger often proved counterproductive, so have these white resentments distracted attention from the real culprits of the middle class squeeze – a corporate culture rife with inside dealing, questionable accounting practices, and short-term greed; a Washington dominated by lobbyists and special interests; economic policies that favor the few over the many. And yet, to wish away the resentments of white Americans, to label them as misguided or even racist, without recognizing they are grounded in legitimate concerns – this too widens the racial divide, and blocks the path to understanding."
--Barack Obama
Philadelphia, March 18, 2008

If anyone forwards you a video or transcript of an out-of-context Jeremiah Wright sermon, send them the links to the transcript and video of "A More Perfect Union." How much better will this country be if we start to assume that every citizen can read and appreciate a well-reasoned, well-written, and soberly-delivered speech that treats us like adults and partners in running (and improving) this nation?
Just asking,
True Blue (Pennsylvania) Liberal
Posted by True Blue Liberal at 3/23/2008 02:07:00 PM