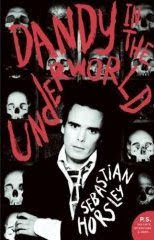 Yesterday we had an event that made the world look at the United States of America with hopeful eyes.

Today we have the kind of story that Europeans love to read about us Puritans across the pond when they feel the need to feel superior.

Today we read the story of Sebastian Horsley, the author of Dandy in the Underworld (a memoir that includes descriptions of drug use and prostitutes that may have been semi-fictionally enhanced) being denied entry to the United States at Newark "Liberty" International Airport. He was unable to attend his own book publication party in New York because “...travelers who have been convicted of a crime involving moral turpitude or admit to previously having a drug addiction are not admissible.”
The "moral turpitude" police in Newark, New Jersey probably didn't see the irony of this happening during a week in which the ex-governor of New Jersey publicly admitted a threesome with his wife and chauffeur, the ex-governor of neighboring New York just quit because of his $80,000 prostitute habit, and the brand-new governor of New York admitted to multiple affairs on his first day on the job.

Now that Barack Obama has eloquently opened the door to an open discussion of race in America, maybe another candidate (Hillary?) could give a groundbreaking speech about our tortured attitudes toward sex in America.
Posted by True Blue Liberal at 3/19/2008 05:35:00 PM