The Real Dream Team! ... if you love their war and the Iraq-War Recession, you'll love the next four years with these two in power . . . 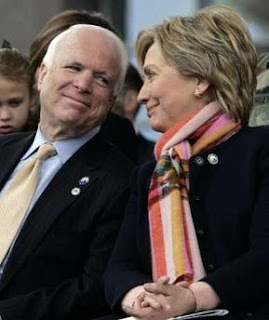 over at BuzzFlash.com for more details.

"I think that since we now know Sen. McCain will be the nominee for the Republican Party, national security will be front and center in this election. We all know that. And I think it’s imperative that each of us be able to demonstrate we can cross the commander-in-chief threshold,” the New York senator told reporters crowded into an infant’s bedroom-sized hotel conference room in Washington.
“I believe that I’ve done that. Certainly, Sen. McCain has done that and you’ll have to ask Sen. Obama with respect to his candidacy,” she said. [read more here]

It's time for John Edwards and anyone else with a constituency in the Democratic Party to make a formal endorsement of Barack Obama. Now. They can no longer afford to wait the five and a half weeks until her next "firewall" in Pennsylvania on April 22. The divisive racial politics of her surrogates, and her direct questioning of Barack Obama's credentials, has gone beyond the pale (it's not Barack's fault that he didn't have the "experience" of being married to a President for eight years, privy to all [well, almost all] the President's secrets).
Posted by True Blue Liberal at 3/13/2008 05:19:00 PM

Got mighty quiet about the issue once he actually had some influence in D.C. -and he also thinks it's just fine to threaten Iran with nukes...To bad he decided to allow Joe Lieberman to become his "mentor" in the Senate

And the sad fact is that Obama is actually somewhat to the right of Clinton on several issues, such as health care, energy/environment, and immigration. ...So what's a progressive to do?

I don't think Edwards should endorse either of them now - hold off and play his hand at the convention, after leveraging the most possible progressive changes from one of them...

If it were only a debate about issues, I'd agree with you that there'd be no harm in taking this to the convention, but I think that some lines have been crossed by the Clinton campaign, first with their 3am-Phone-Call ad right out of the Republican fear-mongering playbook, and now, even worse, with their attempt to marginalize Barack Obama as "the Black candidate" (even though he's won every lilywhite state). Their goals are traditional tactical goals of identity politics, but they will have tragic strategic effects in the general election if many see John McCain running against the reincarnation of Jesse Jackson or Al Sharpton.