Does the Spitzer Sex Scandal Hurt Hillary or Help Hillary? 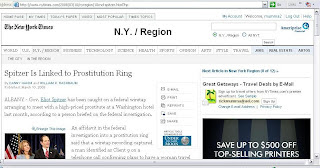 When this news about New York Governor Eliot Spitzer's rendezvous with an expensive prostitute in DC broke this afternoon, my first thought was that this was bad for Hillary Clinton, and not just because Eliot was a vocal supporter of Hillary's presidential candidacy. I simply figured that the last thing any Clinton wants is for the words "sex scandal" to appear in any headline during this campaign, especially regarding a scandal involving another Democratic Chief Executive.

“I have acted in a way that violates my obligation to my family and violates my or any sense of right or wrong. I apologize first and most importantly to my family. I apologize to the public to whom I promised better.
“I have disappointed and failed to live up to the standard I expected of myself. I must now dedicate some time to regain the trust of my family.”

But when I saw Eliot Spitzer's obligatory and stereotypically-weaselly public statement in print, I couldn't help thinking of similar appearances by another recent Democratic Chief Executive (no, not Jim McGreevey) and that Hillary Clinton will be seen sympathetically once again as the strong wronged spouse. I wouldn't be surprised to see her national numbers take a small quick uptick in the next few days.
If she does pull off the impossible and win the nomination and the election, maybe she should think about making Eliot Spitzer the US Attorney General. Not only was he a great Attorney General in New York for many years, often taking on national issues that Bush and Ashcroft ignored, but he and the first spouse could hit the town together -- keeping Bill out of the White House and out of Hillary's hair, leaving her undistracted when those important phone calls come flooding in at 3AM.
Posted by True Blue Liberal at 3/10/2008 04:21:00 PM

demoCRAPS can't keep there penises in there pants!!!

I want to believe that the first comment from "anonymous" is a joke. It's not the seemingly deliberate misuse of there for their, but it just seems too stereotypically wingnuttish (and would a real wingnut have correctly spelled penises?).

But whether written by an authentic nut or not, his or her point about Democrats and their uncontrollable penises loses its edge if the Democratic candidate in question has no penis at all. So I stand by my later paragraphs up above. I think Hillary gets a slight, temporary national bump from this scandal (even though she gets killed by Barack Obama in tomorrow's Mississippi primary).