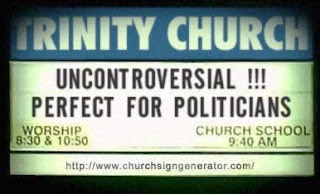 The Huffington Post has Barack Obama's obligatory mea culpa, "On My Faith and My Church", for statements that he never made. but were made from the pulpit of the church that his family attends in Chicago.

"All of the statements that have been the subject of controversy are ones that I vehemently condemn. They in no way reflect my attitudes and directly contradict my profound love for this country."

I hope we now don't have to hear the greatest hits of every preacher of the left and right who ever became angry and may lapsed into a rant that made parts of his or her congregation uncomfortable. A colleague at work told me on Thursday that Limbaugh and Hannity have been flogging Reverend Wright's most controversial quotations as evidence of Barack Obama's hidden anti-American, anti-White prejudices, so I knew that this response would be forthcoming (I'm sure that Barack would condemn some of the angrier statements in my blog too, but why should that be reason for him to reject my vote or support?).
Along with condemnations of Rev. Wright's most controversial sermons, his statement also tells us why he didn't quit the Trinity United Church of Christ:

"I made it clear at the time that I strongly condemned his comments. But because Rev. Wright was on the verge of retirement, and because of my strong links to the Trinity faith community, where I married my wife and where my daughters were baptized, I did not think it appropriate to leave the church." [emphasis added]

Here's my controversial statement about the matter: In my personal experience (and I'm older than Barack), I've never known an unmarried man who joined a church on his own, or joined a church other than his wife's when he did get married. According to the personal life section of Obama's biography on Wikipedia, he both started dating Michelle Robinson and started attending services at Reverend Wright's church in 1988. A coincidence? I don't see how those two events can possibly be unlinked. Am I now going to be asked to defend the crackpottiest statements of the Popes in Rome -- or defend child abusing priests or the murderers of abortion doctors -- because I happened to be married to a Catholic woman for 25 years?
I look at these facts and I see a man in Obama who is much like every man I've ever known -- a man who has religion in its (minor) place in his life. He was probably dozing off, or thinking about the White Sox, during many of those sermons.
Posted by True Blue Liberal at 3/15/2008 01:57:00 PM

It's not about the pastor. If Obama's THEOLOGY is seen for what it is the election is lost. See:
http://miraclesdaily.blogspot.com/