And if Geraldine Ferraro had been named Gerald Ferraro, would she have been a candidate for Vice President in 1984?

As a member of Hillary's finance committee, is she speaking for the campaign? Should she be forced out for driving this racial wedge within the Democratic party? Will she be? As ridiculous as this quote is, the line in the interview that leads into it is possibly more absurd:

"I think what America feels about a woman becoming president takes a very secondary place to Obama's campaign - to a kind of campaign that it would be hard for anyone to run against," she said. "For one thing, you have the press, which has been uniquely hard on her. It's been a very sexist media. Some just don't like her. The others have gotten caught up in the Obama campaign." [emphasis added] 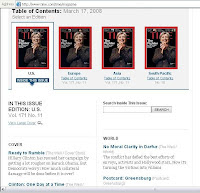 The myth of the mainstream media bias against Hillary is the biggest of the big lies out there at the moment. Just take a look at the absolute middle of the mainstream media: Time Magazine. On their website today for the March 17 issue on the newstands now, we see a happy clapping Hillary Clinton, "The Fighter," on the cover. The first five featured articles on the site have a decidedly pro-Hillary slant:

Ready to Rumble (The Well / Cover Story) Hillary Clinton has rescued her campaign by getting a lot rougher on Barack Obama. But Democrats worry: How much collateral damage will be done before it is over?
Clinton: One Day at a Time (The Well / Cover Story) On the day after her Ohio and Texas victories, TIME managing editor Rick Stengel caught up with Hillary Clinton to talk about the challenges ahead
NATION
The Long Way Home (The Well / Campaign '08 Obama) Barack Obama says he's "got game," but he'll need all his moves to stay ahead of Clinton
Obama: Still Confident (The Well / TIME Interview) In an interview with TIME's Jay Newton-Small, Obama talks about Hillary Clinton, double-standards, talking tough and going negative
The Race Goes On (In The Arena) By focusing on national security--and laughing at herself--Clinton managed to stay alive. Now it's up to Obama to prove he's not just another politician

It's easy to imagine from this cover and these article summaries that Hillary Clinton had just taken the lead (she hadn't) or at least narrowed the delegate gap (nope). You would never guess that the real story were those insurmountable Clinton leads in her safe firewall states of Texas and Ohio that were almost blown (until she pulled out the fear commercial and NAFTA lies). The real story was the way the media ignored 11 straight lopsided Clinton losses leading up to Ohio. If Obama had suffered 11 straight losses, the media would have been calling for him to step aside "for the good of the party" after loss number 5 or 6. But then again, Barack Obama was never their favorite. He was not nominated by the mainstream media before the first vote was even cast in Iowa. Hillary was. Hillary and Rudy (remember Rudy?) were on their way to the Democratic and Republican nominations without a serious challenge. Or so they told us. Those same media outlets are now having trouble coming to terms with the fact that the Clinton (right) wing of the Democratic Party is now well on its way to becoming the fringe rather than the center of the party.

But if a member of Barack Obama's finance committee were to say, "If Hillary weren't married to a President, she would not be in this position," how quickly would the media be calling for that sexist spokesperson's head? "And if she were a man (of any color) she would not be in this position. She happens to be very lucky to be who she is." (And so was Geraldine Ferraro.)