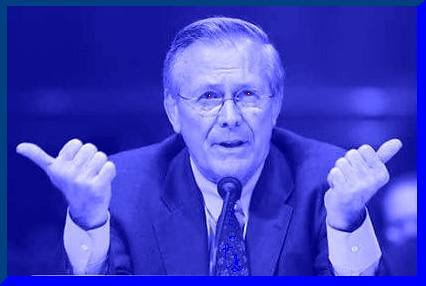 Here are the first and last paragraphs of an article you should read in full here: "Abu Ghraib Tactics Were First Used at Guantanamo" / Washington Post / 14 July 2005:

Interrogators at the U.S. detention facility at Guantanamo Bay, Cuba, forced a stubborn detainee to wear women's underwear on his head, confronted him with snarling military working dogs and attached a leash to his chains, according to a newly released military investigation that shows the tactics were employed there months before military police used them on detainees at the Abu Ghraib prison in Iraq.
The techniques, approved by Defense Secretary Donald H. Rumsfeld for use in interrogating Mohamed Qahtani [...] were used at Guantanamo Bay in late 2002 as part of a special interrogation plan aimed at breaking down the silent detainee.

[... the important middle of the article gives more details, shows how the techniques migrated from Gitmo to Iraq, and tells how generals protected generals in the military "investigation" of this systematic and systemic torture ...]
Some Republicans [...] said the alleged abuses occurred in just a small fraction of cases. They noted that there have been 24,000 interrogations at Guantanamo Bay and highlighted recent improvements at the facility. Sen. Pat Roberts (R-Kan.) called the Guantanamo abuse relatively 'minor incidents' that should not be a matter of national interest.[ ...how about INTERnational interest. Nuremberg Trials anyone?]

Look, just because Senator Pat Roberts, Republican from the flatlands, regularly wears women's underwear on his head and a dog leash around his neck while playing with his herd of snarling Dobermans, that doesn't mean the rest of us consider this government-sanctioned mistreatment of prisoners "minor" or "American" or "human". Amnesty International didn't go far enough in its condemnations. There are some generals and "intelligence" officers and analysts and interrogators and at least one cabinet member who need to be taking the place of Lynndie England and Charles Graner (whose only deviation from accepted operating procedures appears to have been the use of a digital camera) before the bar of justice.
Posted by True Blue Liberal at 7/14/2005 08:46:00 AM