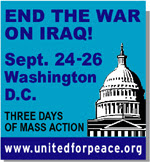 I was glad to get this e-mail in my mailbox this evening:

Statement about a joint rally and joint march for September 24

The two major antiwar coalitions that have initiated and organized for a massive anti-war March on Washington for September 24 have agreed to organize a joint rally followed by a joint march. Both coalitions will organize under their own banners, slogans, and with their own literature for the September 24 demonstration. The joint rally will begin at 11:30 am at the Ellipse in the front of the White House. We urge everyone around the country to unite and come out for the largest possible anti-war demonstration on September 24.

United for Peace and Justice

A.N.S.W.E.R. Coalition
(on behalf of the September 24 National Coalition)

There were worries that the two competing groups would divide the crowd and dilute the anti-war message. The fact that they have joined forces is very good news indeed.

Even if you can't make it yourself, you can help them spread the word on your blogs and webpages and emails. There are banners here. Please consider adding one to your sidebar for the next month.
Thanks,
TBL
Posted by True Blue Liberal at 8/19/2005 11:39:00 PM

Thanks for posting this- and yes, good news for sure....
I can't figure out how to put the banner from their site on my blog..could you lend me a bit of geek expertise ? my blog is http://watergatesummer.blogspot.com/
Keep up the good work....thanks.....

I certainly don't claim to have the skills of a geek, but here is the code that I added to my sidebar template:

BUT you must change the square brackets [ ] in this example to angle brackets < > for the code to work.

Good luck and thanks for spreading the word!