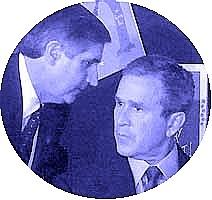 Andrew H. "Andy" Card, Jr., automobile industry lobbyist turned chief assistant to the CEO of BUSHCHENEYCo, Inc. (click for official bio here), could very well be remembered in the history texts and quotation anthologies of our future (assuming, optimists that we are, that we have a future) for two things: 1) the interruption of his boss's reading of My Pet Goat pictured to the right, and 2) the fact that he said to Elizabeth Bumiller of the New York Times that "you don't introduce new products in August." That quote certainly seems relevant to the Whiggate Update blog, which is getting a slow start in its first summer month of operation, but still planning to get the term "Whiggate" injected into the political dialogue of the nation in September. The article that included Andy Card's famous nugget of marketing wisdom is also a good recap of the way the White House Iraq Group (WHIG) worked in July and August of 2002 to implement the objectives of the Downing Street Memo (DSM) in the cynical runup to September 11 and 12. Though WHIG wasn't mentioned by name in this front page article (the mention of the group still has yet to make its first appearance in the Times!), three of its other prominent members are mentioned (Rove, Hughes, and Rice) in this early report on the most cynical product launch of the 21st century.

Click here for the full text on SF Indymedia for free, or here if you want to pay to read the whole thing for a fee from the New York Times, or just keep scrolling down if you want to read a lenghy block from this key reference: