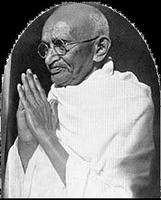 I received a reminder today that a company I deal with in India will be closed on Monday the 15th to commemorate the day in 1947 when India finally won its independence from Britain. What a great historical lesson. In the middle of a century that saw the most violent wars and the most destructive weapons in human history, we saw the most populous democracy in the world freed by nonviolence, by a brilliant but simple man who never wavered from his goal, or from the nonviolent means to his end. And here's the most heartening part of Gandhi's story, at least to me. He did not operate in a vacuum. He looked backward to Thoreau, the later Tolstoy, Christ, and his own religious tradition, and he had important descendants in the second half of the 20th Century in King and Mandela and millions of other peace activists and civil rights activists around the world. And his model is seen again in Crawford, Texas this week. These are the people I support. These are my ancestors. These are the people who make me proud to be human.

Gandhi did add a new word to the world's vocabulary with his successful technique of Satyagraha. Click on the preceding sentence, or click on the lengthy Wikipedia attempt at a definition which includes this summary:

Translators have rendered the word satyagraha as "civil disobedience", "passive resistance", "truth force", or "the willingness to endure great personal suffering in order to do what's right". English-speakers may also use the term "non-violent protest". The literal translation however will be sat(truth)+ aagraha(persuade) = sadagraha.

and this quotation from the man himself:

Satyagraha is utter self-effacement, greatest humiliation, greatest patience and brightest faith. It is its own reward.
Satyagraha is a relentless search for truth and a determination to reach truth.
It is a force that works silently and apparently slowly. In reality, there is no force in the world that is so direct or so swift in working.
Satyagraha literally means insistence on truth. This insistence arms the votary with matchless power. This power or force is connoted by the word satyagraha. Satyagraha, to be genuine, may be offered against parents, against one's wife or one's children, against rulers, against fellow-citizens, even against the whole world.

To give an idea of the concept's complexity, see Gandhi's epigrams about it on this page at mkgandhi.org.

*Satyagraha as conceived by me is a science in the making.
*It is claimed for satyagraha that it is a complete substitute for violence or war.

This is not George Bush's world. It's our world as long as we remain true to the great tradition that gave us Gandhi and King and Mandela and ...
Have a wonderful peaceful weekend,
True Blue Liberal
Tags:Gandhi;Satyagraha
Posted by True Blue Liberal at 8/12/2005 01:00:00 PM