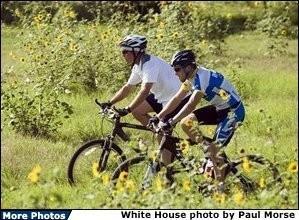 Here's the picture on the front page of The White House website this morning.
I love the way our athletic Vacationer- in- Chief has a half-wheel lead on the 7-time Tour de France winner, showing that Lance Armstrong is following the same groundrules given to the embedded reporters who are allowed to ride with the President, or that our Fearless Leader missed his true calling in life -- to become a bicycle racer!
Posted by True Blue Liberal at 8/22/2005 01:23:00 PM

If only we could have convinced George to follow his dream.....

August 17, 2005
State Dept. Says It Warned About bin Laden in 1996
By ERIC LICHTBLAU
WASHINGTON, Aug. 16 - State Department analysts warned the Clinton administration in July 1996 that Osama bin Laden's move to Afghanistan would give him an even more dangerous haven as he sought to expand radical Islam "well beyond the Middle East," but the government chose not to deter the move, newly declassified documents show.

In what would prove a prescient warning, the State Department intelligence analysts said in a top-secret assessment on Mr. bin Laden that summer that "his prolonged stay in Afghanistan - where hundreds of 'Arab mujahedeen' receive terrorist training and key extremist leaders often congregate - could prove more dangerous to U.S. interests in the long run than his three-year liaison with Khartoum," in Sudan.

The declassified documents, obtained by the conservative legal advocacy group Judicial Watch as part of a Freedom of Information Act request and provided to The New York Times, shed light on a murky and controversial chapter in Mr. bin Laden's history: his relocation from Sudan to Afghanistan as the Clinton administration was striving to understand the threat he posed and explore ways of confronting him.

Before 1996, Mr. bin Laden was regarded more as a financier of terrorism than a mastermind. But the State Department assessment, which came a year before he publicly urged Muslims to attack the United States, indicated that officials suspected he was taking a more active role, including in the bombings in June 1996 that killed 19 members American soldiers at the Khobar Towers in Dhahran, Saudi Arabia.

Two years after the State Department's warning, with Mr. bin Laden firmly entrenched in Afghanistan and overseeing terrorist training and financing operations, Al Qaeda struck two American embassies in East Africa, leading to failed military attempts by the Clinton administration to capture or kill him in Afghanistan. Three years later, on Sept. 11, 2001, Al Qaeda struck the World Trade Center and the Pentagon in an operation overseen from the base in Afghanistan.

Critics of the Clinton administration have accused it of ignoring the threat posed by Mr. bin Laden in the mid-1990's while he was still in Sudan, and they point to claims by some Sudanese officials that they offered to turn him over to the Americans before ultimately expelling him in 1996 under international pressure. But Clinton administration diplomats have adamantly denied that they received such an offer, and the Sept. 11 commission concluded in one of its staff reports that it had "not found any reliable evidence to support the Sudanese claim."

The newly declassified documents do not directly address the question of whether Sudan ever offered to turn over Mr. bin Laden. But the documents go well beyond previous news and historical accounts in detailing the Clinton administration's active monitoring of Mr. bin Laden's movements and the realization that his move to Afghanistan could make him an even greater national security threat.

Several former senior officials in the Clinton administration did not return phone calls this week seeking comment on the newly declassified documents.

Adam Ereli, a spokesman for the State Department, said the documents should be viewed in the context of what was happening globally in 1996, rather than in the hindsight of events after the Sept. 11 attacks.

Before the East Africa bombings in 1998, however, Mr. bin Laden "wasn't recognized then as the threat he is now," Mr. Ereli said. "Yes, he was a bad guy, he was a threat, but he was one of many, and by no means of the prominence that he later came to be."

The State Department assessment, written July 18, 1996, after Mr. bin Laden had been expelled from Sudan and was thought to be relocating to Afghanistan, said Afghanistan would make an "ideal haven" for Mr. bin Laden to run his financial networks and attract support from radicalized Muslims. Moreover, his wealth, his personal plane and many passports "allow him considerable freedom to travel with little fear of being intercepted or tracked," and his public statements suggested an "emboldened" man capable of "increased terrorism," the assessment said.

While a strategy of keeping Mr. bin Laden on the run could "inconvenience" him, the assessment said, "even a bin Laden on the move can retain the capability to support individuals and groups who have the motive and wherewithal to attack U.S. interests almost world-wide."

Tom Fitton, president of Judicial Watch, said the declassified material released to his group "says to me that the Clinton administration knew the broad outlines in 1996 of bin Laden's capabilities and his intent, and unfortunately, almost nothing was done about it."

Judicial Watch, a conservative legal group, was highly critical of President Clinton during his two terms in office. The group has also been critical of some Bush administration actions after the Sept. 11 attacks, releasing documents in March that detailed government efforts to facilitate flights out of the United States for dozens of well-connected Saudis just days after the attacks.

"The analytical side of the State Department had it exactly right - that's genius analysis," he said in an interview when told of the declassified documents. But Mr. Scheuer, who wrote a book in 2004 titled "Imperial Hubris," under the pseudonym "Anonymous," that was highly critical of American counterterrorism strategies, said many officials in the C.I.A.'s operational side thought they would have a better chance to kill Mr. bin Laden in Afghanistan than they did in Sudan because the Sudan government protected him.

"The thinking was that he was in Afghanistan, and he was dangerous, but because he was there, we had a better chance to kill him," Mr. Scheuer said. "But at the end of the day, we settled for the worst possibility - he was there and we didn't do anything."

Dear Anonymous,
Thank you for your input. You have quite the writing style and may even have a future with the New York Times!
How could I have been so stupid to have missed the fact that everything is Bill Clinton's fault?? How could I have thought that George Bush's ignoring of Bin Laden when he became president (in favor of his crusade against the satanic Saddam), and ignoring of specific threats in August 2001 (while he was on, surprise, vacation) could have contributed at all to our current predicament?
I'll remember in the future: Blame Bill, specifically Bill's libido, if anything else goes wrong in the world in the remainder of the 21st century. Thanks again Anonymous for setting me straight. I see the lite of troof and of fiery jeebus!! Ich Bin ein (neo)Konservative!