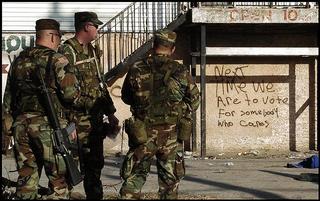 What an interesting photo....I concur on the sentiment (of course I never voted for Bush the first two times).
I hope something good does come out of this tragedy by making politicans more accountable to the people. Though I still wonder if the Dem's are strong enough to really clean out Congress. The country is quite divided and I don't know, I've seen Bush down and still come up fighting - that's what happens when you have Karl Rove on your team.

This photo taken in in the great Democratic State of Louisana. Is referring to the pitiful job their Governor (I don't have a clue)Blanco and (Wasted away in the Superdome) Mayor Ray Nagin. This state's democratic hold is going bye bye. The I love the Terrorist's and Hate America Party will only lose more seats to the Republicans this year.

Hi Alan. Thanks for stopping by and straightening me out once again. How could I have been so silly? The fact that FEMA has become a home for rewarding political hacks (and failed horse show executives) had nothing to do with the slow response, nor did the fact that the entire head of the executive branch (Bush Cheney Rice et al.) was on vacation or giving speeches comparing Iraq II to WWII while New Orleans sank.
The spin on the Right is to blame the locals now, but no one said anything negative about the local and state response until a light was shone on the slow response of the Bushies. But here's the thing that really mystifies me. After his father was hurt by the slow response to Andrew, how could the son make the same mistake (only worse)?

Critics say President Bush's personal response to the Hurricane Katrina disaster was too little, too late - with an Air Force One flyover the day after New Orleans' levees broke and a trip to Baton Rouge two days later.

President Clinton, on other the other hand, got glowing reviews for responding to his administration's biggest disaster, the Oklahoma City bombing - even though he took a day longer to arrive on the scene than Bush did last week.

New Orleans' levees broke on a Tuesday - and Bush had his own boots-on-the-ground just three days later on Friday.
When the Alfred P. Murrah Building exploded on Wednesday morning, April 19, 1995, President Clinton didn't travel to the scene for four full days.

And when he finally arrived, there was no grumbling by troubled pundits about the delay. In fact, Clinton's response to Oklahoma City is remembered to this day as the turning point of his political fortunes.

"With breathtaking subtlety and nimbleness, Clinton used that act of terrorism to illustrate the dangers of the wild-eyed anti-government rhetoric then in vogue among the Gingrichian GOP - a move that set him on the road to political redemption."

The real difference, of course, was that Clinton had a sympathetic media that was just as anxious as he was to blame the disaster on right wing Republicans. Bush, on the other hand, faces a press corps that couldn't wait to use Katrina against him.

The double standard becomes even more obvious when reaction to Katrina is compared with what remains the worst law enforcement debacle in U.S. history - the Clinton administration's decision to rout the Branch Davidians from their encampment at Waco.

More children were killed in that April 19, 1993, assault than died in Oklahoma City. Yet the Clinton administration received little if any blame - and no one was forced to resign.

In fact, after then-Attorney General Janet Reno publicly accepted responsibility, she was hailed as a hero by sympathetic reporters, an irony that's likely not lost on Bush's allegedly "disgraced" ex-FEMA Director Michael Brown.

Alan, Your sentence structure, grammar, punctuation, and spelling are all significantly improved in this comment. Congratulations! However, if I were an English teacher I would suspect a degree of plagiarism. Only the telltale knee-jerk Clinton bashing shows that every word of this must have been written by you.
And you're absolutely right. George W. Bush would have responded much more quickly than Bill Clinton to the Oklahoma City bombing. He would have bombed Baghdad the very next day.