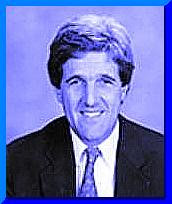 CLICK HERE for the full text of the speech that John Kerry will be giving at Brown University today. Here's a sample from the heart of the speech:

"[...] Katrina is a symbol of all this administration does and doesn't do. Michael Brown -- or Brownie as the President so famously thanked him for doing a heck of a job - Brownie is to Katrina what Paul Bremer is to peace in Iraq; what George Tenet is to slam dunk intelligence; what Paul Wolfowitz is to parades paved with flowers in Baghdad; what Dick Cheney is to visionary energy policy; what Donald Rumsfeld is to basic war planning; what Tom Delay is to ethics; and what George Bush is to “Mission Accomplished” and "Wanted Dead or Alive." The bottom line is simple: The "we'll do whatever it takes" administration doesn't have what it takes to get the job done.

This is the Katrina administration.

It has consistently squandered time, tax dollars, political capital, and even risked American lives on sideshow adventures: A war of choice in Iraq against someone who had nothing to do with 9/11; a full scale presidential assault on Social Security when everyone knows the real crisis is in health care - Medicare and Medicaid. And that's before you get to willful denial on global warming; avoidance on competitiveness; complicity in the loss and refusal of health care to millions.[...]"

I have one problem with this speech. Why can't he call himself a liberal? Why can't he draw the battle lines clearly and take a side, rather than conceding the center to the "conservatives"? It may be a small quibble, but it's my quibble. Hell, it's my raison d'être. True Blue LIBERAL
Posted by True Blue Liberal at 9/19/2005 01:53:00 PM

Why can't he call himself a liberal?

Because he's a politician of the stripe who believes people want someone close to the Center. It's what killed him in '04.

I concur on liberal label sentiment. I wish Kerry had just drawn the line - I think he would have done better to have just come out and say "yes I'm a liberal and there is nothing wrong with that!" People want a strong leader, why do you think Dean was so popular?

Fixer and Virginia Gal hit it right on the head, and those are some of the reasons Kerry lost the close race to that idiot Bush.

Kerry running again is not a good idea in my opinion and I also think the Democrats need to get someone up front NOW and not wait until the last second.

This country needs real leadership and a clear vision, Iraq and Hurricane Katrina underscored that like nothing else has.

It would behoove the Democrats to put together a plan and put forth the candidates NOW, show some confidence and backbone on the fact that Bush and his gang are incompetent and WILL be replaced, not just NEED to be replaced.

Just that demostration alone could put the final holes in that Republican ship that so far seems to be able to ram the reef without any repercussion.

Hope to see yall in DC this weekend for the Peace Rally.

Name two actual heroes in public life that you look up to. Try it. It's godawful difficult these days, when everyone you want to believe in turns out to have those feet of clay.

I used to have one, though. When I was a kid during the Vietnam conflict, I listened to and looked up to a guy who had been in it, been shot at, been decorated a few times, and then came back and told the country straight out that the war was for nothing, the cause was horseshit and troops should come home. He had far more credibility then than the demonstrators who hadn't gone. He was John Kerry, and years later when that same guy actually got himself elected to the Senate, I thought, "Whoa. There might be hope."

I think the worst thing John Kerry did in the last couple of years was disown the man I respected and revered when I was 18. He still had my vote, but it was a vote against Bush more than it was a vote for that new Kerry. Very sad.

Dear S.C.,
The first peace demonstration I went to was in D.C. on 4/24/1971. The following week John Kerry and the VVAW took over the Mall and the Capitol and made their case to Congress and the American people (as recorded in the book The New Soldier). You knew then that Kerry was going to be a politician. He looked like a younger Kennedy among the crowd of hippies and angry vets. Even his fatigues looked pressed. The same things I didn't quite trust about him then are the things that came to the fore in 2004. None of the heroes I look up to in public life are office holders. There's a kind of soul death that takes place when you have to sell yourself like a product to people who watch TV.
Gandhi. Mandela. King. Those are the first names that pop into my head when I think of public heroes.